Credit where it's due: Hamster's really, really committed to scraping every last crusty barnacle from the bottom of the Nintendo arcade barrel, regardless of demand, quality or potential profitability, and today's release is something hardcore collectors have struggled to source for many years, so there's a small audience out there who'll be thrilled to see this show up on their eShop splash screen. As for everyone else... that Night Slashers is pretty baller, I tell ya what.

What's this? The little-played Vs. System conversion of the black-box Nintendo game the world loves to hate, now featuring a extra tune or two, a score counter and not much else. Punch a dude, dodge a flowerpot, switch off and grab your copy of Gumshoe.

Why should I care? This particular version of the game has never dumped, so this release signifies the first step towards publicly preserving the ROM, if nothing else.

Useless fact: Urban Champion might be the only game in Nintendo's stable that they're willing to use as a punchline.

What's this? ADK's first racing game for Neo Geo, released in 1990; players can choose to jockey for position in the championship mode or race for times on the marathon Paris-Dakar rally course.

Why should I care? You're tired of Over Top and you're sick of waiting for Neo Drift-Out to show up.

Helpful tip: Thrash Rally is the third of three Neo Geo games to use the connector jack for linked-cabinet multiplayer, and as with those other titles, the link cable functionality has not been recreated for the Arcade Archives version.

What's this? A horizontal shooting game given limited release in arcades by Data East in 1986 and ported elsewhere in subsequent years, most notably to the NES; players are tasked with driving a dune buggy through stages packed with enemies and hazardous terrain, with skilled acceleration/deceleration being the key to mastering your buggy's jump.

Why should I care? You're intrigued to try one of the more conventional games from Data East's peak weird era.

Useless fact: Apparently the ZX Spectrum is famed for having absolutely no hit detection on the buggy while jumping, meaning you can beat the entire game with no effort by simply holding down the jump button and never letting go. Yeah, that sounds about right.

What's this? A gory horror-themed brawler, released in arcades by Data East in 1993 and resurrected for the first time today; one or two players set foot on a quest to pound the guts out of a menagerie of draculas, teen wolves and slasher villains using a variety of incredibly silly attacks, interspersed with the occasional zombie-pulverising minigame.

Why should I care? You're a sucker for pixel-art splatter, you're looking for an unsung arcade brawler or you just want to ride a zombie like a surfboard until its skull explodes.

Helpful tip: Each character has a certain selection of favorite foods that determines how much life they'll get from a health pickup; for whatever reason, Jake's preferred foods are quite infrequent, which makes his path through the game significantly tougher than that of the other two characters.

What's this? A port of one of the ZX Spectrum's most fondly remembered titles, released way back in 1985; this version, based on original creator Clive Townsend's enhanced remaster from 2015, maintains the color-bleeding visuals and flip-screen, side-scrolling stealth action of the original game and adds additional screens, flavour text and the option to choose a C64-esque graphics set.

Why should I care? When's the last time you saw a ZX Spectrum game show up on a modern game console? Rare Replay?

Useless fact: Not only is Saboteur II scheduled for a port in the near future, both releases are said to be paving the way for a brand-new Saboteur III.

AtariAge had plenty of original homebrew games and homebrew conversions to announce at Portland Retro Game Expo, including a 2600 version of the Game Boy homebrew game Sheep it Up! and an approximation of Nintendo's Balloon Trip sub-game, but the one that most caught my eye was their new 2600 conversion of Namco's arcade classic Mappy, primarily because... well, it's Mappy — like, all of Mappy, on Atari 2600, even the music!  — and all it took was some clever coding, a relatively large rom and one of those fancy chips they gave David Crane for Pitfall II. It's a port that's roughly 35 years too late, but appreciated all the same.

The Game Console: A Photographic History from Atari to Xbox by Evan Amos

You probably don't recognize Evan Amos by name but you'll certainly recognize his work: he's the guy who's devoted a significant chunk of his free time to making sure Wikipedia and the broader internet is sourced with clean, informative and accurate stock photos of video game hardware, and now he's collected his work in an easy-to-digest guide to the consoles and handhelds of the 20th century. Whether you want to repay him for his work or just appreciate the craft behind taking a decent photo, this book's worth a gander. 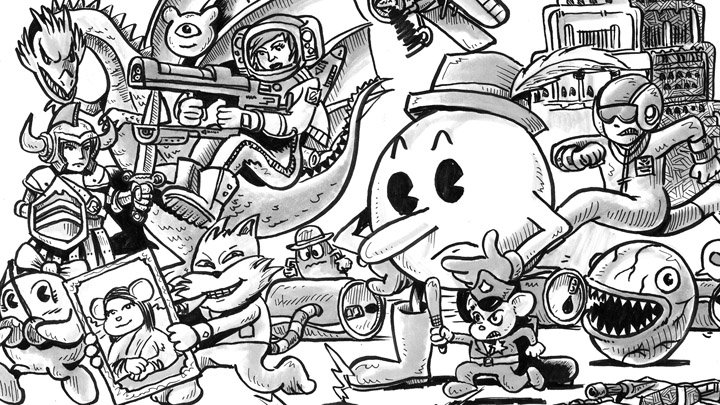