I present to you, the final pre-xmas re-release roundup! If you're still scrambling to pick up a gift for a friend or a loved one, fear not: Sonic 4 is as cheap as it's ever been.

What's this? The generation-hopping sequel to Nintendo's arcade juggernaut, released in 1982;
players control the unholy spawn of Donkey the first on a quest to save pops from the evil Mario,
with a new climbing action available in both the one- and two-handed variety.

Why should I care? The Arcade Archives release of DK Jr. is yet another arcade-emulation first for
Nintendo, and the game itself adds a fun splash of complexity to the fixed-screen platforming
with the new climbing mechanic.

Useless fact: While the name "Mario" was first adopted for the external marketing of the original
Donkey Kong, it wasn't christened in-game until the sequel.

What's this? The first entry in Taito's long-running and long-imitated series of fixed-screen
action-puzzle games, originally released in arcades in 1994; players are tasked with erasing the
endless morass of bubbles that descend from the top of the screen by shooting same-colored
bubbles from the bottom, with quick movements and steady aim being the key to success.

Why should I care? You like the cutesy Bobble Bubble characters, or you're just curious to try
that one game that "inspired" every second browser/mobile game for the last fifteen years.

Useless fact: The original arcade version of Puzzle Bobble ran on dedicated Taito arcade
hardware, with the Neogeo version being produced specifically for the overseas audience, but
even in Japan the MVS version is significantly more common than the arcade board.

What's this? Yet another Japanese microcomputer remake from the maniacs at Mindware, this one
taken from the very first issue of Micom BASIC Magazine released back in 1981; in addition to the
original PC-8001 game, this procedurally-generated dot-eater also includes a new version arranged to a slightly enhanced hardware spec and a brand new remake with contributions by, among other people, renowned golden-age Namco composer Junko Ozawa.

Why should I care? While I can't speak to this particular game, I can say that Mindware's track record for unearthing interesting and important Japanese microcomputer games is solid and the additional modes produced for these ports usually elevate the game to being something non-fanatics can endure.

What's this? A bumper collection that contains almost every Famicom & NES game in the Kunio-kun
library, with the NES Double Dragon trilogy thrown in for good measure; in addition to online
multiplayer for every title, this collection also features unlockable profile pictures/quotes and
an optional enhanced version of each game that disables sprite flicker, fixes bugs and adds other
game-specific tweaks. (The announced Steam version seems to have been delayed...)

Why should I care? This package promises a very convenient way to experience a varied, and in
some cases quite rare, selection of consistently entertaining action games across a variety of
genres

Useless fact: There are, by my blurry-eyed 3AM count, three Kunio-adjacent games missing from
this collection. Care to guess what they might be? 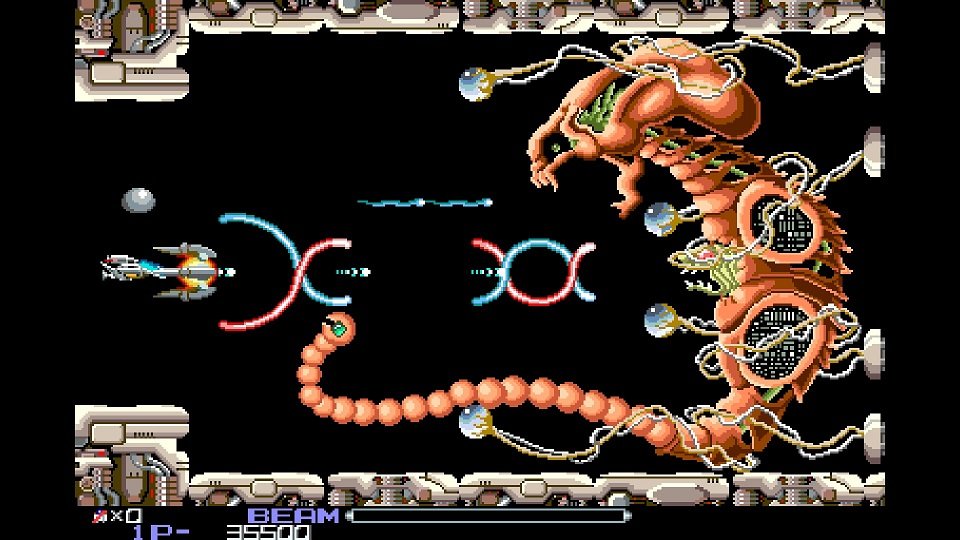 What's this? A double-pack containing ports of the first two entries in Irem's classic horizontal
shooting game series, originally released in the late '80s and remade for this particular
collection way back in 2009; in addition to Dimensions' signature gimmick — the ability to toggle
between the original graphics and HD visuals in real time — this particular iteration includes
local two-player co-op and several optional tweaks to make the games easier to clear, including
infinite lives, instant respawns, a rewind function and a stage select. (Yes, this is the same
one that hit Switch and PC a couple weeks back.)

Why should I care? These ports mightn't be the least bit arcade-authentic but they nonetheless
provide a perfectly fine and extremely beginner-friendly avenue to experience a pair of classic
and widely imitated arcade games... just don't be surprised if the HD visuals come off as even
more dated than the '80s dot art.

Useless fact: Despite being ported to over a dozen platforms and reissued in various formats on
Virtual Console, the original arcade version of R-Type has only ever been re-released in emulated
form as a smartphone app.

You've all bought Sonic Mania by now, right? No? Well then, now's your chance to pick it up and
get a dozen other Sonic games for your trouble, almost half of which are quite good!