The centerpiece of today's roundup, the M2-developed Darius Cozmic Collection, is something I'm wholly ambivalent about — not because it's off-puttingly expensive, and not even because it's awkwardly split between retail-only, no-size-fits-all SKUs, but because they left off G-Darius, one of the stronger games in the series and the obvious bookend to what could have been a comprehensive anthology. Darius Alpha and Sagaia Master System are cool, but not let's-skip-over-G-Darius cool.

What's this? A light-hearted platformer starring "the most radical ninja" and his quest to rescue a princess from a goofy youkai army, developed and released in arcades by Irem in 1986. (You might vaguely recall this game already being released for PS4 well over a year ago... well, they didn't get around to actually adding it to North American PSN until now.)

Why should I care? Kid Niki is a respectable counterpart to contemporaneous post-Super Mario arcade platformers like Wonder Boy and Alex Kidd and the Lost Stars and while it offers a reasonable challenge, it's far more forgiving than Irem's usual fare.

Helpful tip: If you see a particular Arcade Archives title mentioned on the roundup that doesn't seem to be out for your chosen console in your region, that's all on Hamster — they have a habit of announcing games and release dates, particularly for North American PS4 owners, that simply don't sync up with reality, as is the case with Kid Niki. Don't ask me what's up, I'm just the messenger.

What's this? The fourth and final(ish) Super Sidekicks game, released in 1996 and now sporting even heavier rotoscoping and faux-3D elements, a new meter-based mechanic that allows you to make extremely powerful kicks when full, a simplified player type system and a whopping 80+1 teams.

Why should I care? You've seen how much the cartridge goes for, or you just want a reminder of how 2D game design could sometimes bend a little too hard to accommodate the latest takes on character animation. (Translation: the sprites are too dang big.)

Helpful tip: If you can score 15 goals and concede none within the first three rounds of the SNK Championship mode you'll get to face the hidden "SNK Superstars", a team of individuals named after characters from SNK's various fighting games. Look out for the bless-em-they-tried Joe & Yuri sprites in the stands whenever you score!

What's this? A vertical sci-fi shooting game developed and published in arcades by Data East in 1987 as a sequel to the previous year's Darwin 4078; SRD combines the tried-and-true shot-and-bomb game system from Xevi... uh, B-Wings, with a powerup system that sees the player ship's shape and weaponry drastically changing in size and shape as it "evolves". (The game's no looker but it's not nearly as ugly as Johnny Turbo's screenshots would have you believe.)

Why should I care? You enjoy exploring Data East's outlandish genre experiments and you're perfectly willing to accept that they don't always turn out so well.

Useless fact: If you've never played SRD but the name Darwin is rattling around in your brain, you may have touched the Mega Drive game Darwin 4081 at some point, which arranges and combines elements of SRD and its predecessor.

What's this? The second and most widely-played entry in Bungie's pre-Halo trilogy of 2.5D first-person shooters, which began life on Apple Macintosh in 1995; this version, released on Xbox 360 in 2007, benefited from a massive amount of technical improvements including framerate and resolution bumps, support for 4-player split-screen multiplayer as well as 8-player multiplayer via system link or Xbox Live, a new console-friendly HUD, sporadically updated graphical assets and more.

Why should I care? As 2.5D shooters, the Marathon games offered a curious physics-heavy counterpart to Doom's performance-centric mania and Duke Nukem 3D's clunky attempts at mise en scene; as precursors to Halo, Marathon reflects Bungie's predisposition to convoluted lore-mongering via the prism of '90s sci-fi pulp, with Durandal in particular offering the most accessible and balanced mix of atmosphere, navigation puzzles and encounter design. The X360 version, great as it was, has since been eclipsed by the freely-available Aleph One ports for PC, but if you'd prefer to play on a console then it remains a perfectly viable option.

Useless fact: Marathon: Durandal may be the only worthwhile console version of Marathon but it's not the only one to exist — Bungie and the world at launch has sought to forget about Super Marathon, a Marathon / Durandal two-pack released exclusively for the short-lived Apple Bandai Pippin.

What's this? An emulated collection of titles from Taito's classic mechaquatic shooting game series, Darius, spanning from 1986 to 1994; programmed by the fanatics at M2, this collection includes painstaking emulation of each game alongside additional features including screen options, save states, additional control settings including autofire, and, for the arcade titles, online leaderboards, replay sharing, dip switch settings and per-game "gadgets" that display additional data on the unused portions of the screen. (The package seen above includes a new all-star arrange CD, a collection of mini arcade marquees and a reprint of an old artbook that now contains a bevy of new developer interview with the creators of both the original games and the console ports.)

Which titles are included? The standard package includes the "old", "new" and "extra" revisions of the original three-screen arcade Darius, the two-screen arcade version of Darius II, both revisions of the overseas-only remix Sagaia and the arcade version of Darius Gaiden; the special edition contains all of the above and also includes the Super Famicom and SNES versions of Darius Twin, the Super Famicom game Darius Force (released overseas as Super Nova), the Mega Drive version of Darius II, the Master System version of Sagaia and the PC Engine title Darius Alpha, a boss rush game produced in extremely limited quantities as a sweepstakes price for the PC Engine CD port Super Darius.

Why should I care? As exploitative and Japan-centric as this collection may seem, Darius Cozmic Collection promises a premium experience for a handful of games that deserve deluxe treatment but either weren't port-friendly until now or were too obscure to ever dredge up.

Useless fact: Despite the fact that you can't buy this collection on the eShop, there is one bonus game that's digital-only: the Game Boy version of Sagaia, which was given away as part of an Amazon Japan promotion and is completely impossible to get unless you happened to pre-order the special edition during a specific two-day window eight months ago. Oh, Japan.

By now I'm sure many of you are familiar with, if not owners of, 8bitdo's Super Nintendo-style SN30 controllers, which merge classic SNES-style layout and feel with compatibility with modern platforms including Nintendo Switch, so it stands to reason that the M30 requires little description: same concept, different controller, in this case the Sega Genesis/Mega Drive's six-button pad, plus a pair of shoulder buttons and some extra features like a no-fuss turbo setting. The M30 will come as stock with the impending Analogue Mega SG but, unforeseen defects notwithstanding, their utility as a standalone multi-purpose pad should be self-evident

Unsurprisingly, Fangamer's initial suite of Katamari Damacy character goods were a hit, so they're back with more, including a sweater, a strapback cap, a spinning pin and perhaps most importantly, a plush Prince pushing a plush katamari packed with magnets that you can use to attract all sorts of detritus, as seen above. 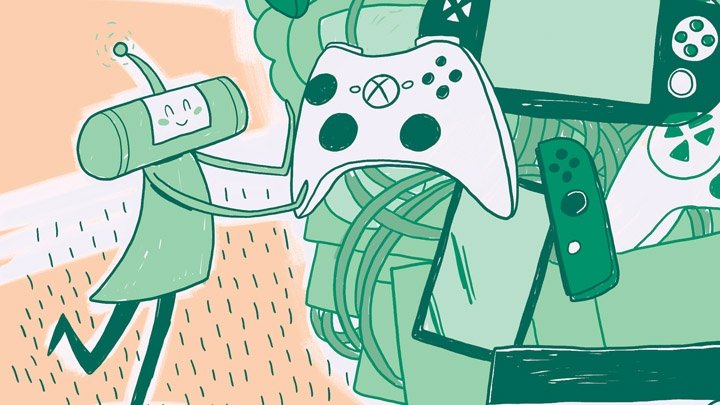