This week's roundup is marqueed by a surprise release: Baldur's Gate: Dark Alliance, announced today and released tomorrow for the console of your choice, and ported by Black Isle Studios mk.eight jillion. Who knew Interplay still had it in 'em to do, like, anything? 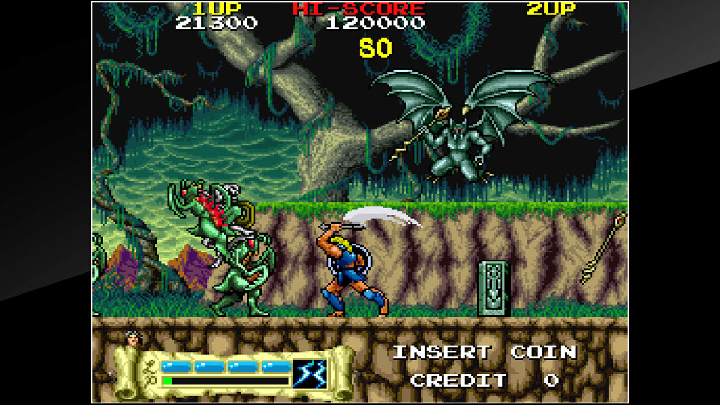 What's this? A side-scrolling, sword-and-sorcery action game for one or two players, developed by Aicom and distributed in arcades in 1989, with a loose follow-up released for NES the following year; the game's most distinct mechanical feature is a charge gauge that lights your axe on fire if you go without swinging for a second or two, forcing the player to trade off between rapid swings or single, powerful strikes (a system that would be refined by Aicom's Turbografx-16 title The Legendary Axe).

Why should I care? You missed out on one of the stronger games released during the short-lived era of Conan-likes, or you enjoyed the NES version and want to compare it to its vastly more macho big brother. (The game also takes a hard turn into H.R.Giger territory in the final stage, which would be a spoiler if not for the fact that it's a Japanese arcade game from the late '80s.)

Useless fact: At a glance, The Astyanax might strike one as more Rastan-esque than the actual sequel to Taito's Rastan, and that thought wouldn't be unfounded: OG Rastan director/artist Toshiyuki "Nenko" Nishimura also handled graphics and game design for this game, while a completely different team at Taito was making the thoroughly underwhelming Rastan Saga II.

What's this? The third entry in a long-running series of detective adventure games centered around a game developer working as assistant to a detective agency, developed and published by And-Joy and Genki for Japanese feature phones from the early '00s; in this volume, the mystery is centered in ominous, cult-like letters being sent to the receptionist at the "Shangri-la" amusement park, with the park owner hoping to settle the case without involving the authorities.

Why should I care? If G-MODE would just give me a minute to play these games, I'd tell ya!

Useless fact: I got nothin', and I suspect I won't have anything for the dozen more of these games that are undoubtedly coming, but I'll try.

What's this? The first console-centric entry in Interplay's Baldur's Gate series of D&D-rooted RPGs, originally released in 2001 for PlayStation 2 and subsequently ported to Xbox and Nintendo Gamecube. While the core series was handled by Bioware, the first game in this sub-series was handled by Snowblind Studios and set itself apart from its PC forebears via its adoption of polygonal 3D graphics and a fully real-time combat system that places it squarely in the Diablo realm. (This reissue, announced mere hours ago, seems to be an extremely simple port with local-only co-op and no additions or enhancements save for widescreen/4K support; PC and mobile versions are also scheduled for later this summer.)

Why should I care? The loot treadmill RPG sub-genre is not one I've kept up with, nor one I have a particular taste for, so I cannot tell you whether this particular game holds up against modern games of its ilk, but I can say Snowblind's oeuvre, which included Champions of Norrah and Lord of the Rings: War of the North, among a few other titles, were the frontrunners of the sub-genre on the consoles of their day, and I suspect their appeal is somewhat future-proof.

Useless fact: The original Dark Alliance was never ported to PC but publisher Interplay did make some very preliminary enquiries about a potential PC port with a fledgling Polish studio named CD Projekt...

What's this? A port of the most recent version of the fourth mainline game in the venerable military-themed vertical shooting series Raiden, originally released in arcades in 2007 and iterated on across Xbox 360, PlayStation 3 and PC until 2014; alongside all the content from the PC/PS3 versions Raiden IV: Overkill, this port's sole new feature is an additional arranged soundtrack contributed by musicians associated with the classics-focused Japanese arcade chain Mikado, including a band helmed by former Raiden series composer Go Sato.

Why should I care? If you've not sampled Raiden since the pixel-art days then you're in luck: this is widely regarded as the most enjoyable Raiden game of the polygonal era, both in terms of looks, design and overall feature suite. As for players looking for an excuse to revisit the game, I can only hope you have a taste for garage-band dad rock.

The late-'90s mania for Sakura Taisen in Japan saw it receive a multitude of cross-media and ancillary product, the more prominent of which being a pair of versus puzzle games that saw the casts of the first two games duking it out via a battle-centric remix of Sega's tried-and-true falling-block game Columns. Naturally, neither game — the first a Sega Saturn game which was back-ported to arcades, the second a Dreamcast exclusive — made it overseas in their day, but the Sakura Taisen fans of today have spared no effort in producing as comprehensive a translation for the second game as possible: not only have they translated every possible asset, they've even translated the VMU screens, created an English version of the website accessible via the in-game browser and made it possible to access the game's DLC, as well as a full-unlock save file. (The game's online multiplayer, which originally required a paid subscription, has yet to be reverse-engineered and thus remains non-functional.)