Sadly, this week's roundup had to exclude an exciting game at the last second: Wizardry Gaiden:The Five Ordeals, a remake of the final game in the Japan-only Wizardry Gaiden sub-series that was set to hit Steam Early Access tomorrow but has been indefinitely postponed due to what appears to be a rights dispute with one of the nebulous, unidentified entities that claims to own a stake of the Wizardry brand. Oh well, hope ya like dodgin' stuff. 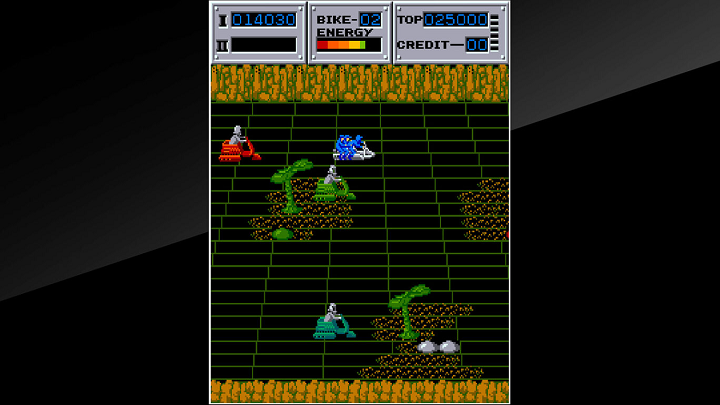 What's this? A vertically-oriented, horizontally-scrolling shooting game with racing game elements, originally distributed in Japanese arcades by Nichibutsu in 1984 under the title Sector Zone and remade for Famicom and NES in 1986 bearing the international title, Seicross. The player is tasked with shooting enemies, nudging rival riders and rescuing people as they drive across alternating slow- and fast-scrolling stages; firing shots drains the bike's energy, and while rescuing more people will power up your shot and deliver a bigger end-stage bonus, it'll also cause your energy to drain faster, resulting in automatic death if and when it's depleted.

Why should I care? You're willing to sacrifice the relative viewability, playability and fairness of the NES version for a hit of that signature early-'80s Nichibutsu perspective futzery.

Useless fact: I wasn't aware of this until I sat to write this roundup, but the Japanese reading of "seicross" is identical to a particular online slang word for sex, and there's some (okay, a little) debate about the etymology of the word and whether it existed in that context before the release of Seicross or whether the word was introduced by the Famicom game.

What's this? An original action game in Jaleco's signature comical ninja series, released on the Jaleco Garesso feature phone subscription service in 2004; themed around the four seasons, JaJaMaru-kun must fight his way through yokai-infested stages using new abilities like a wall jump, a tackle and a power gauge that amplifies his attacks.

Why should I care? JaJaMaru-kun's arguably never looked better in pixel-art form, and while this game runs as smoothly as you'd expect an early-'00s phone game to run, it was clearly designed in a manner that doesn't demand a lot of the player, so it's not as frustrating as one might presume it to be.

Useless fact: This particular game did receive a direct sequel, and I expect we'll be seeing it on G-MODE Archives very soon.

What's this? A surprise port of the first entry in arcade shooting veterans CAVE's insect-themed vertical shooting series Mushihimesama, originally released in Japanese arcades in 2004 and subsequently ported to PlayStation 2, iOS (released internationally as Bug Princess), Xbox 360 and Steam; this port is identical to the X360 and Steam versions and contains additional novice and arrange modes on top of the standard arcade mode, presented here with the original HD-resolution graphical assets, and not the crunched-down versions present in the original arcade release, and also includes the 1.5 "Matsuri" arrange mode (only available as paid and/or first-print DLC for the other ports) as part of the base package.

Why should I care? Perhaps more than any other CAVE series, Mushihimesama is designed to allow players to mix and match difficulties and game modes in order to customize the game's difficulty to their own liking — it's a very newcomer-friendly bullet hell game that will continue to scale as you become better and more comfortable with the game, and one you can essentially play without the bullet hell elements if you'd prefer something more traditional.

Helpful tip: Setting up Mushihimesama's vertical display options may not be simple due to the awkward menu translations, so here goes: in the main settings screen, you can choose the rotation of the screen and the orientation of the control inputs ("link rotation"), and once the game's running, enter the settings menu from the pause screen to set your zoom percentage and other display options.

What's this? The "9.5th" entry in ZUN's phenomenally popular shooting game series, Touhou Project, originally released on PC in 2005. Shoot the Bullet uses a very unconventional game system in which the player is tasked with defeating dozens of boss encounters not by shooting enemies but by photographing them the requisite number of times using a proximity-based camera; the camera can be manually zoomed around the screen at the expensive of shrinking the viewfinder, and photos can be used defensively in order to neutralize bullets, but the character can only take one photo at a time and must charge their camera to 100% between shots in order to take another.

Why should I care? From the very early days, the Touhou games were always designed with an inordinate amount of focus on creating aesthetically gripping bullet patterns; Shoot the Bullet allows the player to engross themselves in the minutiae of every attack in a manner that'd never be possible within a traditional arcade-style shooting game, and the Pokemon Snap-esque scoring criteria add a ton of depth and replayability to what might sound like a shallow or gimmicky affair.

Helpful tip: As with all Touhou Steam releases, Shoot the Bullet. remains entirely untranslated; you can find a translation patch and installer for this game and many others here.

To celebrate their 27th anniversary, CAVE has released a new, free version of their iOS port of DoDonPachi Blissful Death (Dai-Ou-Jou) — it's essentially the same as their existing and still-available paid version, including most of the same in-app purchases, but with ads upon every continue/game-over, which turns out to not be as annoying as it sounds.

LOOK AT THIS NEAT THING

This four-player online turret shooting game and would-be successor to Chu Chu Rocket was essentially completed by developer Dori Dock but shelved by Sega, with various theories as to why, including technical issues relating to the online mode and a general lack of interest from Sega of America, but whatever the case, it's not available for all to download and experience what might have been (and to perhaps understand why it never saw the light of day). 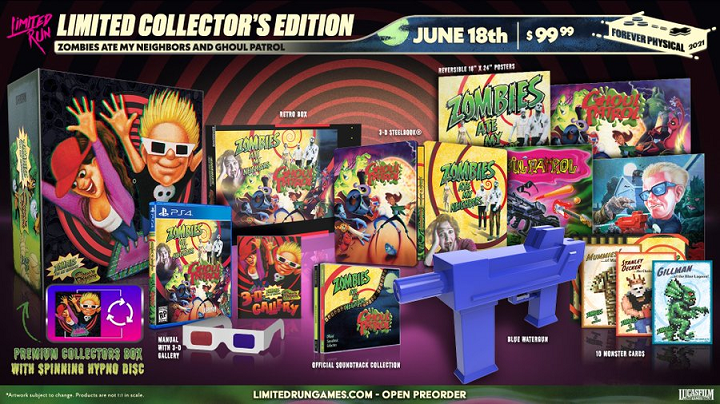 Limited Run's E3-adjacent media event saw the announcement of a ton of Retronauts-relevant reissues scheduled for the near- to medium-term future, with the most immediate being physical versions of Lucasarts' cult co-op action games Zombies Ate my Neighbors and Ghoul Patrol, both via the impending DotEmu-produced ports for PS4 and Switch and authentic cartridge runs for both SNES (both games) and Genesis (just Zombies). They've also had assistance from the Video Game History Foundation in sourcing the original promotional assets for these reprints, so they should look as crisp as possible.