It goes without saying that this week's big release is the Teenage Mutant Ninja Turtles Cowabunga Collection, a collection of Konami TMNT games that not only realizes one of the most demanded classic game collections in history but also helps cement the relentless ubiquity of '80s TMNT across all media, current series be damn. At least Rise got that movie, I suppose.

What's this? Namco's second direct followup to Pac-Man, originally released in Japanese arcades in mid-1983, with very sporadic reappearances across various Namco compilations, including the recent Pac-Man Museum+; following from Super Pac-Man, this game maintains the key-and-lock mechanic for collecting items (with the keys now replaced with cards that flip over, granting access to the item pictured on the card) and most notably adds the non-lethal enemy character Mil, who will beeline for unlocked items and attempt to dispose of them in the center box of each maze.

Why should I care? You want to witness one of gaming's first tsundere characters for yourself, I guess?

Useless fact: A version of Pac & Pal that replaced Mil with Pac-Man's dog from the US cartoon was produced for a North American release, but ultimately only released in Europe in extremely limited quantities; that version isn't present here, and said dog was also scrubbed from the recent Pac-Man World remake.

What's this? The third two-pack of ports from Nippon Ichi's not-Disgaea catalog, this time featuring the sing-song-y RPG Rhapsody: A Musical Adventure, originally released on PlayStation in 1998 and remade for DS a decade later, and the tactical RPG La Pucelle: Tactics, originally released on PlayStation 2 in 2002 and ported to the PlayStation Portable with extra content in 2009 as La Pucelle: Ragnarok, exclusively in Japan. La Pucelle's port is based on the PSP version and features additional localization for the formerly Japan-only content, as well as the incusion of content that was formerly only available as paid DLC, whereas Rhapsody looks to be an extremely direct port of the PS original.

Why should I care? As always, when it comes to NIS RPGs, you tell me.

Useless fact: I may very well be wrong, but Rhapsody's reissue has some of the telltale signs of being emulation-based, as opposed to being a direct port like NIS' other recent reissues; if true, that bodes well for the further commercial proliferation of PS emulation on non-Sony hardware, and if not... well, it wouldn't be the first time my wires were crossed.

What's this? A compilation containing almost Konami-published arcade, console and handheld video game based on the original '80-era Teenage Mutant Ninja Turtles; developed by Digital Eclipse, this collection presents every game with save states, rewind, various screen sizes, filters and borders, alongside button configs and accessibility features like invincibility toggles, as well as individualized game-specific enhancements like reduction of sprite flicker or automatic unlocking of hidden features/content. Additionally, this collection includes mockup strategy guides for every title, complete with demonstration videos for every tactic, full replays of every game that allow the player to take control at any point, a sound test for every game and a voluminous gallery of extra media that includes developer documents, boxes and promotional material, comic-related galleries, trailers for the various animated series and more, as well as online multiplayer with rollback netcode for select titles.

Which games are includes? The collection includes 13 games, with most also offering the Japanese version ROM: the original 1989 TMNT NES game and its two sequels, TMNT II: The Arcade Game and TMNT III: The Manhattan Project; the 1989 TMNT arcade game and its sequel, TMNT: Turtles in Time, the SNES Turtles in Time port and the Sega Mega Drive remix TMNT: The Hyperstone Heist; the three TMNT: Tournament Fighters games for SNES, Mega Drive and NES; and the three Game Boy games, subtitled Fall of the Foot Clan, Back from the Sewers and Radical Rescue. (Four of these games offer online play: the two arcade games, Hyperstone Heist and the SNES version of Turtles in Time.)

Why should I care? I cannot speak to the technical competency of this collection, online or offline — I have yet to try it for myself, and even modern-era Digital Eclipse isn't always blessed with the luxury of patching issues that ought to be patched, so I can't speak to what your day-one experience might be like — but I can say that both the massive quantity of bonus content and the presentation of the strategy content represent another high watermark, and just the mere fact that publishers are finally willing to facilitate the legwork to not only reissue but properly commemorate these massively popular and noteworthy licensed games is worth acknowledging in and of itself.

Useless fact: There is one '80s-era, Konami-published TMNT game not on this collection: TMNT: The Manhattan Missions, a DOS action-platformer by Canadian studio Distinctive Software that vaguely resembled Prince of Persia, minus interesting map design or, like, fun.

Square's non-Radical Dreamers Satellaview games have been consigned to the dustbins of history by fans and Square alike, but not with good reason: many of them were perfectly fine titles doomed to obscurity by their distribution method, and Koi wa Balance in particular might be the most curious of the lot — it's a multiplayer-centric and very silly "competitive gal game" made by a ton of important Square alum from the Chrono Trigger team, with music from SaGa's Kenji Ito, and it's now playable in English. (Two notes: one, the above footage doesn't use the patch, but rest assured, everything's translated; and two, you can play the game solo with CPU opponents if you'd prefer, or even just watch four CPU players duke it out.) 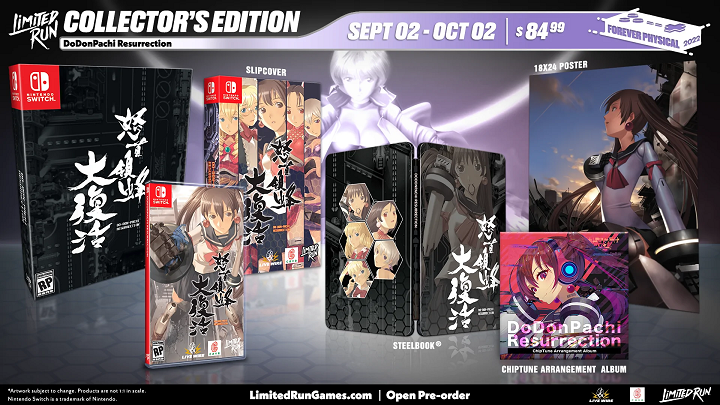 Live Wire's third and final (for now...) Switch port from Cave's illustrious catalog of arcade shooting games is being made available in physical form, with or without this arcade cabinet-style vertical Switch stand. (Note the chiptune arrangement album: to my knowledge, this is a brand-new arrangement for this release that isn't currently present in the game itself but will be added at a later date as paid DLC.) 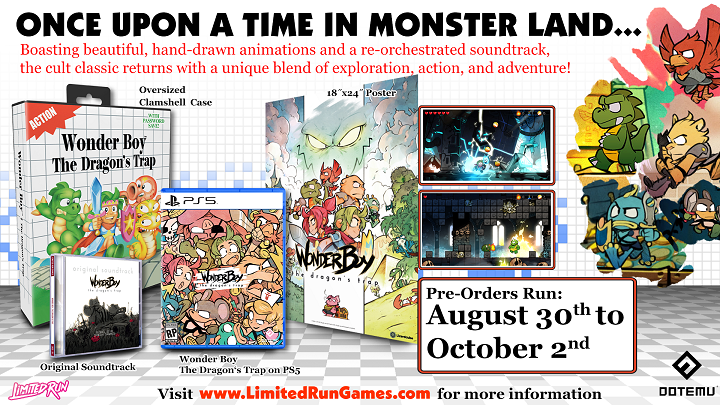 Lizardcube's superb remaster of Westone's classic Master System action/adventure game is getting yet another run of physical versions, should you require one more. That white grid never gets old, does it?