No, that's not a typo on either count: "worves" is a reference to an infamous typo on the back cover to the Neo Geo Garou package, and "Khushnood Butt" is really that dude's name—SNK's English branch changed that character's name to Khushnood Butt from Marco Rodriguez, for reasons mere mortals dare not ponder.

Garou: Mark of the Wolves

What's this? SNK's soft reboot of the Fatal Fury series, originally released for the Neo Geo in late 1999; set ten years after the death of longtime villain Geese Howard, this game saw a near-total roster and plot refresh (save for fan favourite Terry Bogard, now sporting a dad-approved bomber jacket) and a shift towards a more contemporary aesthetic, as well as the abolition of the traditional line-switching system in favor of a standard 2D plane and the new "Just Defend" system that rewards players for blocking attacks at the latest possible moment.

Why should I care? While Garou isn't necessarily the most competitve SNK fighter nor the game most emblematic of the Fatal Fury series, it's definitely the most approachable title in SNK's vast library of Neo Geo fighting games: it's fast, easy to learn and packed with astounding pixel-art animation that exceeds the limits of what was thought possible with then-ancient hardware. (That said, the online-equipped Code Mystics port for PS4 is the version to get, and probably a version you already own.)

Twist of the knife: SNK has made several failed attempts at a Garou sequel, all of which were aborted due to extenuating circumstances relating to the financial health of the company; current SNK producer and long-time Fatal Fury dev Yasuyuki Oda recently revealed a character spec sheet for a Neo Geo Garou sequel that he alledged was around 70% complete before cancellation, which you can see towards the bottom of this article.

What's this? The seventh Fatal Fury game for Neo Geo hardware and the last to feature the original cast, released in 1998; this game serves as a barely-canonical epilogue to the events of previous games with an all-star cast and a couple new characters — the snooty Li Xiangfei and the charismatic native American boxer Rick Strowd — thrown in for good measure. (Hamster insists it'll be out today and I have no choice but to take them at their word.)

Why should I care? Real Bout Fatal Fury 2 was made almost entirely with existing assets in the space of just four months; subsequently, most of the developers' focus went into revamping the core systems, making this one of the most balanced and immediately accessible entries in the series. If you're looking for character interactions and plot, look elsewhere, but if you want to sink your time into just one Fatal Fury game, make it this one. (Sorry-not-sorry, Garou.)

Useless fact: Kim Kaphwan's teammate/hostage from the King of Fighters series, Choi, makes a blink-and-you'll-miss it cameo: if you perform Kim's super in Kim/Tung Fu Rue's stage, Choi will appear ever so briefly at the top left or right of the screen, above the health bars.

What's this? A three-player overhead run-and-gun shooting game set inside a deadly Running Man-esque game show, developed and published in arcades by Data East in 1992; in addition to conventional Commando / Heavy Barrel-style shooting action, players can also blast downed enemies to send them careening into pinball-style bumpers and ramps for big cash prizes. (For all you Flip Grippers out there, know that Johnny Turbo threw in proper vertical mode support.)

Why should I care? Nitro Ball's a much gentler game than many of its contemporaries, and the pinball elements, along with Data East's signature over-the-top weirdness, add some lasting appeal to what could very easily have been a very run-of-the-mill arcade game.

What's this? A touched-up remake of Interplay's classic dungeon-crawling RPG trilogy, now featuring redrawn high-definition art based on the Amiga versions and new player-friendly features like an automapping system, a mouse-friendly UI and full party transfer across all three games. (The trilogy currently only includes the first games; the other games, as well as old-school legacy modes and other content, are due later as free updates.)

Why should I care? You're looking for a convenient way to experience a 30-year-old game and you're fully aware that they may not have remade every aspect of the experience to the extent that you might have wished they would.

Useless fact: This trilogy remaster was initially proposed by veteran programmer Rebecca Heineman during the crowdfunding campaign for inXile's upcoming Bard's Tale IV but little progress looked to have been made in the years since it was announced, so the fact that inXile was both able to restart with a new developer at the end of last year and produce something so quickly caught most fans by surprise.

Lizardcube's masterful HD revamp of Wonder Boy III re-established the game as a cult classic to a new generation of players, so it's no surprise to see there's a demand for a vinyl version of the soundtrack. Fangamer's release contains 40 tracks across 2 LPs printed in gold splatter, with original gatefold art by The Dragon's Trap artist Ben Fiquet and FLAC/320kb MP3 downloads delivered upon purchase.

Just in case you somehow missed the existence of these games, select ACA Neogeo titles are available for cheap on Xbox One for the next few days, as well as several backwards-compatible X360 titles including non-Neogeo titles like Neogeo Battle Coliseum and the KOF-themed shooting game King of Fighters Sky Stage. (Somewhat confusingly, they're also discounting the X360 version of Garou on the same day they decided to release the ACA version—do you prefer a cheaper price and awful netcode, or are you willing to pay a little more to ensure you're not stuck with a gross pixel filter?)

...and in case you're looking for the really deep cuts, SNK's Japanese PSN catalog is also on sale and features a multitude of Japan-only PS classics including some little-played Fatal Fury spinoffs ((Garou Densetsu: Wild Ambition, Real Bout Garou Densetsu Special: Dominated Mind), a pair of Japanese-dependent RPGs (King of Fighters Kyo, Athena -Awakening from the Ordinary Life-) and the only KOF game thus far to feature a guest character from a non-SNK franchise (King of Fighters Maximum Impact Regulation "A", featuring Mizoguchi from Data East's Fighters History Dynamite/Karnov's Revenge). 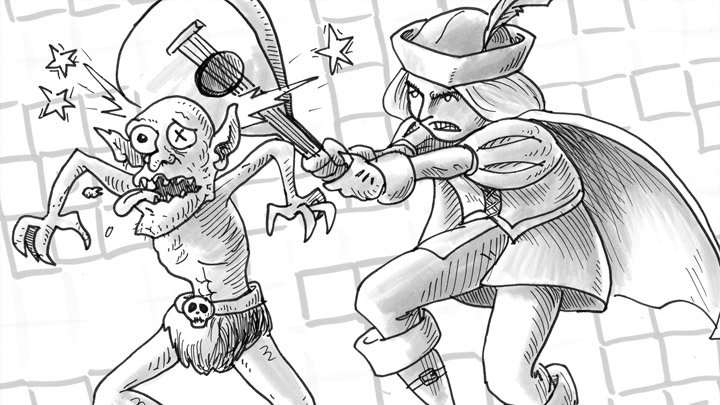 The history of The Bard's Tale arrives in podcast form