We knew it was coming, dear readers, but I don't think anyone expected it this soon: NEOGEO Pocket Color Selection Vol.1, the first-ever collection of Neo Geo Pocket Color games and one that features a few sought-after first-time reissues, including Metal Slug 1st & 2nd Mission. Of course, the title of said collection poses a very obvious question: what might be in store for a Vol.2? SNK vs. Capcom: Card Fighters Clash? Sonic the Hedgehog Pocket Adventure? Puyo Puyo Switch Game $8-and-a-half? 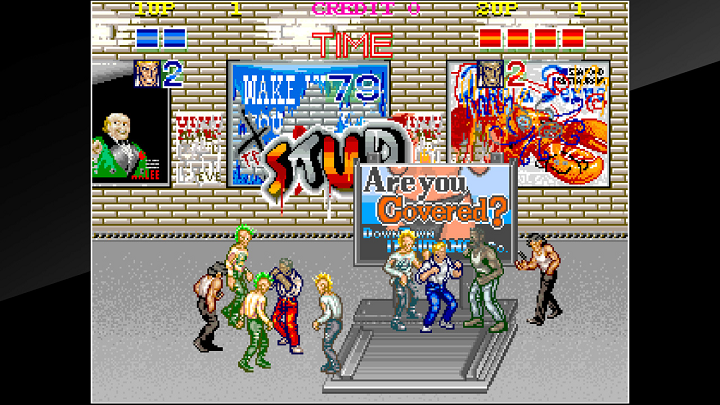 What's this? Konami's answer to Double Dragon, originally released in arcades in 1989 and never ported until now; one or more players take control of renegade cops out to rescue kidnapped women from a ganglord, with a few novel-for-the-time features like specific attacks against downed enemies and the ability to wield a handgun. (The game was broadly released as a two-player game meant for the Japanese market and a four-player game conceived as a Gauntlet cabinet conversion for the overseas market, and the Arcade Archives release offers both versions.)

Why should I care? While it may not look like much compared to their more well-known licensed brawlers or even the contemporaneous Final Fight, Konami's particular brand of belt-scroll action was firmly cemented with this game, for better and worse... and you're probably not going to get any of those licensed games you want, anyhow.

Helpful tip: The most notable change to the 4-player version of Crime Fighters was the Gauntlet-esque numerical, constantly-draining health gauge, but there are other punitive changes like the gun being limited to a certain number of shots and the removal of the reverse kick due to a reduction in buttons, and the game was retuned to be more difficult in general, so if you intend to play solo, you'll probably want to do so using the 2-player version.

What's this? A menu-based detective adventure game, developed by Genki and And-Joy and originally released for Japanese feature phones in 2002, spawning a long-running series for phones, web and a single DS game; the player-character, a video game writer who occasionally assists at a detective agency in order to gain inspiration for their work, is dragged into a murder case concerning an online RPG that is said to kill those who play it.

Why should I care? As with many of these G-MODE Archives releases, I know of it only by reputation, but the announcement of this reissue got a big response online and I know the original author was poached by Square-Enix at some point, so I can only presume that those of you who can read it will be sufficiently entertained.

"G-MODE Archives+"? Yep, they have a new "+" sub-label dedicated specifically to reissuing feature phone games from outside of the G-MODE catalog, and this is the first one.

What's this? A compilation of ten emulated Neo Geo Pocket Color games, developed by long-time SNK partner Code Mystics; these games are equipped with local versus multiplayer where relevant and are enhanced with some basic screen options, button mapping, save states, a variety of Neo Geo Pocket-themed screen borders and a rewind feature, as well as 3D models of the original boxes and cartridges and scans of the original game manuals. (There is a physical release planned, but it's digital-only for the moment.)

Which games are included? This collection includes the six games that were previously released individually on the eShop — SNK vs. Capcom: Match of the Millennium, SNK Gals Fighters, King of Fighters R-2, Samurai Shodown! 2, Fatal Fury: First Contact and The Last Blade: Beyond the Destiny — as well as four additional games: Metal Slug 1st Mission, Metal Slug 2nd Mission, Dark Arms: Beast Buster and Big Tournament Golf (aka Neo Turf Masters); these games default to color, but compatible games can also be played in greyscale, should you so desire. (Link features beyond versus play are not supported.)

Why should I care? The presentation aspects of the collection leave much to be desired — they've essentially just lumped a bunch of games together, save for the oddly detailed package modes — but the games themselves look, play and sound as they should, and the game selection represents the cream of the crop of SNK's own Neo Geo Pocket Color output (with a couple of license-dependent exceptions that one can assume will form the centerpiece of a vol.2).

Helpful tip: For whatever reason, this emulator doesn't offer an integer scaling option, but you can manually correct this using the right stick, as unnecessarily finicky a process as it may be.

What's this? A 4K-compliant remaster of Mommy Makes Games' gleefully tasteless tribute to the 16-bit side-view mecha action games of yore, originally released on Xbox 360's Xbox Live Indie Games in 2010 and ported to PC in 2015; this version features a major rebalancing of the core game and the addition of a multitude of new stages, new enemies and online leaderboards.

Why should I care? You'd like a glimpse at how a late-'90s PC magazine cover disc homage to the likes of Metal Warriors and Cybernator might have looked and felt (and I don't mean that in the backhanded way I typically intend for these comments to be taken).

Helpful tip: Explosionade DX's additional features and content will be added to the existing PC version in due time, but they're not out today.

Stubbs the Zombie in Rebel Without a Pulse

What's this? A port of Wideload's tongue-in-cheek zombie-horde action game, originally released for Xbox, PC and Mac in 2005 and famously built upon the engine that powered Halo: Combat Evolved. Reissues and previous versions of this game have been repeatedly delisted due to the game's insurmountable technical issues, and this version's primary enhancement is simply the promise of stable and reliable performance, with other minor tweaks like more modern control options.

Why should I care? I have forgotten everything I ever knew about Stubbs the Zombie, save for the contemporary-musicians-cover-'50s-rock-songs bent of the soundtrack, so you tell me. (A quick glance at the early reception to this port suggests it's currently very crash-prone, so proceed with caution.)

Helpful tip: There's a physical collectors' edition for the Xbox One version of Stubbs available direct from the publisher. 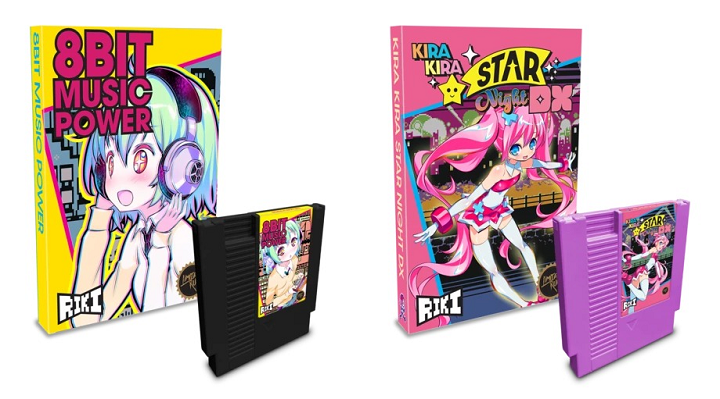 Prodigious Famicom homebrew dev RIKI's interactive chiptune-on-a-cart releases have amassed a cult following for their impressive demoscene-style aesthetic and star-studded line up of guest composers, and now Limited Run Games is liberating them from the inadequacies of their previous Famicom cartridge runs with an all-new set of higher-quality NES-tailored cartridges; the collectors' editions of each cartridge include a translated commentary book and a music/data CD. Ya did good, Jeremy. (For the uninitiated Kira Kira Star Night DX most closely resembles something one might genuinely play, but the other two cartridges really are essentially just soundtracks with window dressing.) 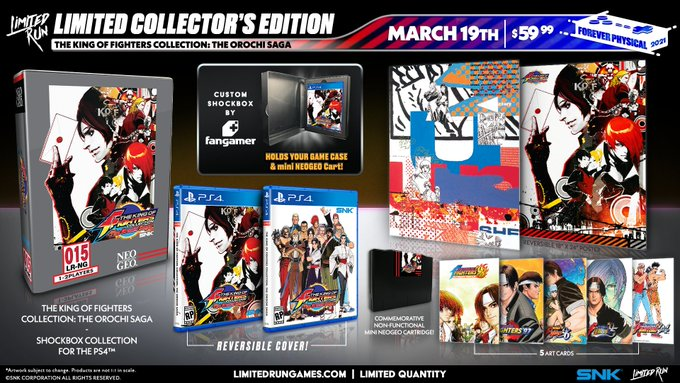 I was sure they'd run of out PS2 Classics to slap on PS4 discs by now. I was wrong.