I elected not to include a certain Japanese release in today's roundup, dear readers, due to the fact that it's been long announced for international release, but for the impatient among us, you can grab Wonder Boy: Asha in Monster World, the polygonal remake of the Japan-only Monster World swansong Monster World IV, from the Japanese Switch and PS4 stores and play it in English right now, if you so desire... but, if you want the bonus Monster World IV reissue, you might as well wait for the international release, as it's only included with physical copies and Japan's not getting a physical PS4 version.

What's this? A perspective-shifting military-themed shooting game, developed by Konami and released in arcades in 1987, with a sole contemporary port produced for Sharp X68000 and more recent issues both as a standalone PS4 title and as a part of Konami's Arcade Anniversary collection; players alternate between controlling the "Tom Tiger" attack chopper through overhead, vertically-scrolling stages and piloting the "Jerry Mouse" fighter jet through fast-paced faux-3D stages from a behind-the-jet perspective. (The overseas version, Typhoon, has a slightly altered stage order, as well as an alternate title due to overlap with the detergent brand of the same name.)

Why should I care? The pseudo-3D stages' scaling and rotation effects aren't half-bad for a 1987 game, and the vertical stages are balanced as such that you won't have to work particularly hard to see them all (barring a couple of difficulty spikes during certain boss fights). This is also the game that kicked off Konami's late-'80s/early-'90s penchant for unapologetic overuse of the orchestra hit sample, if that's something you have a fondness for.

Useless fact: A-JAX feels like two games in one because that's quite literally what it is: the vertical and pseudo-3D stages were both originally from separate game projects that weren't making adequate progress, and so it was decided to merge the two into one game. Test cabinets used a high-end "taikan" cabinet with a fancy control stick and high-end audio, but the game eventually released in a standardized cabinet as those elaborate controls made the 2D sections much harder to play.

What's this? A "version update" of Square-Enix and Cavia's bleak, format-bending action-RPG successor to Drakengard and prequel to Nier Automata, originally released in 2010 in two slightly different forms in Japan as Nier Replicant and Nier Gestalt for the PS3 and Xbox 360, respectively, with the Gestalt version released internationally, simply as Nier; developed by Cavia successor ToyLogic, this version adds new high-detail models for the primary characters, a newly-arranged soundtrack with new tracks by original composer Keiichi Okabe, full voice acting with additional and re-recorded performances, a revised combat system supervised by Nier Automata director Takashi Taura of PlatinumGames and new quests and narrative content alongside the restoration of content cut from the original game, as well as frivolous and not-so-frivolous bonus content for Automata fans. Put simply, it's about a boy trying to help his sick sister in the only way he knows how.

Why should I care? You're one of the many people who've just discovered Yoko Taro's signature brand of cartoonish misanthropy with Nier Automata and you'd like to see many of those same narrative conceits in their nascent form, or experience just how necessary Platinum's involvement was to get the average player to see them through.

Helpful tip: The primary difference between the Gestalt and Replicant versions of Nier was the protagonist: the Gestalt version replaced the teenaged protagonist with a middle-aged man, changing the primary character relationship from that of brother/sister to father/daughter to questionable effect; thusly, Replicant can be seen as the canonical or "correct" version, but "Father Nier" does make an appearance in this new version, as the player-character for the "World of Recycled Vessel" challenge dungeon, originally available as post-launch DLC and now included as part of the base package.

What's this? Shantae's original 8-bit outing, originally released at the very tail end of the Game Boy Color's life in 2002 in extremely limited quantities, with a long-awaited digital reissue on 3DS' Virtual Console in 201x and a recent cartridge reissue via Limited Run Games; this Switch reissue offers a save state option, some basic screen filters and a small art gallery, in addition to the ability to play the game with the altered color palette and smattering of extra content that was originally only accessibly by playing on Game Boy Advance hardware

Why should I care? Shantae represented a rare oasis in a desert of mediocre throwaway Game Boy games: it was earnest, content-packed, technically ambitious, audiovisually accomplished and aimed squarely at connoisseurs of the 8-bit action-adventure games of yore; nowadays, its cramped viewing area and clunky map design are much harder to stomach, and this very basic re-release seems like a missed opportunity to apply some very simple fixes to some of the game's more immediate issues, but it's nice to have the entire series available in one place.

Helpful tip: The emulation suite for this reissue was produced by Limited Run Games themselves and it's undoubtedly the first of many digital reissues one should expect using this software, so if you have any requests or criticisms, you'd best forward them to LRG. 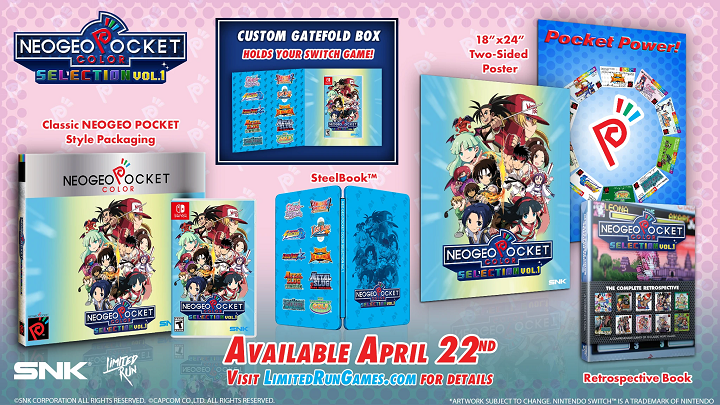 To the surprise of few, Code Mystics' well-received collection of ten beloved Neo Geo Pocket Color games is getting a physical release from regular SNK cohorts Limited Run Games and Pix'n Love in North America and Europe, respectively, with a particularly noteworthy perk of the LRG version being a retrospective penned by Jeremy Parish and Diamond Feit, who some of you might recognize as prominent members of the Heiankyo Alien awareness network Retronauts. (It's also available right this second, which puts it a little ahead of LRG's usual release schedule.) Alternately, Pix'n Love is offering separate super-deluxe SNK- and Capcom-themed deluxe packages for the big spenders. 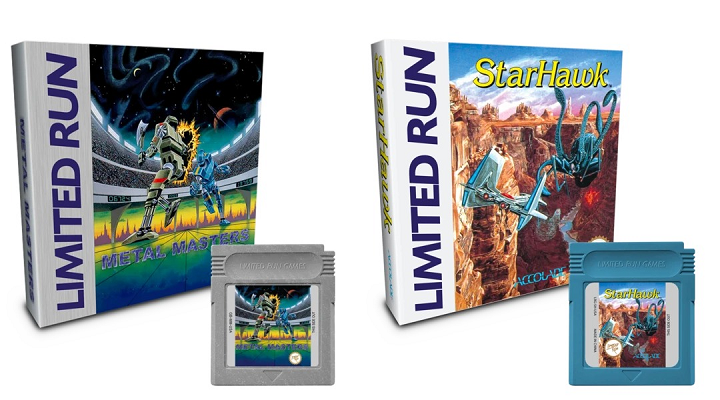 Alberto Jose Gonzales went hard on the Metal Masters soundtrack, I'll give him that. 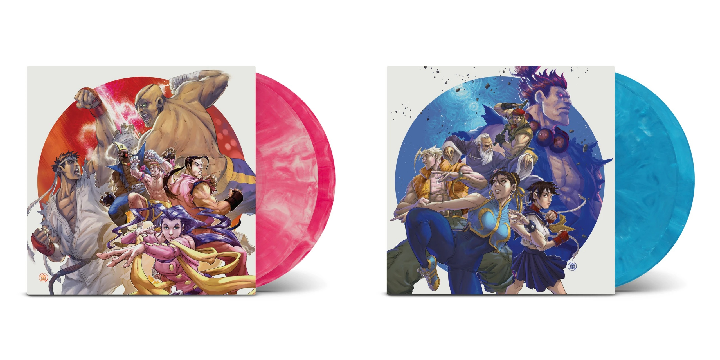