Yes, WinBack is the appropriate game for this week's thumbnail. No, I am not interested in justifying this incredibly sound position. 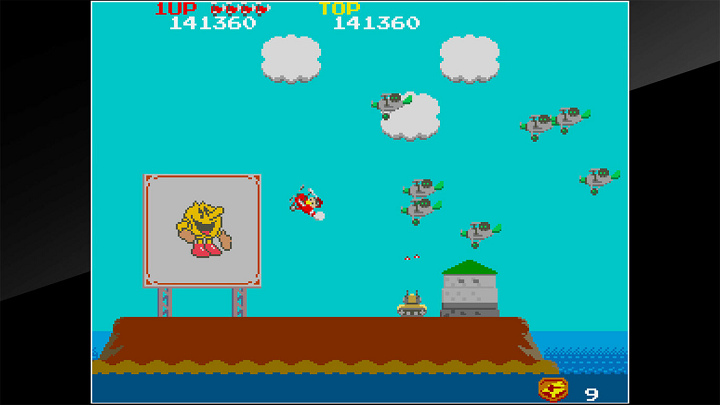 What's this? A horizontally-scrolling shooting game with a very cartoony WWI-era theme, originally developed and distributed in arcades by Namco in 1986 and ported for contemporary platforms including NES, Game Boy and Epoch Cassette Vision; one or two anthropomorphic bird dudes are tasked with bombing specific targets in each stage, which necessitates collecting a bomb, navigating treacherous terrain and shooting and/or dodging enemies via a machine gun shot and loop-de-loop button.

Why should I care? You're intrigued by the notion of a shooting game that scrolls to the left instead of the right, and you're not willing to wait for the unambiguously superior DX revision that's bound to appear on Arcade Archives in the near future.

Namco Museum watch: Yep, it's on there, and the NES version's on the first Namco Museum Archives, too.

What's this? The newest paid tier of Nintendo's online subscription service, which grants access to a periodically-updated library of emulated Nintendo 64 and Sega Genesis games. N64 games are augmented with online multiplayer (using delay-based code, ie wildly variable quality), Rumble Pak emulation, save states and the ability to choose between NTSC and PAL versions of certain games, whereas Genesis games offer an identical feature set to the existing SNES app: a few different display options, save states, a rewind feature and online multiplayer (allegedly using rollback-based netcode, ie a more reliable option, particularly for those with slower/less consistent connections). Nintendo's also selling dedicated N64 and Genesis replica controllers from their website, but good luck getting one at this point. (Once again, the six-button Mega Drive controller is exclusive to Japan, while the rest of the world is being stuck with the three-button pad.)

Which games are included? The Nintendo 64 portion of the library has launched with Super Mario 64, Mario Kart 64, Mario Tennis, Dr. Mario 64, The Legend of Zelda: Ocarina of Time, Star Fox 64/Lylat Wars, Yoshi's Story, Sin & Punishment and, because you demanded it, WinBack, while the Genesis side includes Sonic the Hedgehog 2, Streets of Rage 2, Gunstar Heroes, Shinobi III, Phantasy Star IV, Shining Force, Ristar, Golden Axe, Dr. Robotnik's Mean Bean Machine, Ecco the Dolphin, Strider, Contra: Hard Corps, Castlevania Bloodlines and, for the first time outside Japan in well over a decade, M.U.S.H.A. (As with the NES and SNES apps, you can use a Japanese account to download the Japanese version of each app and access that unique library, but at the moment it's almost identical: the Japanese Mega Drive app has Puyo Puyo instead of Mean Bean Machine, and the Japanese N64 app actually offers fewer games, as they weren't given a substitute for the overseas-only Dr. Mario 64.)

Why should I care? Whether or not you intend to pay the upcharge, you should care that a ton of classic games are once again being made available to a wide and in many cases brand-new audience, and you really ought to care about the fact that Nintendo's handling of their N64 catalog seems to be getting worse with time: more graphical glitches and other visual inaccuracies, more input lag, chronic lack of support for features like the Controller Pak and some very bizarre button mappings that cannot be changed. Genesis seems fine, at least. SEGA DOES

Helpful tip: Several N64 games have already been confirmed for future updates, including The Legend of Zelda: Majora’s Mask, Pokemon Snap, Kirby 64: The Crystal Shards, Mario Golf, Paper Mario, F-Zero X and Banjo-Kazooie. (Japan will be getting Custom Robo and Custom Robo V2 at some point, too.)

What's this? The debut release in a line of collections of the defunct arcade developer Toaplan, developed and self-published by emulation artisans M2 as a branch of their ShotTriggers label; this collection centers around Toaplan's Taito/Romstar-published vertically-scrolling helicopter shooter Tiger Heli and its 1987 sequel, Kyukyoku Tiger/Twin Cobra and features M2's typical assortment of very granular custom settings, new "super easy" modes, extensive practice modes, on-screen gadgets and online leaderboards... and, if you shell out for the complete package, a whole lot more besides. (The first-print physical version includes a book containing interviews with the original developers and various associates, strategy guides, etc.)

Which games are included? The base digital version includes the arcade version of Tiger Heli, the arcade version of Kyukyoku Tiger in both standard 1P and the extremely rare 2P variant, and the arranged overseas version Twin Cobra, plus, for no particular reason, the falling-block puzzle game Teki Paki, which installs as a separate game and may require you to manually enter a redemption code depending on platform. The DLC expansion, included with the physical version as standard, adds the Famicom and NES versions of Tiger Heli, the Famicom, Japanese Mega Drive and PC Engine versions of Kyukyoku Tiger, the NES and Genesis versions of Twin Cobra and, again, for no particular reason, the side-view arcade action game Get Star and its overseas variant, Guardian.

Why should I care? Of all the ShotTriggers releases so far, this is going to strike many as the hardest to swallow — these games certainly feel so much older than the Cave and Raizing issues that precede them, and the abundance of console ports might not hold much appeal for the average player — but Kyukyoku Tiger/Twin Cobra in particular is a formative classic that retains its meat-and-potatoes appeal, so if you ever wanted to attain complete mastery over this specific game, this release will give you the tools to do it. (It should be noted that only the arcade versions of Tiger Heli and Kyukyoku Tiger feature the full suite of M2STG enhancements; the console ports and even the other arcade games are more limited in terms of feature set.)

What's this? An emulated two-pack containing KAZe/Live Planning's notoriously Famicom disembodied-tengu-head shooting game Abarenbo Tengu and its zombie-fied NES counterpart, Zombie Nation; these versions add extra gadget-style data displays to the screen borders and can be played in an authentic, as-is mode with achievements or a more casual-friendly mode that feature save states and rewind, with an additional art/manual gallery and new menu illustrations and music provided by the original developers. (The pretty-much-sold-out physical versions include, among other things, a soundtrack CD with new NES-style music and arrangements by original composer Norio Nakagata and an interview book with several of the original developers including illustrator Satoshi Okano, and the Japanese version also includes a download code for a playable prototype version of Abarenbo Tengu that will be accessible in a week or so.)

Why should I care? These games were among the more technically and artistically-accomplished games in their respective libraries, and this collection ensures that you'll not only be able to enjoy their approximation of a rampaging kaiju simulator but also mitigate some of the more unwieldy elements in order to see it all the way to the end.

Useless fact: Zombie Nation was not a mere sprite edit to make the game more palatable in the west but the truest expression of the developers' original intent: the Famicom game was originally designed with a severed head as the player-character but when Nintendo gave the developers the no-go, they switched it for a tengu head in reference to Nintendo's famous brand of hanafuda cards. What better model for a rampaging, unstoppable beast than Nintendo, eh?

What's this? The markedly more cutesy Super Famicom follow-up to Success' cult arcade witchy shooting game Cotton: Fantastic Night Dreams, originally published by Datam Polystar in 1994; this Ratalaika-emulated reissue adds the option to play with rewinds, save states and the original cheat codes and also offers a button config and detailed display and shader options, but not much else.

Why should I care? Of all this classic Cotton games that followed the original, this is the one that adheres most closely to the original, to the point where it's less a sequel and more a heavily-arranged reskin, but it's a decent enough place to start, and it's by far the easiest entry in the classic series.

What's this? A compilation game consisting of remakes of select content from the first decade or so of the Mario Party series: five boards from the Nintendo 64 trilogy, 100 minigames spanning both the N64 and Gamecube entries, a wealth of convenient options for customizing games (including reducing minigame selections to certain eras, setting the specific types of bonus stars and, eventually, unlocking classic N64 music for each board) and, for the first time ever, full online play across all modes.

Why should I care? Putting aside the obvious nostalgia factor and the notion that, since they're picking from existing minigames, they could have simply elected to only pick good ones and not bad ones, this is a game that's been configured for simple movement-plus-two-buttons inputs, making it the most immediately accessible mainline Mario Party in a minute... plus, y'know, online. (I strongly suspect very few people will ever finish an online game, but what do I know.

Helpful tip: In resurrecting so many classic minigames, they made the decision to bring back a couple of the really early games that required intense spinning of the analog stick; I can only presume they've drastically toned down the amount of spinning required, and it's not as if the joycon's circle pad is going to shred palms like the N64 stick did in its day, but even so, that's certainly a bold choice and one I think people ought to be aware of.

What's this? Yet another Cotton game, this one a genuine faux-3D sequel to the original arcade game, originally developed by Success and published by Sunsoft for the Sega Mega Drive in 1994, exclusively in Japan; once again, Ratalaika's handling emulation duties, with save states, rewind, button config and detailed display/shader settings on offer

Why should I care? Panorama Cotton is a game that really bit off more than it could chew when it came to bringing the Space Harrier experience to the humble Mega Drive, and this reissue doesn't seem to do much of anything to allow it to transcend the confines of its original target hardware, but at least this option won't set you back several hundred bucks.

Helpful tip: This reissue does add one game-specific toggle: the auto-fire on the standard shot will overheat after a few seconds of holding the button down, but you can now disable the overheat mechanic, which does a surprising amount to mitigate the game's difficulty, at least initially.

QUByte Classics series to launch with The Immortal 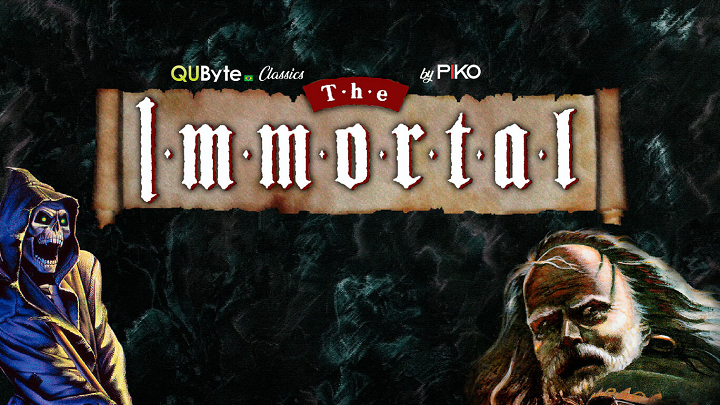 Several months ago, Brazilian publisher/developer QUByte Interactive announced their plans to launch a console-centric reissue series focused around the catalog of omnivorous IP guzzler Piko Interactive, and it seems that series is posed to kick off this week with a double-pack containing the NES and Genesis versions of the isometric action-RPG The Immortal — from the looks of things, they planned to drop these games alongside a press event scheduled for today, but timezone shenanigans meant they already went up for sale in Japan, so... try to act surprised, maybe?

The Sega Channel is back, sort of! Hacker BillyTime! has found a way to cram a bunch of ROMs into the old Sega Channel front-end, which should ultimately allow people to create their own custom multi-game collections with an authentic Sega Channel veneer. (Don't worry, nobody's forcing you to include Zoop.) 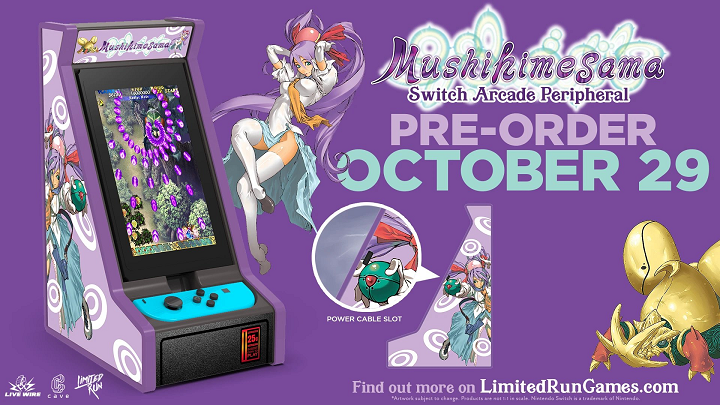 Live Wire's surprise run of X30-to-Switch Cave shooter ports is now going physical, with Limited Run Games offering physical versions of the popular insect-themed bullet hell game Mushihimesama in both standard and collectors editions, as well as a mini arcade cabinet, which... okay, it's cute and all, and maybe I'm missing something, but I can't see how playing with a sideways joycon like that could possibly be fun.