Given the immediate, astounding success of this bundle, I suspect it requires no further introduction, but it never hurts to be thorough: itch.io's Bundle for Ukraine is offering close to one thousand games for a minimum donation of $10, which will be split between the International Medical Corps and the Voices of Children charities, so don't hesitate to contribute. 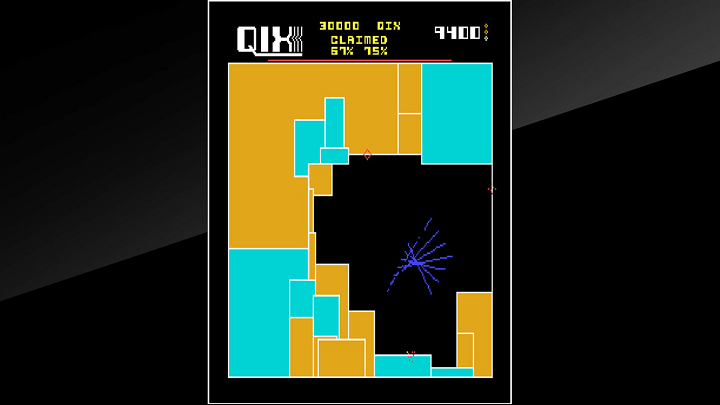 What's this? A classic, oft-imitated action-puzzle game, originally developed by Taito America and distributed globally by Taito in 1981, with a multitude of subsequent home conversions and sequels including a Mario-adorned adaptation for Game Boy; using a diamond-shaped cursor, the player is tasked with drawing lines to cordon off sections of the play field until 75% or more has been sealed, dodging obstacles like the eponymous QIX (pronounced "kicks", by the way) all the while.

Why should I care? You want to experience the pure, untouched version of this familiar game system as it existed before being defouled by a hundred other games of varying degrees of horniness.

Helpful tip: The upcoming Taito Milestones collection for Switch, due out internationally next month, includes QIX alongside nine other games, so you may want to wait for the value pack if you're a Taito fanatic.

What's this? The first truly 3D entry in Nintendo's long-dormant F-ZERO series of ultra-fast racing games, originally released for the Nintendo 64 in 1998 and reissued for both Wii and Wii U via the Virtual Console service; aside from the obvious changes inherent to the addition of three-dimensionality, F-ZERO X builds on the original with thirty-character races and an additional focus on aggressively attacking opponents, as well as supplementary features like a random track generator and four-player split-screen multiplayer (playable online via NSO, of course).

Why should I care? Getting the N64's premier racing game on Switch, and with online play to boot, should be cause for celebration... but, Nintendo's emulation of this game on Wii U was so immediately terrible, with poorly-calibrated analog movement that made fine movements impossible, that I'm extremely hesitant to recommend this version sight unseen. Nintendo has been regularly patching the NSO N64 emulator, so that's something, I suppose.

Helpful tip: F-ZERO X was perhaps the most famous beneficiary of the Japan-only 64DD expansion peripheral for the N64, with the official expansion kit granting access to a fully-featured track editor, a vehicle editor, twelve new tracks and higher-quality music, but as with previous reissues, none of that content is accessible in this version.

What's this? A remastered collection of the .hack//G.U, series of faux-MMO action-RPGs based on the cross-media franchise of the same name, originally developed for CyberConnect2 and published in Japan and North America by Bandai-Namco across 2006 and 2007; these versions feature a framerate/resolution bump and higher-res textures, up-res'd cutscenes, a multitude of difficulty/progression tweaks including explicit cheat modes, the inclusion of rare limited-edition content and a smattering of brand-new content to experience.

Why should I care? I'm going to level with you: I still don't know what .hack actually is.

Useless fact: This specific collection was released on PS4 and PC years ago, with a Switch version explicitly ruled out due to disinterest and skepticism on the part of the publisher that may or may not have been influenced by their relationship with Sony, but years of begging seemed to have forced their hand.

What's this? A Switch port of the recent fan-made remake of the famous Doom-powered cereal advergame, now running on UE4 and focused primarily on deathmatch.

Why should I care? I mean, if you just want to reaffirm how much of the appeal of Chex Quest is just the classic Doom engine, be my guest, but you can do so on PC for nothin' (and that's about all it's worth).

Useless fact: This remaster is not only licensed by General Mills, producer of Chex Mix cereal, but is also part of an official cross-promotional gimmick whereby codes on specially-marked cereal boxes can be used to unlock in-game content (on PC, anyhow).

OH LORD, DID THEY ACTUALLY FIX IT?

...short answer, no — many of the visual blemishes, audio inaccuracies and general ugliness persist, but they have added proper full-screen widescreen support, a 1.5x speed increase for auto-battles, more responsive controls and other quality-of-life features, so perhaps it'll cross the threshold of tolerability by the time the Chrono Cross remaster is upon us.

John Romero's response to any and all events in his life is to make Doom WADS, but his response to the current crisis in Ukraine required a slightly different tack: he made a Doom 2 WAD, with every purchase going directly to the Red Cross and the UN Central Emergency Response Fund. Buy the map, help the world, have fun.