An unfinished Atari 2600 series finds a conclusion... in comic form?

An incomplete Atari 2600 series is finally reaching its end in the Year of Our Lord 2017. In the form of a comic book. Stranger things have certainly happened in the world of licensing… but not by much.

Episodic game franchises go unfinished more often than not. (Ask Gabe Newell about Half Life 2: Episode 3 sometime, he loves that question.) It's a grim reality of the business, and it's one whose precedent was set more than three decades ago, way back on the Atari 2600.

In 1982, Atari published a game called Earthworld, which served as the embarkation point for a tetralogy called SwordQuest. It was a madly ambitious concept of a series: A set of top-down action-RPGs featuring a variety of mini-games and challenges, reminiscent in some ways of the Tron arcade game. And upon completing the games and gathering all the clues hidden within, players could submit their solution to Atari to compete for valuable prizes (including a solid gold talisman and a chalice made of gold, platinum, and precious stones).

The second game, Fireworld, shipped in 1983. You know what also happened for Atari 2600 in 1983? The whole bottom fell out of the console market, Atari's stocks crashed, and parent company Warner Communications split the company into two parts and sold them off like damaged goods. The third SwordQuest title, Waterworld (no relation), was only available through Club Atari. That game's prize was never distributed, and the fourth entry in the series — to be called Airworld, obviously — never shipped in any form.

And that should have been the end of the game's legacy, right then and there. It hasn't even done much as a cautionary tale against the folly of episodic games (but no doubt we'll be seeing SiN episodes two through nine any day now). Truly, a forgotten corner of gaming. But no: As it turns out, Dynamite Entertainment has picked up the rights to SwordQuest and will be launching it as an ongoing comic book series beginning in May. It's a strange property for anyone to pick up from the dusty annals of video game history, but it does make a certain kind of sense; the original games shipped with packed-in comics to lend context to the decidedly abstract on-screen action.

Plus, the initial pitch sounds intriguing. Rather than being a straight adaptation of the SwordQuest plot (which was remarkably expansive for 2600 games), the SwordQuest comic series will evidently take on more of a metatextual flavor by concerning itself with the adventures of a normal kid on a mission to complete the SwordQuest games. 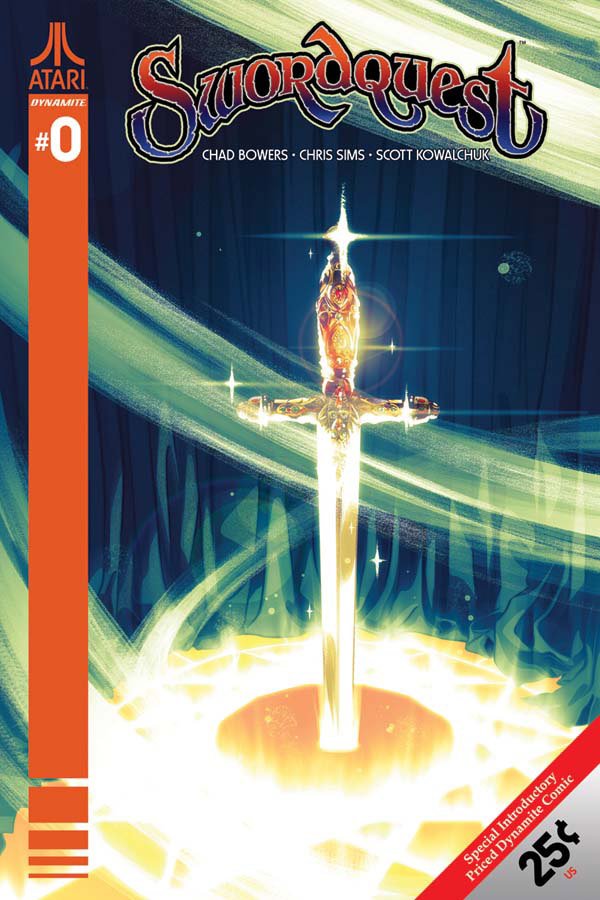 The creative team behind SwordQuest knows from metatext, too: Co-writer Chris Sims wrote Marvel's too-brief X-Men ’92 series, which managed to be amusingly (rather than annoyingly) self-referential, and artist Scott Kowalchuk did a stint on Batman ’66, which did a brilliant job of recapturing the same tongue-in-cheek straight-man vibe as the old TV series. So despite the improbability of this entire venture, it's probably going to turn out to be pretty good. At the very least, it seems likely to offer a more meaningful fictional takes on classic video games than a certain soon-to-be-a-major-Hollywood-picture novel…

As it happens, Sims is based here in North Carolina and has graciously consented to sit in for an episode of Retronauts East. You can look forward to that — along with the zero-issue debut of the comic — in a few months.