One of the most interesting things to emerge from Nintendo's complex multi-modal hardware design for the Switch is the fact that it's the first game system since Bandai's WonderSwan in 1999 to support a vertical screen orientation right out of the box. Yes, I know, pedants: The DS had "book" mode, but only one developer was insane enough to try and use that for an action game (Team Ninja with their ambitious but kinda disastrous Ninja Gaiden: Dragon Sword). With Switch, though, you can simply disconnect the Joycons from the core unit, place the core sideways on a stand, and play with a rotated screen — an arrangement that would require prodigious effort with other consoles.

This, of course, has its practical limitations. You can't easily use vertical mode when the Switch is docked, since the system feeds out to a television in that mode. This of course introduces the same issue involved with any other system, i.e. you don't really want to turn a 60" flatscreen television sideways unless you've had a pivoting mount installed at great expense specifically for that purpose. And it's not as though a lot of Switch games use vertical mode. But it's a great option for classic arcade games that originally shipped with vertical monitors, and as we all know, Switch is quickly becoming a favorite destination for publishers to stow their classic games and compilations.

Case in point: Yesterday Bandai Namco announced a new Namco Museum anthology specifically for Switch, due out this summer. While you'll find some of the usual suspects on this compilation, such as Pac-Man, it also contains some unexpected inclusions: Splatterhouse, for one, and the more or less forgotten arcade version of Rolling Thunder 2 (which I don't believe the company has ever included on any compilation to date). It also includes the option to use vertical — or tate, if you prefer — mode for the games that originally ran on vertical arcade monitors. Galaga, for one.

That's rad, but it does raise the issue that the system's vertical orientation only really makes sense when you set the core screen on a stand and use a detached controller. Games of the type packed in with Namco Museum seem like a natural fit to the system's default handheld mode, yet there's no way to treat the system as a handheld while using the screen in tate mode. So this is my earnest request to peripheral manufacturers: Please, dudes and ladies, someone out there needs to create a third-party Switch grip that will allow us to use the system in vertical mode while still holding it as a compact, self-contained handheld device. Some sort of snap-on cradle to enclose the screen and slide the Joycons into seems like a pretty simple and inexpensive thing to create; ideally the cradle would include wired connections to allow the Joycons to physically plug into the console, but it would also work just fine if it simply had a pair of rails to slide the Joycons into and let the controller dongles connect wirelessly, as Koizumi intended. 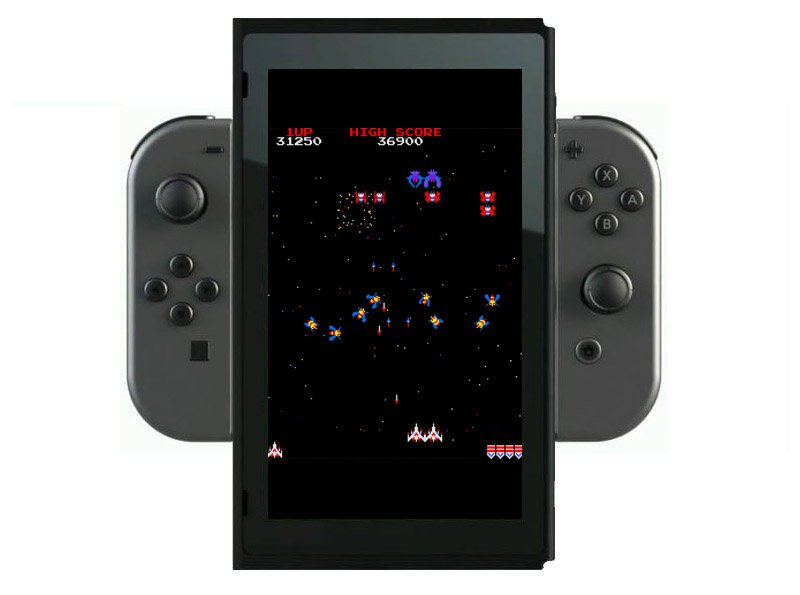 Can I get a "hell yeah" from the choir?

I doubt this peripheral would see a ton of use, but I also suspect we'll be seeing enough classics with tate mode support to make it worth many people's while. Heck, someone with more confidence in CAD software than I have could probably bang out of these out with a 3D printer in the space of an afternoon. So anyway: You, the peripheral makers of the universe, may have this idea for free. All I ask is that you send one along for a Retronauts review once you've created it.