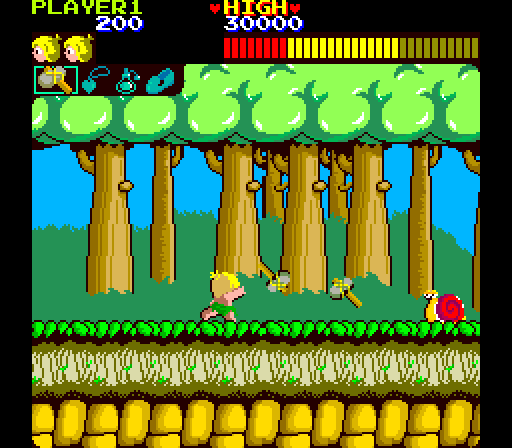 Released in 1986, Westone's Wonder Boy might be the quintessential arcade platformer. Even a casual observer would note its breezy sensibility, its single path forward, its sense of forward momentum—its "arcade feel." But what all these boil down to is an intimate connection to the economics of arcade games. To wit: "Time is money." We know from interviews with industry veterans that arcade developers designed their games with a certain rule of thumb in mind: On average, players should drop a hundred-yen coin into the machine every three minutes. This was easily gauged early on, as games didn't allow for downtime at all: There's nowhere to run from the encroaching aliens in Space Invaders, and aside from some inherently brief intermissions and flashes of invincibility, Pac-Man keeps the player under constant threat of being hunted down by monsters. But as games evolved into more granular experiences, they began to allow the player more control over their pace. With this came the potential to lengthen that all-important wait for the next coin, so developers realized the need for measures ensuring the player would always be either in danger or in the process of moving somewhere dangerous.

Bosses in Gradius games abruptly explode if fights drag on too long, not to reward or even admonish the player but simply to get the screen scrolling again, hopefully to somewhere they might be better at dying. Some games track an invisible timer that spawns a hard-to-dodge hazard when time's up, such as the infamous Baron von Blubba in Bubble Bobble or the fatal mist that slowly but inexorably creeps up behind the player in Splatterhouse. Many others settled for the less organic but easily understood tactic of imposing a hard limit on the player's time and throwing it up on the screen. This was the approach Westone used for Wonder Boy, but they took it further by making the timer a distinctly prominent part of the display, depicted as a gauge so the player can watch as the color drains out of it. And it depletes quickly—far more quickly than you can complete even a single stage—demanding you gather fruit to bump it back up. This constant tug-of-war against entropy proves to be a major focus of Wonder Boy's design, as important as beating enemies and leaping hazards as you charge ever to the right, eyes peeled for the next melon.

A year later, producer Ryuichi Nishizawa found himself in a mindset that couldn't have less to do with arcade games. Much like Yuji Horii, he was obsessed with the seminal computer RPG Wizardry. But while Horii had no trouble transitioning from graphic adventures into Dragon Quest, Nishizawa was burdened by his previous success. Everyone expected a sequel to Wonder Boy. Ultimately, his solution was to take the first game's trademark urge to move and mash it up with an RPG's exploration, resource management, NPCs, and character growth. The Frankenstein child that resulted was Wonder Boy in Monster Land.

You won't find much fruit in Monster Land, but you will find money that can be spent in shops for boots, shields, and armor. As you upgrade your equipment, you can run faster, jump higher, block projectiles, and sustain more damage. Temporary buffs appear as gauntlets for offense, helmets for defense, and winged boots to make great flying leaps. You can duck into bars and listen to gossip in the form of boss strategies and directions to otherwise unindicated secrets. You'll knock on invisible doors, outsmart the Sphinx, use an array of magical sub-weapons, and even embark on a game-spanning side-quest for an item of unrivaled power. But throughout it all, true to Monster Land's heritage, you will always be under the gun to press on as fast as you can.

Shops close forever after you make a purchase, visit them twice, or idle inside for maybe twenty seconds. Aside from the shop screen, there are no menus. Your sub-weapons can't be selected; they just pile on top of each other in one big stack in the order you picked them up. And most pressing of all, the timer from Wonder Boy is back, now in the form of an implacable hourglass. When the sands run out, you'll lose one heart from a row  of only five, and then the thing flips over and starts counting down to the next heart. Recovering HP by any means (including completing a stage) will also reset the timer, but aside from that, the sand can only be restored by touching a rare hourglass item. 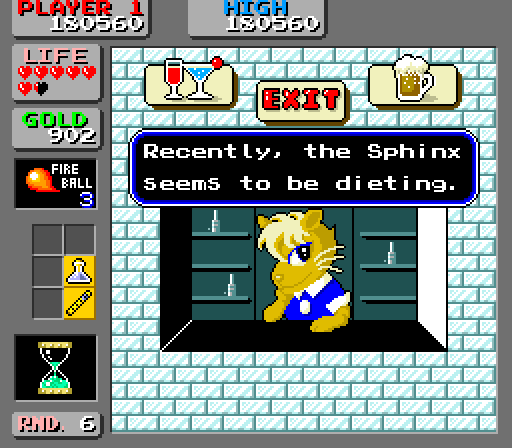 As you're pressured to advance, your first trip through Monster Land will likely be a comedy of errors where you dash past opportunities to improve your condition and rush headlong into enemies due to your slightly slippery movement. When you inevitably die, you can keep your progress as long as you insert another credit, but you lose your gold. This leads to a vicious cycle where you lack the funds to buy equipment, die because you're sorely underdressed, lose your gold...and repeat. Swords don't cost a thing, but they're all guarded by optional bosses, and you'll reach a point where these become practically unwinnable without the right gear. With enough determination, though, it is possible to bumble through the game in this sorry state—right up until the Round 11, the final stage. When you die here, you'll line up the next credit as you've done many times before...only to find yourself looking at the title screen.

Yes, in the harshest reminder that it's an arcade game first and foremost, Monster Land cuts off the ability to continue once you approach the end, ruling out even a cynical "pay to win" option. It's a shot in the gut if you're not expecting it, but this is a short enough game that you can keep most of it in your head at once. Once the shock wears off, you may find yourself thinking back over every wrong turn and how much better things could have gone—formulating an all-encompassing plan of attack. And the trip back to Round 1 may not be the cruel joke it appears to be, for it's here, in the runback, where Monster Land really starts to shine.

Come back tomorrow for what I promise will be my last time writing about Wonder Boy and/or Monster World...for a while. And I swear I'll tell you about the wiggling.