Monster Land and the pleasure of tension

As I recounted yesterday, Wonder Boy in Monster Land runs hot and cold with its enticing RPG Lite mechanics belied by unmistakable arcade difficulty. But I'm here today to tell you there is life after being thrown from the final stage straight back to the title screen. In fact, this is where the game's simplistic veneer begins to give way, revealing a textured bag of tricks the player can use to stack their odds in a rematch with the dreaded Round 11.

The first step on road to victory is raising funds, and this is where some outside information comes in handy. You'll already have found many spots throughout the game where standing or jumping causes coins or money bags to materialize, and it pays to poke around and locate as many of these as possible. However, if these invisible fonts of wealth weren't arcane enough, Monster Land layers an even more obscure secret right on top of them. By taking damage from an enemy, using a sub-weapon, or—and this is real—rapidly wiggling left and right the instant the money appears, its value will increase dramatically. Unassisted drops typically have values in the single digits, while drops manipulated in any of the described fashions will always come in between sixty and seventy. The technique demands precision, but pulling it off even part of the time will give you a major advantage.

The benefit is so crucial that it's almost unfair of Westone to have hidden it so well, but it's really another influence of the arcade scene of its day, where players needed to pool their knowledge to puzzle out how to reveal the treasure chest on any given floor in The Tower of Druaga or unlock better endings in Rainbow Islands. Fortunately, the Sega Vintage Collection release of Monster Land makes up for the loss of that cultural context by explaining these mechanics up-front in the digital manual. Developer M2, in all their wisdom, even let you map a button with the sole function of wiggling at inhuman speed. This is why they're the best in the business.

With this knowledge in hand, you'll have plenty of money; you just need to hold on to it. And the best way to do that, of course, is not to die. That's easier said than done, but just as dying the first time sets you on a downward spiral of poverty and defeat, having enough cash to buy boots and a shield at the earliest opportunity goes a long way toward keeping ahead of the curve. Treating the entire game as a one-credit affair also reveals a system where meeting certain score thresholds earns boosts to your maximum HP. Like gold, your score is reset when you die and continue, so you could spend an entire credit-feeding session unaware that you can add to your hearts at all. In fact, you can augment your initial quintet of hearts with up to five more, potentially doubling your odds of survival by the end of the game.

These windfalls afford greater margins of error in which you can practice basic skills like precision movement and positioning, and you'll wonder how you ever traded so many hits with enemies once you can reliably plant yourself outside their range and stab them with the very tip of your sword. (Aggressively wiggling at coins also has a way of helping you get a handle on your momentum.) Your mind will also be freed up to devise schemes to wring even more leverage out of the game, like dropping  a few gold on a bar drink just so the minimal HP recovery will reset the hourglass, or checking in to a hospital with nearly full health for a score bonus that'll bring you that much closer to your next heart. 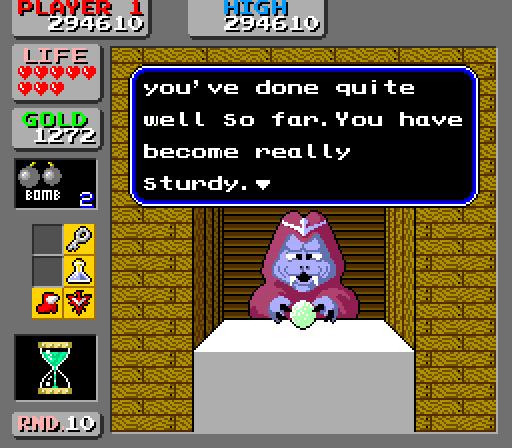 The next time you arrive in Round 11, you'll be so decked out that you probably wouldn't mind if you had to lose your remaining gold and points to a continue—but again, it's all or nothing from here on out. While you may recall from The Dragon's Trap's prologue that the castle is a maze, that incarnation is a mere reenactment, made to recall the basic concept while being short and simple enough to serve as the first area of a new game. The real thing, on the other hand, is as arduous an ordeal as you'd expect from an arcade game's final challenge. Leaving a screen via the wrong exit will warp you to an earlier position with no sense of structural logic, so your only guide is that the path forward is usually the trickiest one to reach. The reaching itself can be an endeavor as well, whether it requires defeating enemies that spawn sequentially on opposite ends of a hall or quickly leaping back and forth between a pair of alternately rising platforms.

While you're piecing all this together, of course, the hourglass continues counting down, slowly but surely sapping your hearts and heralding the Game Over of no return. There is a bell item that chimes when you're on the right track, but it can only be acquired by talking to all the right people throughout the game and foregoing a ruby that can cut the final boss's life in half. As unfriendly as the labyrinth is, the dragon at the end of it is hard to kill even at partial strength, much less without that gem. The choice is not easy, and playing this game now, staring down the very real possibility of all your carefully laid plans ending in another trip back to square one, no one could blame you for taking the ruby and looking up a map online. 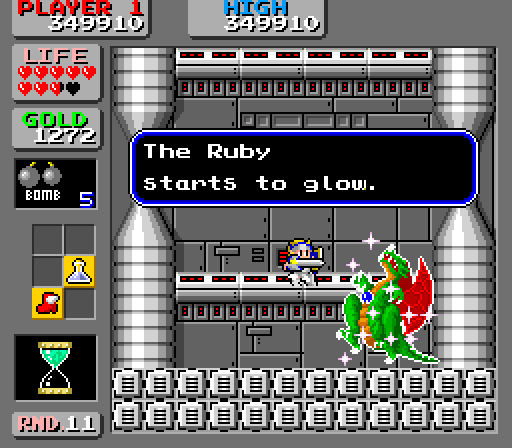 I should also note you can save and load your progress with impunity in the Sega Vintage release—a temptation I resisted until the first time I made it to Round 11 in peak condition. I admit it: I was so pleased with my progress and balked at the thought of doing it all over again if I died in the final stage. And died I did. Now empowered by the clemency of retro rereleases, I simply loaded my save to try again. My second attempt went about as well as the first, but the third time was the charm. I beat the game...but I didn't really feel like I'd won. I'd nearly gone the distance on Monster Land's own terms, and I knew merely watching the credits roll couldn't be as exhilarating as sealing the deal in one beautiful, unbroken assault on the dragon's castle. Far from feeling done, I couldn't wait to start over from Round 1. Half an hour later, I beat the game again. First try—didn't even need to use the life medicine I got in Round 10. And though I was back where I'd just been, watching the same credits roll, the feeling couldn't have been more different.

This, at last, is Monster Land's greatest strength, perfectly encapsulating how our experiences with games can be transformed simply by altering our approach to them. First you learn to keep moving because the game demands it, and you might figure that's what it's about. When moving by itself proves insufficient, you gradually learn to make strategic considerations and identify the opportunities provided to you. Once you're at this level, you can focus on honing your skills, and only when you've mastered them can you finally put together a winning run. (And somewhere along the way, you learn to wiggle.) Each layer you uncover requires your mindset to evolve and adapt, and it rewards you with an ever-increasing sense of accomplishment. Save-scumming may get you to the end, but you might not look back on what you beat as anything more than a pleasant diversion. However, should you engage and appreciate everything it has to offer, you just might remember Wonder Boy in Monster Land as one of the most satisfying times you've ever spent with a game.