After touching on the origins of Puyo Puyo last week, let's trace the history of one of the most prominently advertised features in the latest release, Puyo Puyo Tetris. The main hook, of course, is the titular coupling of Puyo Puyo with the classic Soviet mind game. While both are puzzle games where you drop pieces into a well, they feel very different and of course comprise different working parts. You might not even guess they could be mashed up in a way that works, but Sega took advantage of the fleeting opportunity that is any deal with The Tetris Company to thoroughly explore the possibilities before them. So you can play Tetris against someone playing Puyo Puyo, crushing the Garbage Puyos sent your way with Tetriminoes; or you can play a mode where you continuously switch between the two styles every time a timer runs out, while maintaining the same well of pieces; or you can go all-in and effectively play both games at once, using Puyos and Tetriminoes alike to clear both lines and colored groups of pieces. It certainly makes for a novel experience...but we're here to talk about old things, not novelty. Fortunately, it just so happens that another feature of Puyo Puyo Tetris, while implied to be novel, in fact has a secret origin stretching nearly to the beginning of the series. I speak of course of the "frantic four-player" emblazoned on the game's logo.

Puyo Puyo introduced four-player way back in the second arcade game, 1994's Puyo Puyo Tsū, but the form factor left something to be desired. The game screen only accommodated two players' wells, so two cabinets needed to be linked to get up to four, making it hard to appreciate the big picture. This was less than ideal even in the advanced environment of arcades, so most of the game's home ports abandoned any hope of carrying over the feature. Hooking up two systems to two TVs probably wouldn't even have been too much to ask at the height of Japan's Puyo Puyo mania, but the technology simply wasn't there. Some of the only ports to even attempt to recreate the experience were the humble portable versions, where players could link two Game Boys or Game Gears via a link cable and play a simulated "four-player" match with two computer-controlled opponents. (The Game Gear version is on the Japanese Virtual Console on 3DS, and the wizards at M2 even engineered the system link to work wirelessly, allowing you to experience this bizarre cludge on modern hardware...if by some chance you want to.) Some computer versions also supported four-player, introducing the world to Puyo LAN parties. 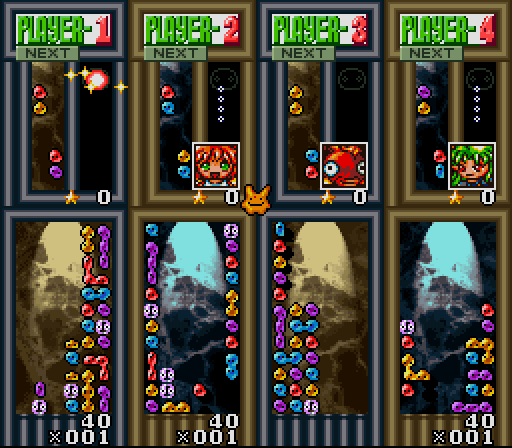 But the only console version to try its hand was the Super Famicom release, naturally dubbed Super Puyo Puyo Tsū. Sega's home port enjoyed nearly perfect accuracy to the original thanks to the close resemblance between the Mega Drive and their System C2 arcade hardware, and the PC Engine version flaunted its CD capacity with full voice acting for the skits that run through the game's story mode. The Super Famicom version couldn't match up to these feats, but it did have the benefit of being made by Compile, the game's original developer, who made up the difference with a number of exclusive modes, including the return of four-player.

This came with its share of technical hurdles, of course. Without some way to link Super Famicoms, all four players needed to share one system, requiring a peripheral like Hudson's Super Multitap to connect enough controllers. Not only that, but without two displays, four players also needed to share the same screen. The Super Famicom's 256-by-224-pixel resolution already meant the game's layout had to be narrowed down from versions on hardware with 320-wide displays, so how could it possibly fit four wells on the screen at once? Compile's solution turned out to be the same method used to get Puyo Puyo on handhelds: In addition to moving things around, shrink the graphics themselves. The Puyos, which are normally 16-by-16 objects, got quartered to single 8-by-8 sprites—the most basic unit of graphics for practical use. With this, everything just barely squeezed into place.

This version proved popular enough for Compile to follow it up with an improved rerelease, called Super Puyo Puyo Tsū Remix. After that, though, only a few Puyo Puyo games included four-player, usually coming on systems with four built-in controller ports, like the N64, Dreamcast, and GameCube—or in the form of the GBA game, which in Japan was proudly named after the mode itself: Minna de Puyo Puyo. If you go looking for older titles in the series, you definitely have to hunt to find one that allows Puyo Puyo en masse. But things have since turned around, and it's practically become a series standard here in the age of wireless communication, sometimes allowing for as many as eight players.

While it appears hardware limitations were the only thing holding this feature back, one could argue the more aren't necessarily the merrier. At its core, Puyo Puyo is a head-to-head affair, where strategic play means reading your opponent, identifying the combos they're planning, setting up escape routes to mitigate incoming Garbage Puyos, and determining not only the right move but the right time to make it. Keeping all that in your head at once demands some high-level concentration, and that's when you only have one opponent to worry about; adding two more could run up against the human brain's capacity for processing information. As such, Puyo for four or more ends up less considered and more chaotic, sliding over into "party game" territory...but that's not such a bad thing. Again we find there's more than one way to enjoy a game, and it turns out Puyo Puyo is a great time whether you're out to crush the competition or just messing around with friends. It's the same "Why not?" approach that sees Sega dropping Tetris into the mix, and by the same token, it works.