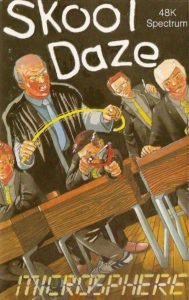 If you live in Britain and you're a kid (you can tell if you're a kid or not through various checks such as: Do you own a slingshot, how much "tuck" do you consume in a day, do you have friends named Tucker and Gonch, etc.) then chances are good that right now you're enjoying your half-term holidays -- a full week away from the daily rigours of the classroom and bundles of the playground. However, back in the '80s, some people actually chose to experience school again in their home! Quite shocking, really. They did so with another legendary '80s ZX Spectrum game - Skool Daze, released by Microsphere in 1985.

The plot of Skool Daze (yes, this Spectrum game has a plot) is as follows -- you play as a boy named Eric, and you need to get to your end of year report because it's all F's and, in the words of Soulja Boy, you've got to throw some D's on it. Getting to the report involves a strange process of activating the school's shields, then finding out each letter of the code to the headmaster's safe, grabbing the report and then putting everything back to normal...however - as you do this you also have to go through a school day, meaning that there's often somewhere you're going to have to be whenever the bell rings and progressing the game is going to have to be restricted to playtimes...unless you're brave enough to bunk off lesson, that is. There's plenty of other boys milling around -- Boy Wander the tearaway who likes to fire his slingshot and write on the blackboards, Angelface the bully who randomly punches people and contracts lethal doses of mumps, and the dreaded Einstein - the swot who is all too eager to tell on you for every single thing that the other two nasty little brats do. All this and a lot of smaller, unnamed oiks who can actually be a bit more helpful -- at least they don't hit you.

Winning in Skool Daze is all about trying not to get "lines" -- if you get 10,000 of them, then the game's over.  Sometimes its impossible not to get them, such as when you're in a class where there's not enough seats, but you've got to try and be as stealthy as possible about your task -- especially when certain shields require you to bounce shots off of a downed teacher's head. Speaking of the teachers, they're as well-drawn as the boys are and perfect for the era -- there's Mr Rockitt the Lab Guy, the absolutely ancient Mr Creak, and my favourite Mr Withit -- the teacher who thinks he's liked and down with the kids because he doesn't tuck his shirt in. And of course, the dreaded Mr Wacker -- the headmaster, who walks around while rhythmically rapping a cane against the palm of his hand, eager for any opportunity to beat children and comfortable in the knowledge that back in the '80s, giving a young boy six of the best was yet to be frowned upon by law.

Skool Daze's combination of school-related busywork, a lengthy task that you have to achieve, and the atmosphere of a British comprehensive or secondary modern is an assuredly winning one -- there's very few games like it. The game did become a raw template for Rockstar's excellent Bully, which certainly made a lot out of the basic formula. More immediately, there's a sequel to the game called Back to Skool that's just as good as the original -- there's a whole new task and a whole new school (a girls' school!) to rush about in and cause trouble. Both of them are up there with the Speccy's greatest, and they're still some of the most modern-feeling games you can find on the computer -- what a joy they were. If you remember not to run in the corridors, chew gum and tuck your chair in when you leave the classroom, Skool Daze will be the perfect game for you.