This morning, Nintendo shocked Metroid fans with a teasingly scant announcement that Metroid Prime 4, the first Metroid Prime title in a decade, is currently in development. Not long after, they followed up that news with the reveal of Metroid: Samus Returns, a 3DS remake of 1991's Metroid II: Return of Samus and the first 2D Metroid game since 2004's Metroid: Zero Mission. This one-two punch comes as an overwhelming relief to fans who have been waiting on the series' return to glory ever since it went dark in the wake of 2010's Metroid: Other M (a thirst last year's Metroid Prime: Federation Force did little to quench). More specifically, fans have been calling for Metroid II to receive a ground-up reimagining ever since Zero Mission performed that treatment on the first Metroid to great success. It seemed like such an obvious opportunity that fans eventually resorted to taking matters into their own hands, with a number of groups devising home-grown Metroid II remakes of their own. Just last fall, one of these projects—ironically titled Another Metroid 2 Remake, considering it was the only that made it—finally reached completion after years of development, only to be squashed almost immediately by a cease-and-desist order from Nintendo. While Nintendo was well within their rights to defend their intellectual property, the move was met by an outcry from fans who saw it as poor form not to let this labor of love slide beneath official notice, especially considering Nintendo themselves seemed to be fast asleep on the series (they did release Federation Force around this time, but the comparison only served to strengthen the argument in favor of AM2R). Now it appears we know exactly why Nintendo was so quick to rub out AM2R: By total coincidence, it was about to be in the right place at the wrong time.

Fortunately, Samus Returns appears to be a much more suitable replacement for AM2R than Federation Force was. Granted, Metroid creator Yoshio Sakamoto, who personally earned a vote of no confidence from fans for his botched attempt at cinema in Other M, is running the show, and development is being handled by MercurySteam, the Spanish studio largely known for the deeply unfortunate Castlevania: Lords of Shadow series. But if I may quell the anxieties associated with those names, Nintendo showed off the game for the better part of an hour on their Treehouse stream, and so far, there's no sign of Sakamoto's narrative indulgences; aside from some non-intrusive blurbs of tutorial text, Samus is mostly left to her own devices as she plumbs the depths of planet SR388, with no internal monologues about her mentor's irresistible charisma nor any men telling her when she can use which power-ups. As for MercurySteam, they're a contract developer who ultimately have to follow their client's orders, and until proven otherwise, I'm fairly confident laying the blame for Lords of Shadow on Konami. A publisher like Nintendo ought to be able to bring out the best in them, and what we've seen so far seems to back that up.

Samus Returns appears to play as you would expect of a 2D Metroid, with Samus's movement based on the high-gravity, low-range jumping of the Game Boy Advance games in particular. Items exclusive to the original Metroid II are still here—specifically the Spider Ball, which allows Samus to roll along walls and ceilings in ball form—as is the Grappling Beam, which hasn't been used in a 2D outing since Super Metroid, along with series standbys like the Space Jump. Sequence-breaking techniques like bomb-jumping and wall-jumping are still in, although the latter looks like it might be the kind from Metroid Fusion that was severely limited by its need for two parallel walls. Samus's ledge-grab from the GBA games also returns, apparently as an innate ability.

In addition to the old, though, Nintendo is mixing in a variety of new mechanics, such as the ability to plant Samus's feet and point her arm cannon freely in any direction, no longer limited to the eight-way aiming of yesteryear. With precise timing, Samus can also counter enemies that try to attack by physically colliding with her. When pulled off against bosses, these maneuvers call to mind the stylish grapples of Other M: Send a Zeta Metroid flying, for example, and Samus will chase it through the air, slam it to the ground by its tail, and fire point-blank into its exposed nucleus. She'll also come across Aeion abilities, which draw from a special meter to bail her out of sticky situations. Those shown include the Beam Burst, a continuous barrage of laser machine gun fire; the Lightning Armor, which nullifies damage in exchange for a chunk off the Aeion gauge every time Samus gets hit; and the Scan Pulse, which reveals local map data and hidden paths, functioning like an area-of-effect version of Super Metroid's X-Ray Visor. Samus's move set is one area where the series began to stagnate by Zero Mission and has often been raised as one of the first areas that would need addressing if the series ever continued, so it's nice to see Nintendo has given her so many new toys to play with. 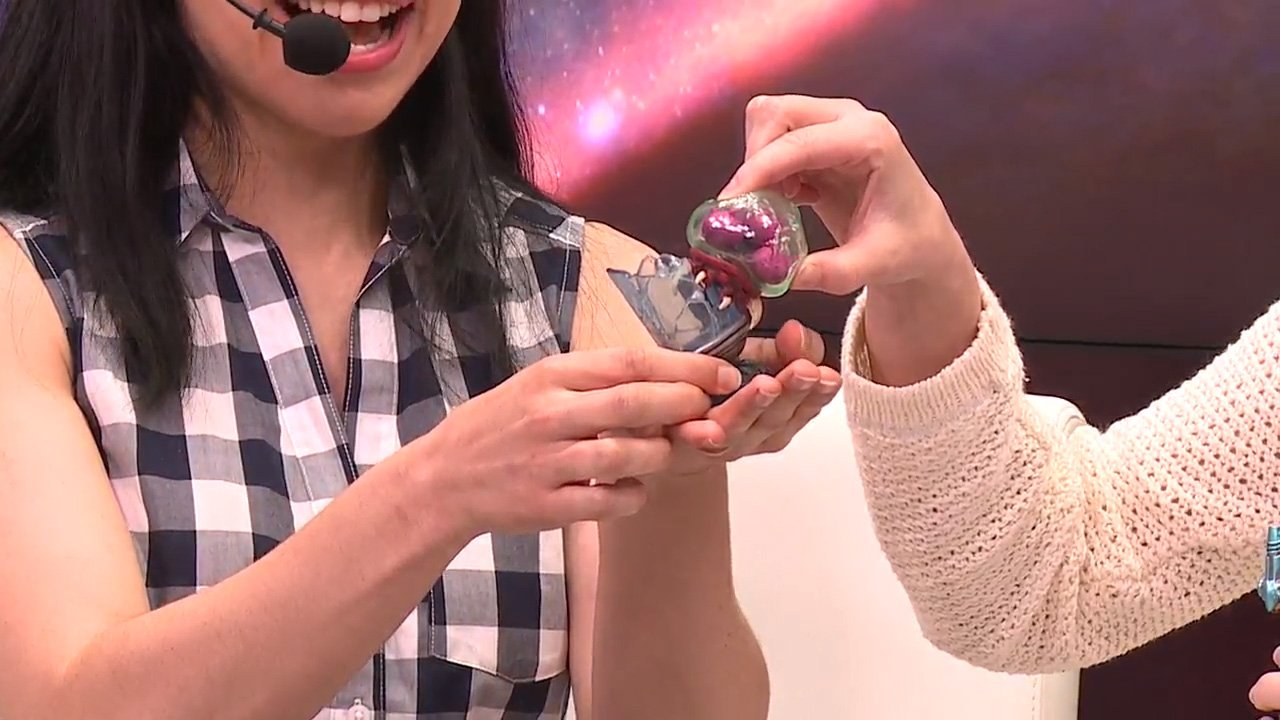 In keeping with modern sensibilities, there are, of course, new Amiibos to go with the game. Like the Amiibos for Yoshi's Woolly World, which were actually crafted out of yarn, the baby Metroid here features a unique construction in the form of a squishy membrane.

Samus herself is just one part of Metroid, though: Just as important are the world around her and the things living there. The Metroids she's charged with exterminating come in a number of forms, many of which have never been seen since Metroid II, so Nintendo and MercurySteam have seized the chance to update them for the first time since 1991. Their behavior originally boiled down to charging Samus and spitting the odd projectile with varying levels of aggression, and while that clearly remains the basis, it's been fleshed out with a range of action befitting proper boss fights. Gamma Metroids can now rain ball lightning, fire focused beams of electricity, and electrify the ground around them, while Zetas can spit volleys of acid aimed at Samus and shoot slow-moving spread shots that rebound off walls. They have new vulnerabilities, too, as Samus was shown stunning a Zeta by prying it off a cave ceiling with the Grappling Beam.

As for the world itself, the new SR388 seems relatively short on the cold creepiness of Metroid II's stark monochrome expanses, but Nintendo and MercurySteam have lent some variety to the original game's often-repetitive structure in the form of more diverse level design and environments. You'll be able to embellish on the game's functional auto-mapping with manual map annotations, using a set of icons (not unlike Etrian Odyssey) that grows as you encounter new kinds of obstacles. They've also added warp points as a way to quickly backtrack to the various regions of the planet's cave system. While new to Metroid, this feature will be familiar to Metroidvania connoisseurs—and although it's often criticized as a cheat to get around inelegant map design, it actually fits perfectly within Metroid II's framework, which is less a densely interconnected world than an inverted tree trunk with single branches splitting off from it one at a time. For all its reimagining, Samus Returns seems to retain this concept, so warping back to isolated regions should prove a welcome convenience.

From SR388 to the Metroids and Samus herself, the M.O. for Samus Returns seems to be extrapolating and adapting Metroid II's design for an all-new experience while preserving the spirited uniqueness at the heart of it. It that ends up holding true, we may be looking at another classic reimagining to stand aside Zero Mission; if not, well, at least it's a proper new Metroid game, and goodness knows that's a rare pleasure these days. Samus Returns is scheduled for release in three months, so either way, we'll find out soon...but after thirteen years, not nearly soon enough.