With ARMS, Nintendo is smart to recognize that nostalgia isn't always best

It was strange, watching Nintendo cleanse Switch of its own heritage, especially as the NES Classic mini-console was selling like gangbusters. Millions of people have just revisited Punch-Out!! via that device (and millions more long to do so, an experience now forever denied by Nintendo's decision to kill the NES Classic before it ever truly lived). Why not capitalize on the brand's reappearance in the pop culture mainstream with a modern-day sequel?

But no; ARMS instead introduces an entirely new cast of 10 fighters, not including bosses and future downloadable add-on brawlers. Despite revolving around a premise that could potentially elevate the Punch-Out!! concept to the next level — motion-based fisticuffs, a brilliant advance over the Wii Punch-Out!!'s great Balance Board support — there's not even a hint of that storied arcade/NES favorite to be seen here. No Little Mac cameos, no cheeky text callouts that I've seen, not even a fuzzy-looking Bald Bull hiding in the crowd scenes. ARMS completely divorces itself from its obvious spiritual antecedent, and as someone deeply invested in the history of video games and the observation of landmark works, I have to say... it was probably the smartest move Nintendo could have made for the game. What I initially pegged as a senseless and irresponsible decision has proved to be anything but. 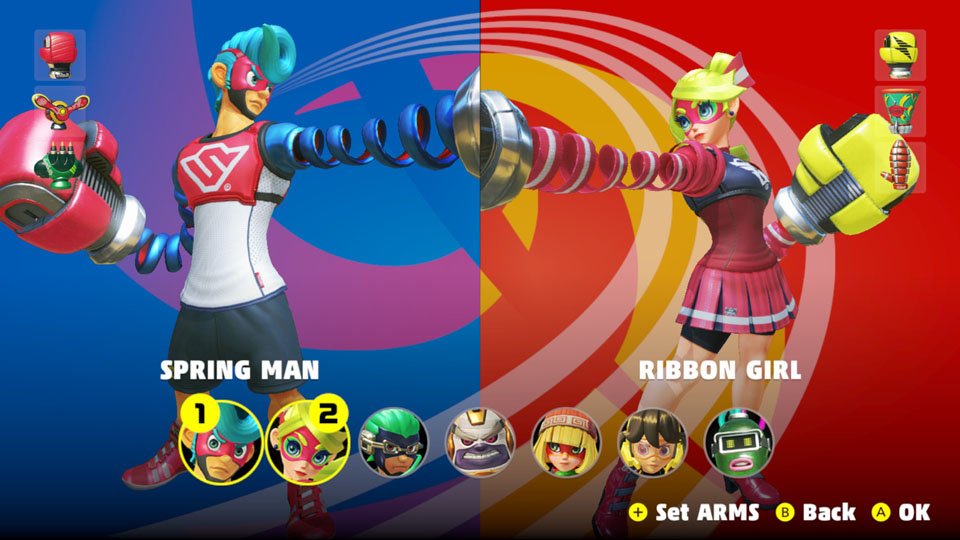 ARMS isn't Punch-Out!!, and I don't mean simply in the sense that it has a different name and cast. It is functionally and fundamentally a distinct work unto itself, and the creativity that radiates from ARMS in every respect would have been completely suffocated by the need to adhere to a 30-year-old brand. I can't imagine that ARMS made it all the way through its conception and planning stages without someone at Nintendo saying, "You know, this game would make a lot of sense as a Punch-Out!! sequel." Heck, it even could have kept its sci-fi look — it's not like the idea of a spaced-out Punch-Out!! sequel hasn't been explored already. But Punch-Out!! brings with it certain expectations, like somewhat sensible boxing mechanics... and while I do think Little Mac's dodge-and-counter style would be an extraordinary fit for Switch's advanced motion controls, his tiny little arms wouldn't be able to, say, fire independently across an arena to punch an opponent 30 meters away.

There is a tendency among Nintendo fans, and I admit I'm guilty of this myself, to expect the company's games to conform to our expectations as we grow older. I think Nintendo fell into that trap themselves in recent generations, attempting to mine nostalgia and familiarity with sequels and reboots, especially on Wii U. For the most part, those efforts didn't pay off. Meanwhile, Splatoon was their one creation that came from nowhere, and it managed to become a huge hit; it's popular in the West, but it's currently a top-five gaming franchise over in Japan, a country where multiplayer-only arena shooters have never had any real traction to speak of. While Splatoon could easily have come into the world as a multiplayer Super Mario Sunshine spinoff, Nintendo let its designers do their own thing. Those designers then came up with the sarcastic, pun-spewing sisters Callie and Marie and, more importantly, the endearing squid/kid dichotomy. More than simply being characters, Splatoon's Inklings tie into and shape the game's play mechanics, allowing players to explore a unique tactical concept by vanishing into puddles of paint and swimming around below the surface as a squid. Splatoon without transformation and submerging would simply be another arena shooter. Since it was allowed to become its own unique thing, it fired up imaginations and caught on in a big way, clearly exceeding Nintendo's own expectations for the game.

ARMS has the potential to do likewise. Like Splatoon, it features a cast of interesting new characters (with a pretty even mix of male, female, and indeterminately alien pugilists to control). Its vibrant visual style, which relies on bold yellows and other primaries, neatly fleshes out the color wheel when set up alongside Splatoon's purples and greens. And most of all, it will remind you of classic Nintendo concepts, but it quickly sets itself apart with design ideas and play opportunities that would have been impossible if the company had simply continued mining its back catalog. ARMS is a comic take on boxing, like Punch-Out!!, but there's no way that gatekeeping Punch-Out!! fans would have accepted a sequel that involves things like controlling a young girl in a robot suit as she punches missiles toward a robot policeman and his mechano-K9. 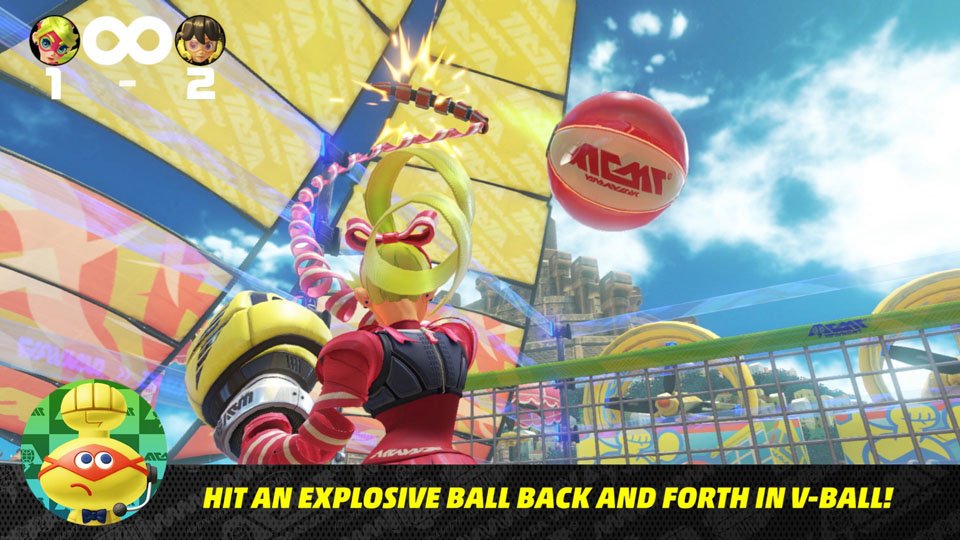 You also wouldn't be see Punch-Out!! title journeys broken up by matches that take the form of minigames. Nope. No way would the fans stand for that.

ARMS embraces a ridiculous, over-the-top style (within its long, rubbery embrace)... but perhaps most importantly, it allows players to control more characters than a single scrawny dude in green boxing shorts. Again, the cast of ARMS consists of a wide variety of pugilists, including four different women, several men of varied body types (from slim to shredded), and a couple of weirdos like the gelatinous Helix. Anyone should be able to find a character they relate to within the game's cast, which will absolutely be a key to its success. I'm fairly certain that Overwatch has done more to convince developers that it's essential to give players the opportunity to imprint on their own favorite character from among a varied cast than thousands of games-press thinkpieces on the importance of character diversity could ever hope to accomplish. Of course, immense playable lineups have been a standard fixture in fighting games since Street Fighter II exploded onto the scene, but Overwatch revolutionized the nature of those characters and their relationships... and, perhaps more essentially, it played up the importance of highlighting those characters and hyping them up to ignite players' imaginations. ARMS is the first new Nintendo invention of the post-Overwatch era, and they clearly took notes from Blizzard.

The overwhelming positive response that arose after Nintendo revealed Twintelle a few weeks back underscores this fact. She immediately became a fan-favorite to the point that the company hastily made her playable during the pre-release "test punch" demo weekend. Was it her confident attitude? The fact that she attacks with ropes of prehensile hair rather than the freakish extensible arms of the rest of the cast? The camera's tendency to focus on her curvaceous, leather-clad backside? Well, yes, all of those things factored in (especially her backside)... but in asking around about her meteoric rise to public acclaim, I was told by several people that it boiled down to the simple fact that it's so rare to see a person of color — and a woman, at that! — presented in a game without any tired or offensive stereotypes. Sure, she's thicc (as the kids these days say), but in a sensible (not exaggerated or pandering) way. More importantly: She's a tough, capable, elegant woman with dusky skin. You sure wouldn't find someone like her in Punch-Out!!, a franchise that trades entirely in racial and cultural stereotypes. 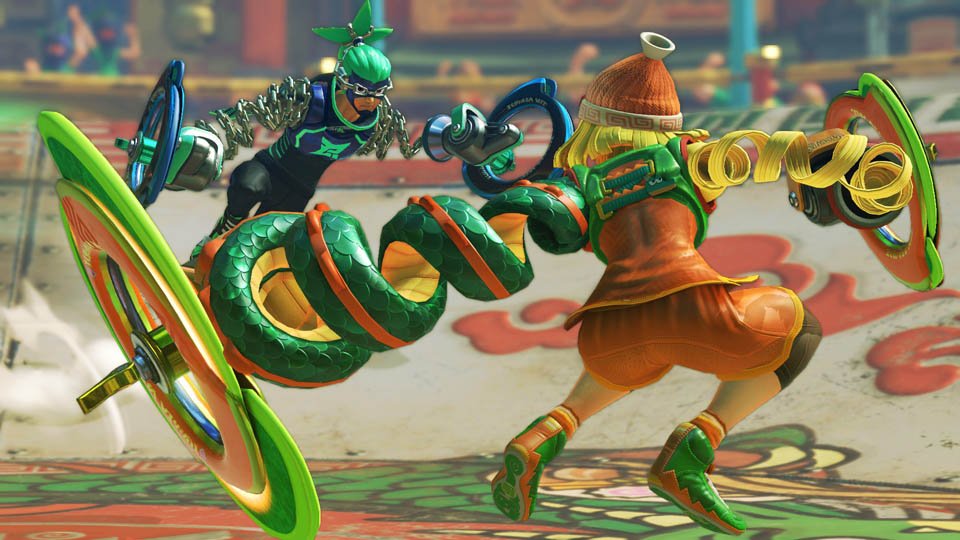 Of course, ARMS still has Min Min, the Chinese fighter whose arms are made out of coiled ramen noodles by default. Baby steps, I suppose.

I'd like to see Next Level Games take another crack at Punch-Out!! someday, but I'm glad this wasn't that game. I don't doubt that, should it be a hit on Switch, 20 years from now we'll find ARMS just as locked into its ways and trapped by its own legacy as Punch-Out!! is today. And maybe that's OK. Nintendo seems to have crafted a specific creative process in recent years: Come up with an idea and iterate on it in tiny increments, while saving the new ideas for new games. I do miss the days of the NES, when sequels like Super Mario Bros. 2, Zelda II and Metroid II demonstrated no fear in casting aside the structure and rules of their predecessors... but given those games' black-sheep status among fans, and even the negative backlash franchise spinoffs like Luigi's Mansion and Federation Force have taken on the chin in more recent years, I suppose I can understand why Nintendo prefers to play it safe with sequels. Games like ARMS and Splatoon allow the company's designers to invent in ways that tradition and expectation make impossible under the umbrella of established brands. It doesn't always work out — for example, 1-2-Switch lacks a personality and would have been a lot more interesting as a WarioWare title — but when it does work, as with ARMS, I'm happy to see Nintendo intuiting when it's best to let go of the past.