Mario & Luigi and going back to basics

Nintendo has dropped some major bombshells at this year's E3, but one story that's threatened to creep under the radar is the announcement of Mario & Luigi: Superstar Saga + Bowser's Minions, the latest installment in the Mario & Luigi series of RPGs. It makes sense in a way, as it's a bit of a rerun—updating Mario & Luigi: Superstar Saga, the series' 2003 debut, in what appears to be as staid a manner as possible. The graphics and audio have been completely redone, and I spotted some convenient changes to the interface using the 3DS's touch screen, but other than that, we seem to be looking at a shot-for-shot remake. Nintendo didn't even see fit to bestow this release with a more evocative title, emphasizing that it's essentially the same game from fourteen years ago in a new guise. That does leave room for the "Bowser's Minions" part, but that refers to a new mode with gameplay cleanly divorced from both Superstar Saga and the series in general, eschewing turn-based RPG battles for bite-sized RTS stages and roster management.

To be fair, Minion Quest: The Search for Bowser seems well-made for what it is: New content added to rereleases tends to be predicated on recycling, remixing, and generally stretching out the use of existing assets as far as possible, so it's admirable that Nintendo and original developer AlphaDream have put in the effort to create something truly new. The other pitfall in creating add-on content is that even if it's well-designed, it ends up being over the player can sink their teeth into it, but Nintendo claims Minion Quest is a lengthy experience with robust mechanics and a story that runs parallel to that of the main game, following Bowser's army of Goombas, Koopa Troopas, et al. as they strive to put themselves back together and reunite with their king following the explosive events of Superstar Saga's prologue.

Most of Nintendo's coverage has focused on the addition of Minion Quest, and what we've seen of Superstar Saga hasn't looked far removed at all from its original form. If anything, the new visuals, which use the same style as the other Mario & Luigi games on 3DS, come off as a bit less charming than the old GBA graphics. From the beginning, the series has used 3D models as the basis for its character sprites, which at first were flattened out and touched up for an end result that could pass as suspiciously fluid pixel art. When the games jumped from DS to 3DS, though, AlphaDream threw out the thick black outlines and bright, cartoony colors in favor of softer edges and more intense shadows, so characters and enemies began to look much closer to their 3D source material. Now they can even apply detailed real-time lighting effects to the sprites, lending them an even greater sense of volume, but these technical achievements come at the cost of obscuring once-simple imagery and diluting the specific appeal of 2D art.

Aside from appearances, if this version does turn out to be as rote a remake as it seems, it'll be a shame if Nintendo wastes this opportunity to restore some of the original game's unused content, which included cameos from characters such as Olimar, Fox McCloud, and Samus. But if nothing else, the revised audio should easily trounce the GBA's heavily compressed excuse for sound and finally sample Yōko Shimomura's jaunty compositions at a bit rate they deserve. Personally, I can't wait to listen to Popple's theme with unprecedented clarity.

Perhaps the relative lack of hype for another Mario & Luigi can ultimately be blamed on series fatigue. While the series once stood confident as the first and last word on Mario RPGs on handhelds, that sense of identity and purpose has waned as the Paper Mario games have muscled in on the portable scene. With each successive title, the series' focus (or lack thereof) has also drifted more and more toward mini-games and other gimmicks in the pursuit of variety, if not some perceived need to justify its continued existence. Admittedly, even Minion Quest feels like it still hasn't let go of that urge. In light of these misgivings, though, now might actually be the perfect time to return to the series' roots. 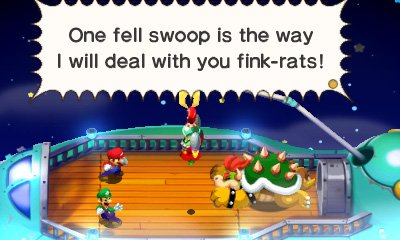 I probably should have been sick of Fawful by the time he rose to main villain status in the third game, but I could still read his zany malapropisms all day.

To this day, Superstar Saga remains an impressive achievement, ingeniously designed around the GBA's limited interface in such a way that the player can easily attack and defend with two characters, simultaneously, with just two face buttons—one for each of them. In battle, Mario and Luigi can team up for "Bros. Attacks" that play out as a kind of elaborate choreography, requiring each of them to hit their cues in real time in order to pile damage onto enemies; by default, these guide the player with on-screen prompts and generous windows for input, but with practice, you can switch these off for a dramatic increase in power (if, that is, you manage to land the attack), turning combat into a hectic, high-stakes rhythm game. In the field, the brothers can join in "Bros. Moves" that allow them to traverse areas in various ways, from helicoptering across pits as a human totem pole to driving Luigi into the ground with Mario's hammer so he can burrow around like Bugs Bunny. These techniques add both a puzzle element and an appropriately Mario-esque level of platforming to your exploration of the Beanbean Kingdom.

Superstar Saga has a lot going on, but its design is tempered by a clarity of vision and focused through a strong sense of confidence. Far from overwhelming, it cultivates a breezy atmosphere which carries over to an upbeat soundtrack and a comedy of a story, all adding up to a remarkably fun experience. The Mario & Luigi series has had its ups and downs, but if there's any entry worth repeating verbatim, this is certainly the one. Perhaps it's for the best that the new content is being served on the side, and left as-is, Superstar Saga can serve as a renewed example for future endeavors in simple brilliance.