Viz: An incredibly rude officially released game from 25 years ago

People tend to think that the rise of things such as sex, violence and swearing in video games is something rather modern that came with the PlayStation era, and the likes of Grand Theft Auto or whatever...and of course, they're kind of right in that regard -- once games like that arrived, shits and fucks and heads and limbs gradually started flying all over the place. However, you do find the occasional strange outlier from an earlier time that, in their own odd way, showed what the future would be like...such is the case with Viz, a licensed game that saw release on computers such as the Amiga, C64 and ZX Spectrum back in 1991.

For those of you who don't know, Viz is an incredibly rude UK comic, an adult send-up of the likes of the Beano and what have you, that had its roots back in Newcastle-upon-Tyne in the 1980's. It documents the adventures of the likes of Sid the Sexist, the Fat Slags, Buster Gonad (and his infeasibly large testicles, which you can see in the picture), Spoilt Bastard, and Terry Fuckwitt. It's thoroughly crass, mostly hilarious in its classic period, and at times very popular -- indeed, popular enough for Virgin to make a game based on it, where you control either the aforementioned Mr. Gonad, Biffa Bacon or Johnny Fartpants in a race through the famous land of Fulchester where the comic's based, as foul-mouthed drunken TV personality Roger Mellie comments on the action.

It has to be said that this adaptation certainly didn't make any compromises just because it's a computer game, and something that children might play. Not even a minute in, and Roger Mellie (host of such shows as "Fuck a Duck" and "Opportunity Cocks") is dropping C-bombs left and right. Other foulmouthed denizens of the comic such as The Parkie and Aldridge Prior also make plenty of cameo appearances...the one that perhaps sticks out to me the most is in the nightclub stage, where one of the obstacles you have to avoid is a man and a woman, locked in intercourse, while the bloke is puking up his drink over the lady's back. It's all very classy indeed, as you can tell. Certainly makes the longplay an interesting watch.

And yes, all of this is in a 1991 game! Sure, as with the comic itself, there's a big marker on it saying that it's not for sale to children. Mind you, I recall playing it back in the day because back in 1991, a demo of the bloody thing was the star of a Your Sinclair cover tape! I played this when I was 6, a mere stripling exposed to the sight of a young man carrying his disproportionate scrotal sacs around on a wheelbarrow...which probably explains a lot to be honest. At the very least it explains why I have such a big collection of Viz annuals...as it goes, the game itself is pretty rubbish -- a generic and rather annoying racing game, although it's always something that people ask to see whenever I go on stream just for the surreal nature of it. While I wouldn't exactly recommend trying it out for yourself, it's at least worth a watch up there as one of the oddest little licensed titles ever made. 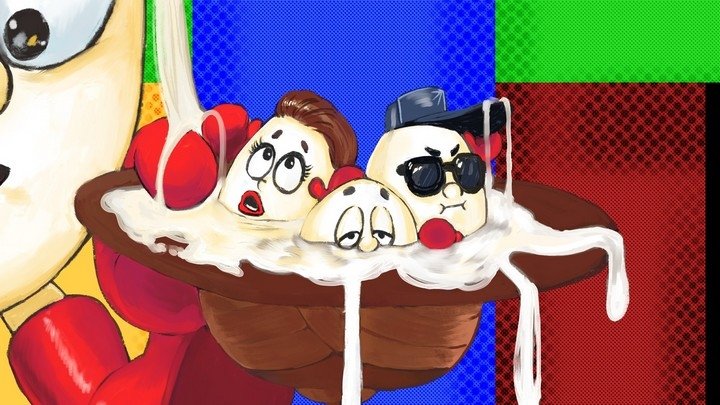