I'm sure you're all well aware of the irritating and somewhat bizarre issues surrounding the classic Doom ports that dropped late last week: low locked framerates, audio playback issues, persistent unaddressed quirks that remain unfixed from the decade-old XBLA conversion and pervasive "requests" to sign up for the bethesda.net account service, to name just a few. What you may be less aware of is the fact that the Doom 3 port is... actually completely fine, oddly enough.  Accidents do happen!

What's this? The second game in SNK's Ikari Warriors trilogy of macho loop-level arcade action games, released in arcades in late 1986 just months after the original; the gun-toting commandos Ralph and Clark return but instead of fighting a war through a jungle, they're blasting... demons? within a... space/time rift?

Why should I care? You need to verify for yourself that, yes, the second Ikari Warriors game is about robocops with broadswords slaughtering aliens inside cosmic hell ziggurats, and you're content to never understand why.

Useless fact: For as corny as Victory Road's voice clips are, they won awards in the Japanese games press for their high-fidelity audio playback.

King of the Monsters 2

What's this? The followup to SNK's popular kaiju wrestling game, released in arcades in 1992 and on various consoles a year later; KOTM2 sees a pared-down cast trekking through scrolling arenas to battle a much wider menagerie of beasts in a manner that more closely resembles a conventional beat 'em up. ("The Next Thing" isn't a clumsy attempt at emphasizing the newness of the game, it's literally the name of the invading alien force.)

Why should I care? You want a more substantial single-player experience than the previous game and you don't mind that it' not the least bit fair.

Useless fact: If you don't like the format change and pine for a true sequel to the original KOTM, look no further than the Mega Drive version of KOTM2, which is not a port but a complete reimagining of the game in the vein of the original, with a wider cast of playable characters and fighting game-style command moves for each monster.

What're these? Slapdash ports of two ageless, canonical titles and one reasonably well-aged tech demo, released with no fanfare in order to hype up an impending AAA title of dubious lineage. (The first two games are labeled with the "(Classic)" designation because the naming convention for the Bethesda reboot series is dumb.)

Why should I care? You're still entertained by the spectacle that comes with Bethesda's utter fumbling of everything they touch.

Helpful tip: You can already play the classic Doom games, with support for limitless amounts of fan-made content and no dual purpose as a trojan horse for an annoying account system, on literally every electonic device you might own.

What's this? A remaster of the again-but-with-a-girl sequel to the successful stealth-action game Saboteur, developed by Clive Townsend for the European microcomputers of the day and released in 1987; this version allows you to select graphics and audio from five different version of the game and promises new levels, enemies and music.

Why should I care? I've not played this one so I can't speak one way or the other on whether it's worth your time, but I do know they're counting on the sales of Saboteur II to fund a brand-new Saboteur III, so perhaps some of you may want to buy it out of some perverse sense of duty to a thing you once liked.

Useless fact: The listing for this game touts it as " the first video game to feature a female protagonist". It, uh, isn't.

Just getting the 150-game Atari Flashback Classics compilation on Vita in any form was an uphill battle for developer/publisher Code Mystics, so this packaged release serves as a nice capstone to a passion project. As always, pre-orders start Friday 10AM Eastern and the small print order is going to be compounded by the extra-rabid Vita collectors, so look sharp.

The Art of Tekken: A Complete Visual History book from Dynamite Entertainment

Tekken's managed to deftly navigate a quarter-century of technological advancement, fierce competition and a waning arcade market to firmly cement itself as the tentpole of the 3D fighting game genre, and this book chronicles the series' visual history with a large collection of promotional and development renders, rarely-seen 2D concept art and interviews with key visual designers from across the seven main-line games and other associated projects. I haven't read the book but I feel safe in betting that those of you who do are going to see a lot of flame decals.

Due to popular demand, Felipe Pepe's comprehensive 400-deep anthology of CRPG reviews is getting another printing — once again, this is a non-profit endeavor to raise money for the Brazilian charity Vocação, so at the very least, check out the free PDF version and think about contributing to a worthy cause. 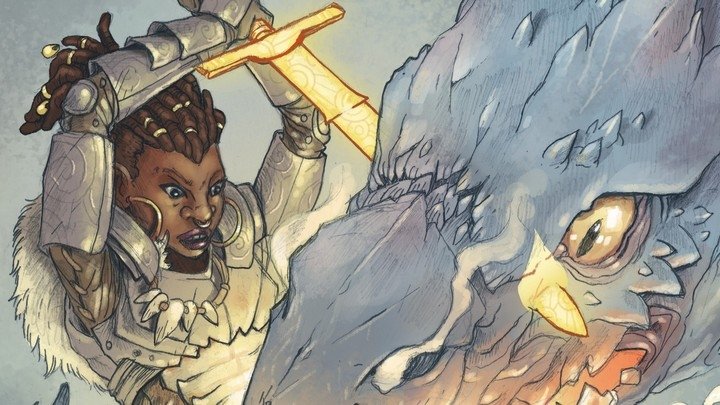