Of the many noteworthy games in this week's roundup, there can be only one highlight: Mr. Driller DrillLand, the inexplicable but long-overdue worldwide release of a game Jeremy has held near and dear for almost twenty years. Upon reflection, I was probably turned onto by Jeremy at some point, and I'm sure many of you are in the same boat, so pick it up if you like, try the eShop demo if you're not sure and if that's not enough... well, Klonoa Encore's up next, and if that doesn't scratch your itch then I wonder how you ever found your way here to begin with 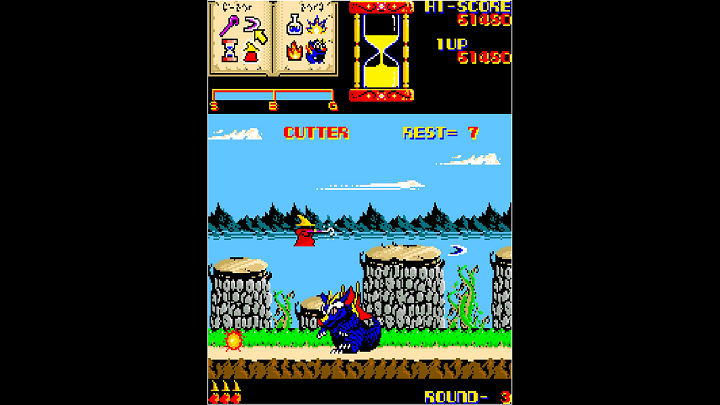 What's this? A side-scrolling action game starring a cute little wizard, developed by Seibu Kaihatsu and distributed by Taito in arcades, with an adaptation for MSX released by Sony the following year; players collect a variety of magic spells on a simple left-to-right journey across the land, sky and underground in the pursuit of a kidnapped princess.

Why should I care? As obscure as this game is, it's far and away the most well-known game from the early era of Seibu Kaihatsu, so if you're interested in sampling their pre-crosshair shooter, pre-Raiden output, Wiz is the game to start with... just don't hesitate to play it with the sound muted.

Useless fact: The dragon-like Miclus creature that appears as a hidden item in most Raiden games originates from Wiz — it's both a friendly summon and an end-boss.

What's this? An RPG-tinged overhead shooting-action game, originally released for Japanese feature phones in 2008; the eponymous Julia Miyamoto is an intergalactic temp worker dispatched to an uninhabited world to "clear out garbage", which she soon discovers to mean slaughtering indigenous life forms.

Why should I care? As with many of these G-Mode Archives games, they're most fondly remembered for their writing and kooky premises, so if you can't read the game's satirical and oddly melancholic plot then you're essentially left playing a highly-segmented, mission-based score-chaser with a fairly rudimentary charge-based game system, albeit one that was well-suited to its target hardware.

Useless fact: Mahou, the studio behind this game, is the descendent of the studio Home Data which developed such NES/Famicom games as Sqoon, Cosmic Epsilon and Tetra Star: The Fighter, as well as the unreleased arcade game Hermetica which was reworked by Bullet Proof Software and Nintendo to become Yoshi's Cookie.

What's this? A remaster of the last wholly original entry in Namco's quirky Columns-meets-Boulder-Dash action-puzzle game series Mr. Driller, originally released exclusively in Japan for the Nintendo Gamecube in 2002; aside from the new international localization, this version has been touched up and adjusted for HD and 16:9, with online leaderboards for the game's many modes and a new casual play option that lowers the difficulty of the entire game.

Why should I care? Even at its simplest, Mr. Driller has always straddled the line between a purely reflexive action game and a more considered arcade-style puzzle game, and this particular entry in the series is packed with divergent play modes along that entire spectrum — in short, this is the most feature-packed version of Mr. Driller out there, and it's the one that'll let you play in the exact manner you prefer. It's also a arcade-esque puzzle game from the era when arcade-esque puzzle games weren't relegated to budget digital marketplaces or mobile gacha, so it boasts a fully-voiced (in Japanese) story mode, a surprising breadth of live-performed, vocal-infused music and a lot of silly, superfluous and very charming extras.

Helpful tip: In the event that Jeremy can't will an international physical DrillLand release into existence, you may want to import the Japanese Switch version, titled Mr. Driller Encore, as it contains the full international localization on the card. (Europe's getting a retail release, too, but I believe it's a code-in-a-box deal.)

What's this? A high-adrenaline anti-gravity racing game based on the one fondly-remembered part of Star Wars Episode 1: The Phantom Menace; this game was originally released on Nintendo 64, Sega Dreamcast and PC, was somewhat unexpectedly reissued on PC a year or two ago with the requisite framerate and resolution bumps and has now arrived on consoles with up-res'd cutscenes, new controller configs and, on PS4, trophy support.

Why should I care? Episode 1 Racer is a rare example of an excellent licensed game based on criminally unfun source material, and the remaster allows the game to be precisely as fast and responsive as you remember it being (theoretically, anyway — see below).

Helpful tip  Early reports suggest these console ports are fraught with technical issues, particularly on Switch, so be warned. 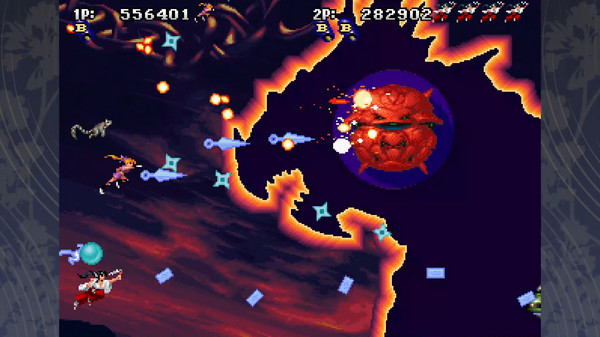 What's this? The horizontally-scrolling sequel to Psikyo's samurai-themed vertical shooting game Sengoku Ace, developed and distributed in arcades by Psikyo in 1996 and later ported to Sega Saturn, PlayStation 2, smartphones and Nintendo Switch; the Steam version is based on the recent Switch port and adds button mapping and online leaderboards, you know the drill.

Why should I care? Of the three horizontally-aligned Psikyo shooting games, this is the good one.

Useless fact: The third game in the trilogy, Sengoku Cannon, was much-reviled upon its original launch on PSP and got an even worse reception when it was recently reissued on Switch, but you better believe it's coming to PC soon nonetheless.

I have not played this game, I don't intend to play this remaster and I'm thoroughly uninterested in deciphering why this release has caused so much controversy, but I am curious to know whether any Retronauts regulars have fond memories, or indeed any memories, of this game, so here we are. Don't buy THQ Nordic games.

Putting aside the fact that most Build engine games are lucky to offer half an episode of compelling map design, is there a single one that hasn't been blighted by the odiousness of its creators? Is William Shatner's TekWar the last refuge of the decent? Don't buy Gearbox games.

It's exactly as it sounds: the original Kirby, colorized for the very first time. Yeah, I'm shocked it hadn't happened earlier, too.

Data Discs has returned with a pair of alien-themed Sega vinyl: one for Makoto Uchida's grisly sci-fi brawler Alien Storm (specifically, the Genesis version) and one for Treasure's apotheosis of hardcore Mega Drive action, Alien Soldier. Each soundtrack comes in three variants, but you may have a little trouble finding specific variants because, um, these went on sale last week and I forgot to mention it to all y'all, despite ordering one for myself, so they may be sold out. If it's any consolation, I'll probably forget to listen to it, too.