I expect some of you may feel a degree of ambivalence about the Neogeo Pocket Color Selection series — it's always neat to see obscure libraries given their due in the present, of course, but you might be thinking, are chibi-fied conversions of arcade fighting games the only thing this handheld has to offer? If that's the case, never fear: there are a couple of Metal Slug games, too. 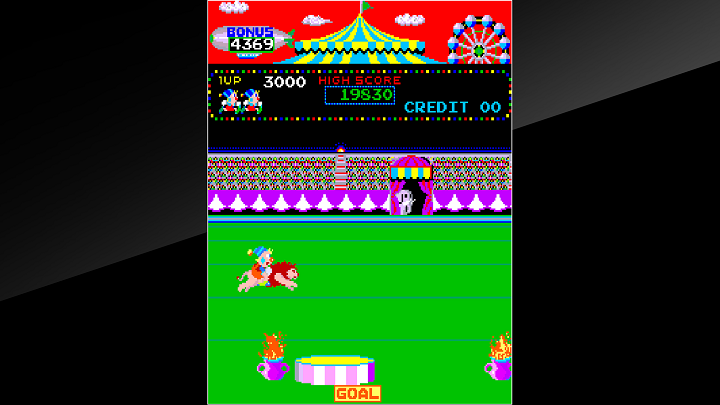 What's this? A circus-themed right-scrolling action game, developed and distributed in arcades by Konami in 1984 and ported to MSX, Commodore 64 and Famicom (and, by association, roughly eight zillion bootleg multi-carts); the game offer six-ish stages themed around tightrope walking, trapeze, acrobatics and more, with the goal being to score big and survive to the end.

Why should I care? While the basic action doesn't necessarily change a whole lot from stage to stage, the event-themed stages are relatively varied for a game of this vintage, and there are plenty of arcane scoring bonuses for those who appreciate rather than resent that specific type of reward.

Helpful tip: There were two versions of Circus Charlie in arcades, one that let you freely select each stage and one with more restrictions, but as of this writing I don't know which version(s) are included in this package... so, I suppose this tip isn't as helpful as it could be.

What's this? An atmospheric adventure-style game themed around Japanese seasonal festivals, originally released for Japanese feature phones in 2009; over the course of summer, fall, winter and spring, wander the festival site, partake in ten different festival-themed minigames including goldfish scooping, ring toss and more, and unlock extra diary entries by performing well at each event.

Why should I care? You're nostalgic for cultural pasttimes that you may or may not have actually experienced.

Useless fact: This game is the third in a series of mobile apps themed around nostalgic Japanese pasttimes, so if you like this one, strap yourself in for more.

What's this? A spooky adventure game in the Chunsoft "sound novel" vein, adapted from web game to mobile phones in 2007; the player adopts the role of a 26-year-old office lady whose fiance is suddenly admitted to a mysterious hospital, with their reactions and choices pushing the story down one of several paths. ("Senbazuru" is the Japanese word for the custom of folding a thousand paper cranes as a gesture of well-wishes or affection or in the pursuit of good fortune, but is also sometimes used as a metaphor for the desperate pursuit of the intangible. Spoopy~~~)

Why should I care? You can read Japanese, for one. Beyond that, no clue, but there are a bunch of these games so I can only assume they're at least mildly interesting.

Useless fact: G-MODE's announced a few more Archives games in advance and it seems they're going hard on horror games this month.

What's this? The Neogeo Pocket Color's second and final KOF game, released in early 1999; loosely based on both The King of Fighters '98 and the monochrome NGPC launch title King of Fighters R-1, this colorized version includes super-deformed versions of 15 characters (and a dozen unlockable variants) and a handful of new modes over its predecessor, including a training mode and a "make mode" which lets you unlock hundreds of silly modifiers for your characters. (The original NGPC version required one to link to the Dreamcast version of KOF98 in order to unlock all the skills; that functionality is obviously no longer present in this version, but I can't say whether Code Mystics has made those skills available in some other fashion.)

Why should I care? This'll probably be the only NGPC reissue that'll let you play as Shingo, and if you can tolerate (or, gasp, enjoy) the grind, there are a lot of really wacky skills to unlock, including a famous super from a certain Capcom boss character.

Helpful tip: Make Mode's skills are separated into different tiers of rarity, and if memory serves correct, playing on the hard difficulty will increase the drop percentage of the rarest tier of skills and vice versa.

What's this? The Neogeo Pocket Color's second and final Samurai Shodown game, originally released in late 1998 and more recently given away as part of a promotion for the Switch port of the new Samsho; much like KOF R-2, Samsho! 2 is built on the foundation of the earlier monochrome game Samurai Shodown! (itself somewhat based on Samsho IV) but with a cast of characters that were largely derived from the 3D gaiden series being pushed for the Hyper Neo Geo 64.

Why should I care? This is the only place to experience most of the Samurai Shodown 64 series cast in 2D (or at all, for the most part, given the extremely unlikelihood of a future Hyper Neo Geo 64 reissue initiative.)

Useless fact: Note the exclamation point in the title, as it's the one tiny tell that the NGPC games were originals and not conversions. 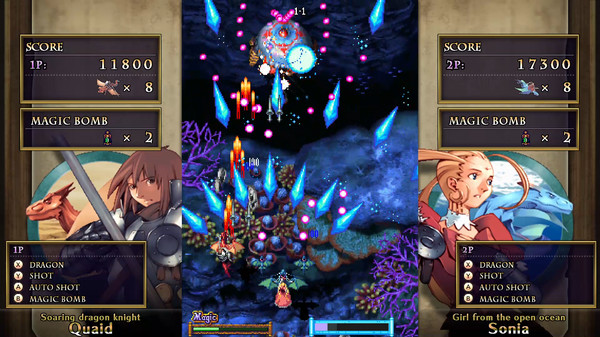 What's this? Psikyo's final 2D shooting game, released in arcades in late 2000, with a PlayStation 2 port produced a few years later; this fantasy-themed game differentiates itself from other vertically-scrolling Psikyo games by virtue of the fact that the player-character is riding atop a dragon that can be dismounted in an option-like manner, with different movement speed and attack types depending on whether the two characters are separated or together. (As per usual, this version's based on the recent Switch port with the addition of button remapping and online leaderboards.)

Why should I care? You've been enjoying the recent wave of Psikyo PC releases and you want to cap them off with Psikyo's most technical and exacting game.

Useless fact: City Connection is, for the moment, done with porting the Psikyo catalog to PC, with only the brick-breaker/pinball/shooter hybrid Gunbarich and the barely-functional "minus" conversion of the 3D omnidirectional shooter Zero Gunner 2 missing from their recent run of Switch ports. (By the way, they released Sol Divide on PC the other day and I neglected to mention it because I forgot it was coming, on account of it's Sol Divide and most people tend not to remember it.) 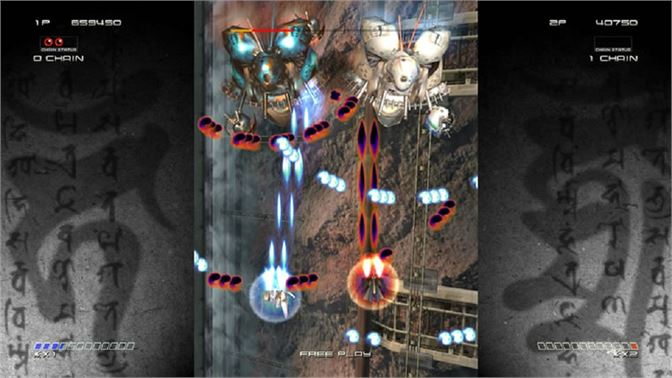 If you've somehow managed to avoid buying Treasure's influential and critically-lauded color-swapping bullet hell game Ikaruga at any point over the last nigh-on-twenty years, here's your chance to nab it for X360 or XB1 for the low, low price of nothing — just visit the link above while logged in and don't change the region of the page and you should be able to claim it no problem. 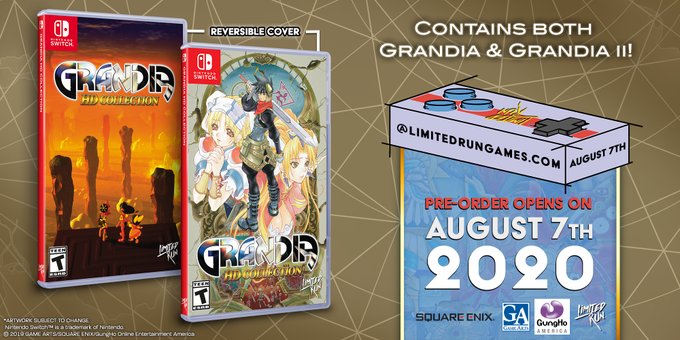 LRG's listing isn't up so I can't tell you how much it'll cost or precisely how many knick-knacks have been tacked onto the inevitable collectors' edition but if you'd like two own one great remaster of two above-average turn-of-the-millennium JRPGs then get your order in from tomorrow. 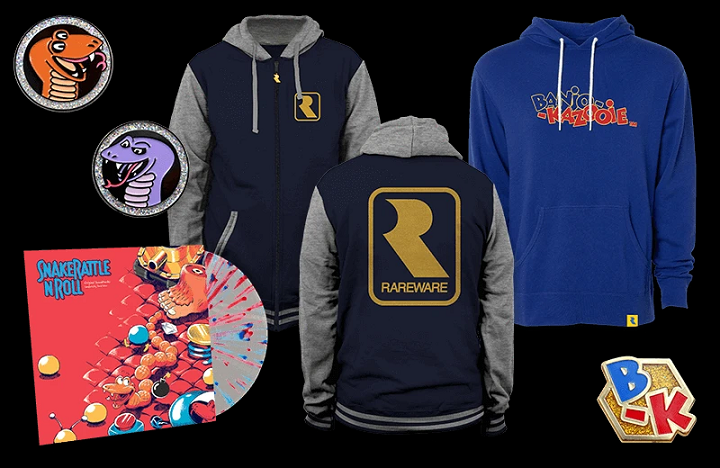 Fangamer's surprisingly wide array of Rare merch has grown even wider this week, with several new additions including Rareware and Banjo-Kazooie hoodies and a vinyl soundtrack featuring the NES and Mega Drive tunes from Snake Rattle & Roll, a game for which I'd admittedly be hard pressed to recall a single song, but for their occasional faults, Rare's weakness was certainly never their music. 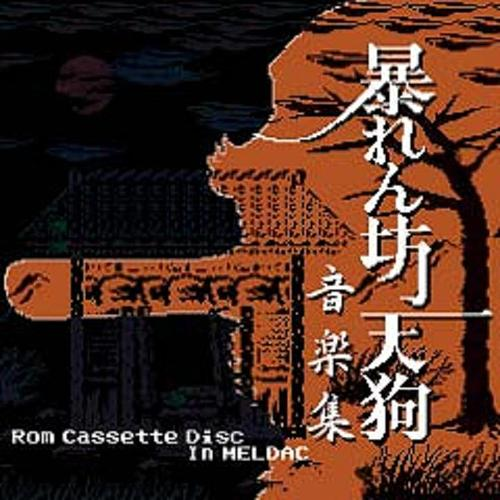 Fresh on the heels of a teaser for what's undoubtedly a reissue of the quirky Famicom shooting game Abarenbou Tengu (Zombie Nation) comes a reprint of the compilation soundtrack derived from the works of obscure publisher Meldac, featuring tunes from Tengu and both Tenjin Kaisen Game Boy games (the first of which you probably know as Mercenary Force) as well as Jeremy's beloved Game Boy conversion of Heiankyo Alien, including the relatively unheard "Multi Matrix" tunes arranged specifically for link cable play. 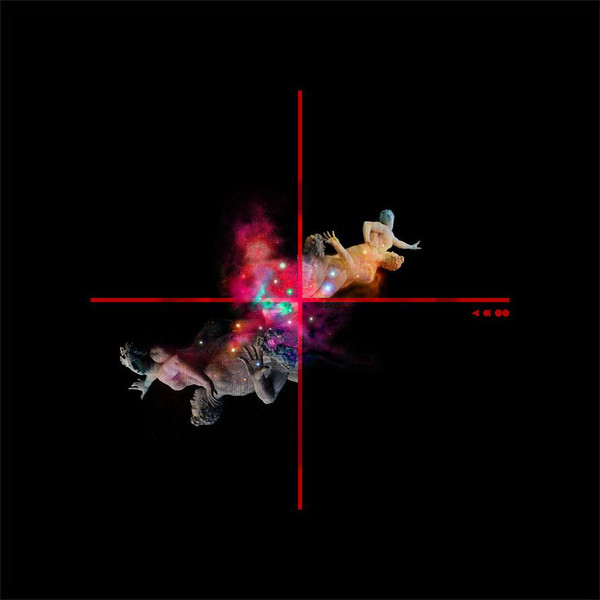 Several of Square USA's constantly-out-of-stock vinyl is currently and temporarily back in stock, including the Chrono Trigger/Cross and Xenogears arrange albums and the Nier Automata OST.