An addendum to today's article description, dear readers: please note that the Game Gear Micro is not classified as "mini" hardware and is therefore exempted from any and all criticism you might feel compelled to level against it at this time. (Trust me, you'll have plenty more to complain about next week.) 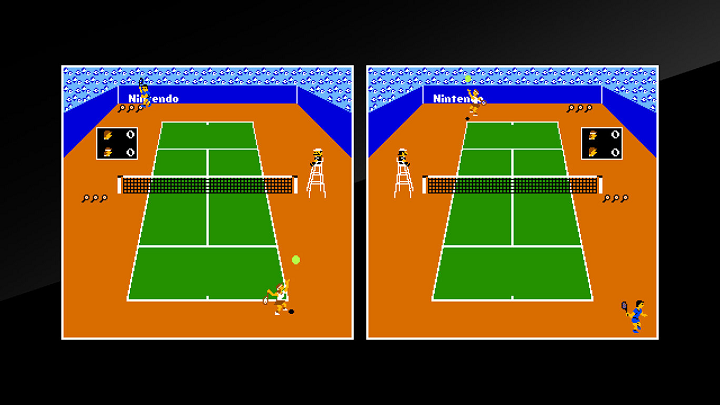 What's this? The dual-screen Vs. System arcade version of Nintendo's black-box NES tennis game, originally released in 1984; this version expands over the home original with female player-character options and support for versus and/or doubles multiplayer for up to four players, with each player/team given their own screen.

Why should I care? In case you forgot, NES Tennis didn't include a two-player singles mode and the Game Boy adaptation didn't include a four-player doubles option, so this version offers all the options you may have wished or expected those versions to have back in the day.

Helpful tip: Vs. Tennis supports two-player and four-player multiplayer configurations, but not three-player. 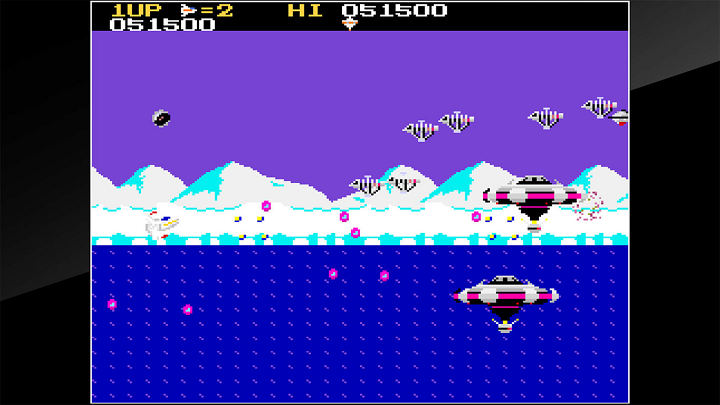 What's this? A horizontally-scrolling shooting game with a sorta-Antarctic setting, developed and distributed in arcade by Sunsoft in 1983; moving the player-ship up or down tilts the angle of the ship, altering the trajectory of your shots and allowing you to hit the enemies from all points on the screen.

Why should I care? You'd like to try one of the rare horizontal takes on Xevious, or you're just part of the massive majority of people who have no real experience with Sunsoft's arcade catalog.

Helpful tip: Sony's been all over the place with AC lately, in case you hadn't noticed, so if this doesn't actually show up today, I don't know what to tell ya.

What's this? The latest "one game for everyone, a handful of games for a select few" NSO update, featuring the final game in the classic DKC trilogy, the lesser of the SNES' two overhead firefighting action games, a story-centric post-apocalyptic fighting game, an intriguing point-and-click/brawler hybrid and the surprise re-emergence of a seminal figure in the anime-lady-sidescroller subgenre. (Japanese NSO users will have further access to a few additional games: the SFC Kunio-kun dodgeball game, Sunsoft's 4-player party brawler Sugoi Hebereke and the FCDS version of Konami Ping Pong.)

Why should I care? You weren't ever tuff e nuff to endure the ridicule that might come with picking Tuff E Nuff off a retail shelf in 199X.

Useless fact: Super Valis IV's shock appearance on NSO is the first step in a Valis 35th anniversary initiative from the series' new owner Edia, who purchased the Nihon Telenet catalog from City Connection earlier this year (who, in turn, purchased it from Sunsoft a few years ago).

What's this? A playable miniaturized Astro City cabinet pre-loaded with 37 late-'80s/early-'90s arcade games, produced by Sega Toys and released exclusively in Japan, with a wider Asian released planned for the coming weeks. The Mini can be played on its own LCD screen or on a TV or monitor via HDMI out, either using the embedded stick and six-button configuration or an external Astro City Mini controller or arcade stick (connected via USB, sold separately); the software suite includes language settings for the front-end, save states, screen filters and border options, a looping BGM mode with tunes from select games and all-new menu music by Sega legend Hiroshi "Hiro." Kawaguchi.

Why should I care? For as prolific as Sega has been about re-releasing arcade games from this era, they've managed to pack quite a few never-before-ported titles into this device, including a lot of games that differ substantially from the console conversions you may be familiar with, and the presentation on all fronts — software quality, playability on- and off-TV and physical design of both the Mini itself and the controllers— looks to have established a new standard for this specific type of miniature cabinet. (For the record, we still don't know precisely who handled the emulation for this unit, just that it wasn't M2, but whoever it was seems to have done an admirable job.)

Helpful tip: For those who like to accessorize, there's a ton of Mini-specific add-ons available, much of which is retailer- and/or pre-order-exclusive; the general-purchase accessories include a limited-edition pink-button variant (bundled with either two controllers or a stick), a "Game Center Style Kit" which adds a coin base and other flourishes to the mini cabinet, a deluxe pack with even more accessories including a replica Sega Hi Tech Land ashtray, and an Astro City Mini soundtrack featuring the newly-written menu music and new arranges by several classic Sega arcade composers.

What's this? A no-frills collection of the three Game Boy entries in Square-Enix's long-running series of idiosyncratic RPGs, SaGa. This collection offers ever-so-slightly-modified versions of both the original Japanese games and the versions originally localised under the name Final Fantasy Legend, with an optional high-speed setting, an extremely basic suite of screen/border options and the ability to play the game using virtual buttons on the Switch's touch screen, including in vertical mode (but only one way, Flip Grippers, and not the way you're hoping for).

Why should I care? SaGa has long been notorious for being a deliberately hostile and confusing series but the Game Boy games, curtailed as they were by the limitations of the original hardware, are as straightforward an entrypoint into the series as you're ever going to find, and remain so in spite of this collection's utter dearth of any substantial enhancements, features or aides. (The games do retain regular-speed audio in fast-forward mode, though, which ought to be far more common.) 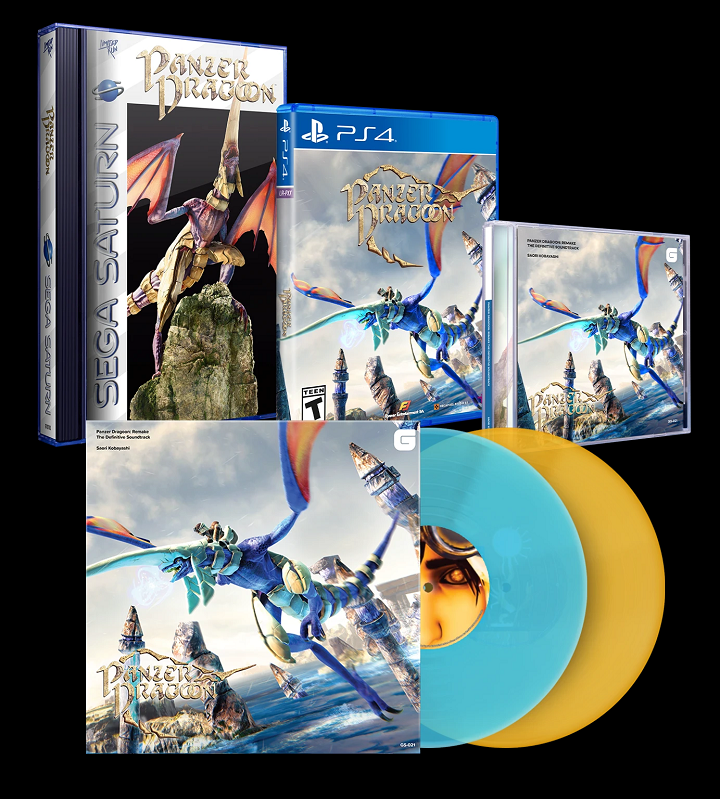 No, this isn't deja vu — the last LRG Panzer Dragoon release was for the Switch version, and this one's for the PS4 version (and, thankfully, comes after quite a few necessary patches which brought the remake to the brink of adequacy). The vinyl's new, however, and Saori Kobayashi's arrangements required no patching (unless you want to count the fact that they literally had to be patched into the game, in which case, ya got me.) 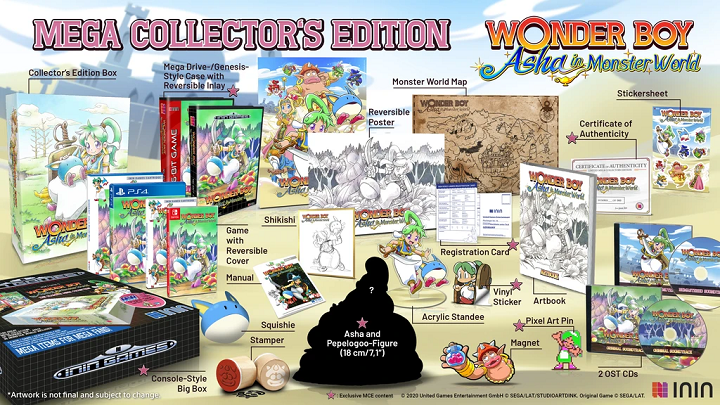 The sudden announcement of the polygonal Monster World IV remake, currently in development in collaboration with several of the primary original developers, caught many people by surprise, with further surprise caused by the somewhat unflattering reveal footage, but should you have faith in those former Westone veterans to deliver something befitting the Monster World name, you can now pre-order one of several very extravagant collectors' packages... and, in the event that the game doesn't meet your expectations, you can take solace in the fact that it comes with the original Mega Drive version as well, so it's no great loss.

We unwrap (and unpack) Evangelion on Episode 189