The headliner for today's packed roundup has to be Capcom Arcade Cabinet, a variety pack of nearly three dozen arcade games, many of which have never been ported to home consoles before (Progear, 19XX), have not been adequately ported during the modern era (Cyberbots, Giga Wing, Forgotten Worlds) or are just comforting to have on hand at all times (Ghouls 'n Ghosts). If they fixed the frame skipping, uneven screen scaling and monstrous input lag, they might really be onto somethin'. 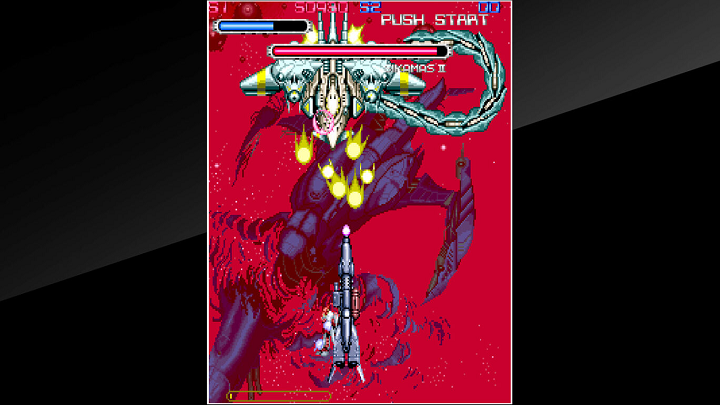 What's this? A mostly-vertically-scrolling shooting game with a heavily Gundam-influenced mecha aesthetic, developed and distributed in arcades by Jaleco in 1993 and reissued for the first time today; Cybattler's c stages are designed to force the player to maximize the use of their mech's close-range sword attack and manually-aimed eight-directional shot.

Why should I care? It might take a minute to acclimatize to Cybattler's controls, but the game's cinematic stages and demanding-but-not-rote design offer a lot to those who are willing to make the adjustment.

Useless fact: Cybattler's player-mecha "Blanche" recently appeared as a DLC ship in the City Connection-published Psyvariar remaster, primarily due to the similarity of the two games' names.

Why should I care? This version of Sorcerian includes a lot of features like auto-battling in order to make it a more comfortable experience for the feature phones of 15 years ago that are at least curious to observe nowadays, and while the new graphics led to some reduction in character customization, they aren't without their charm.

Useless fact: The two additional scenario packs included with this release are ports of official expansions developed by Falcom back in the day, and those particular expansions somehow managed to never be reissued or adapted for any other of the many console and PC-based Sorcerian conversions produced before or after this mobile remake.

SNK Vs. Capcom: The Match of the Millennium

What's this? The sole handheld fighting game entry in SNK and Capcom's turn-of-the-millennium collaboration, originally developed and published by SNK for the Neo Geo Pocket Color at the very tail end of 1999; this game includes 26 playable Capcom and SNK characters (8 of whom must be unlocked) and allows for 1v1, 2v2 tag or 3v3 team play, with a bevy of single-player modes, unlockable special moves for each character and even an "olympic mode" packed with Capcom and SNK-themed minigames. (Two-player local multiplayer is available, but the link cable features that allowed the game to accrue points by linking to other NGPC and Dreamcast games have not been recreated.)

Why should I care? This is unquestionably the most enjoyable and most robust of SNK's impressive roster of Neo Geo Pocket fighting games and arguably the most festive of any of the SNK/Capcom crossover games, and it's not something people necessarily expected to ever be reissued due to some unspoken but inferred issues between the two companies — if you only ever buy one of these games, make it this one.

Helpful tip: SNK just announced there's a physical Neo Geo Pocket Color Selection compilation in the works, if you'd rather wait for that.

What's this? NOT EARTHBOUND AND I WON'T STAND FO—uh, a rare in-name-only sequel to Solomon's Key, the least aesthetically offensive of the euro-caveman platformer menagerie, a surrealistic Super Famicom action-platformer that was a near-miss for localization in its day, and one of the handful of awful RPG-tinged fighting games that graced the 16-bit library. (Japan's NSO app got Shin Megami Tensei II over Doomsday Warriors, if that makes you feel any better.)

Why should I care? I've said it before and I've said it again: funneling people towards games they would never otherwise elect to play, and probably not even enjoy, is genuinely the greatest service this flimsy excuse for a yearly subscription fee can provide.

Useless fact: Prehistorik came back in 2013, and thankfully, it very quickly went away again.

What's this? A 32-game collection of pre-CPS, CPS-1 and CPS-2 Capcom arcade games, many of which have never been reissued on consoles; the games are presented via a virtual, customizable 3D arcade front-end and are endowed with save states, online leaderboards, extensive button mapping options, various screen and scanline settings, a rewind feature and game speed settings, dip switches, Japanese/English ROM toggles for most games,among other features.

Which games are included? The free download includes 1943, and if you download within the first week, you'll also get Ghosts 'n Goblins for free (or you can buy it later for an indeterminate price). Beyond that, games are available to purchase in packs of 10:

Why should I care? For as ubiquitous as Capcom's '90s-era arcade catalog may seem, there are quite a few sought-after games available as part of pack #3 in particular, as well as a lot of games that have not been reissued in their authentic arcade form in over fifteen years, so despite some overlap with certain other recent Capcom compilations, this collection offers plenty of games worth acquainting or reacquainting yourself with, and while the package certainly has some very immediate technical issues, they are at least attempting to go above and beyond the typical feature suite. (This collection is a timed Switch exclusive and will be coming to PS4, XB1 and PC in a few months, so my hope is that they will at least fix this version by the time the others show up... or maybe they'll all be busted, what do I know.)

Useless fact: This collection is not only partially built around MAME but it actually credits the developers, which is a big step in the direction of high-profile publishers ethically embracing resources they could and should have been bolstering for roughly two decades.(Who's actually doing the work on the collection is less clear: there are many studios that have unspecified credits, and M2 confirmed their involvement began and ended with sourcing certain material and not to the emulation, so...)

Another month, another Mobirix conversion of a Psikyo game... but, much like the recent Gunbird Classic, and unlike a lot of their previous conversions, this is a somewhat faithful attempt at bringing the original game to smartphones,and not a f2p monster wearing another game's skin. (Yes, that is their official trailer.) 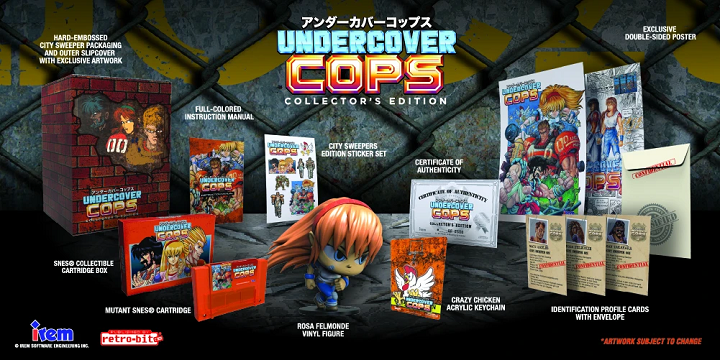 Much like today's NSO highlight, Psycho Dream, this port of Irem's erstwhile arcade brawler came perilously close to being published overseas but was ultimately released only on the Super Famicom; much unlike Psycho Dream, which could be found in bargain bins everywhere, Undercover Cops' SFC release was extremely scarce and quickly began to command exorbitant prices, so this new, licensed and freshly-translated reissue may be the only opportunity most people ever get to own a somewhat legitimate copy of the game. (It is also, to my knowledge, the first time anyone anywhere will be able to purchase an official Rosa figurine.)