Good news, witch maniacs: Cotton Reboot! is just one of three Cotton-related anniversary releases scheduled for this year, the other two being a compilation that contains ports of three Success games including Cotton 2 and Cotton Boomerang, as well as Cotton Rock'n Roll!, the first brand-new Cotton game in decades... and you can also play as Cotton in either of the last two Umihara Kawase games, and even Success' completely ignored falling-block puzzle game KASIORI. You wanted Cotton, so they gave ya the whole spool. 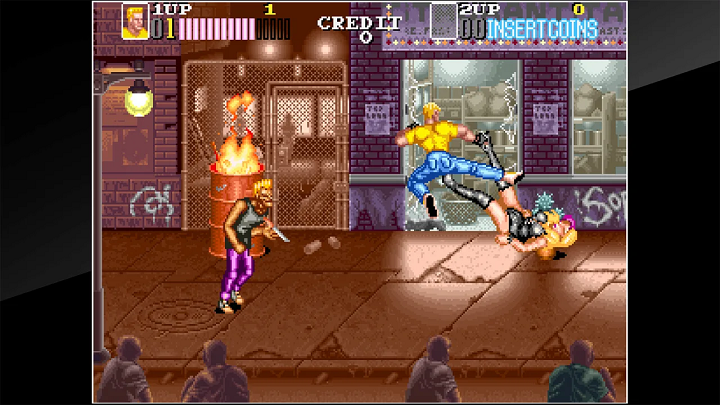 What's this? The second entry in Konami's very loose trilogy of urban brawlers, originally distributed in arcades in 1991 and never reissued until now; this version builds upon the Double Dragon-and-then-some design of the first game with four distinct characters, collectible health items, a ton of new enemies, more environmental interaction and larger, more detailed sprites that bring it a little closer to the standard set by the Capcom brawlers of the day. (This package includes both the two-player and four-player variants of Vendetta as well as the two- and four-player variants of the corresponding Japanese version, Crime Fighters 2.)

Why should I care? Vendetta arguably represents the apex of Konami's arcade brawler output: it's tough without feeling gratuitously unfair, and it offers the most refined take on a lot of Konami's signature mechanical minutiae, many of which disappeared from later games as they hewed closer to the Final Fight template.

Useless fact: The Arcade Archives version of Crime Fighters 2 has been modified to exclude a few of the original game's more questionable enemies, including one that might very well be the most offensive homosexual caricature of any '90s brawler (of which there are, sadly, quite a few).

What's this? The final main-line game in G-MODE's trilogy of all-female beach volleyball games, originally released for Japanese feature phones in 2009; this entry brings back all the characters from the first two entries on top of a few new ones, adds new combination moves for each pair and more control over your partner, a world tour mode that lets you freely assemble your own teams and, most importantly, more costumes per character and the most in-depth tan line simulations yet.

Why should I care? Who am I kidding: you watched the trailer, you already know why you should or shouldn't care. (For what it's worth, these games do play reasonably well, too.)

Useless fact: This might be the final main-line entry in the series, but as you're about to see, there was one other mobile entry...

Why should I care? You want the cheesecake without the pointless filler of game mechanics or character interaction.

Useless fact: There is yet another spin-off game in this series, but it was made for Flash devices and is therefore exempt from G-MODE Archives. Oh well.

What's this? A dual port and HD remake of the original entry in Success' cult shooting game series starring the cute witch Cotton, originally released in arcades via Sega's 16B arcade board and subsequently ported and converted to a variety of platforms, with the most recent reissue being the Astro City Mini. The standard mode of Cotton Reboot is specifically based on the Sharp X68000 version of the original game, which has long been considered a director's cut of sorts, while the arrange mode has been remade and reconfigured for 16:9 widescreen and features brand-new high-resolution 2D visuals, a new modern scoring system, an arranged soundtrack by an all-star assortment of game composers and voice-acted characters and cutscenes (as well as some additional playable characters that may or may not be available from day one).

Why should I care? Cotton's eccentric anime-style tone and unapologetic focus on character not only set it apart from other shooting games in its day but opened the door for other shooting games to deviate from well-worn sci-fi and military cliches, and this release represents the first time any game in the series has been widely available outside of Japan; as for the game itself, the original game remains a charming and moderately challenging experience and the new HD arrange is not only tuned for score-attack but is balanced in a way that guarantees even the most casual of players will be able to see it through.

Useless fact: The Japanese vintage game store BEEP, who funded and co-ordinated the development of Reboot!, initially announced a reissue of Cotton X68000 for authentic hardware, but the pandemic seems to have waylaid their plans...

After years of teasing on social media, Japanese homebrew developer LITTLE SOUNDS has finally released not just one but both of his ongoing original Famicom game projects: F-THETA, an overhead racing game that boasts a rotating track effect and full-screen interstitial animations, as well as Utakata Synopsis, which adapts that same animation tech to a traditional command-based adventure game, based on an old video animation that the author has coupled with the game on DVD. Both games are currently being produced by hand on a first-come, first-served basis, so they may not be available at the above store at any given moment, but the developer does intend to keep them in stock, both via co-operating distributors and, eventually, direct from the source. (Two words of note: one, the games may be even raunchier than the commercials suggest, so brace yourself; and two, F-THETA's scaling effect is much faster and less corrupted than that VHS-style trailer might have you believe.)