I really do hope Square's managed to deliver with the Final Fantasy Pixel Remasters, dear readers — not just because the players deserve better than the last decade or so of embarrassing remasters, of course, because I'd also love for them to stop tinkering with their old games for just one goddamned minute. 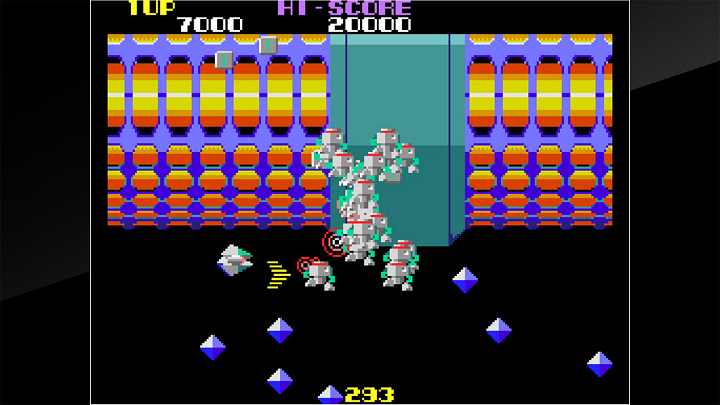 What's this? A wave-based omnidirectional shooting game, developed and distributed in arcades by UPL in 1984 and reissued for the first time on PlayStation 4 in 2014; the player is tasked with destroying enemies that advance in set waves and patterns from all directions in a manner not entirely dissimilar to Eugene Jarvis' Robotron 2084, minus the dual sticks and plus a button that allows you to lock the firing direction of your ship.

Why should I care? You'd like to sample a Japanese homage to one of the classics of American arcade gaming, with the full understanding that it's not nearly as fun. (NOVA2001's creator, future Wonder Boy/Monster World series papa Ryuichi Nishizawa, fully admits he was biting Robotron 2084.)

Useless fact: One could infer a connection between NOVA2001 and the Pokemon Parasect from this NOVA2001 fan art, drawn by Ken Sugimori in an early issue of the independent Game Freak magazine.

What's this? A "channel-switching RPG" with dark undertones, developed by Seekz and released for Japanese smartphones by G-MODE in 2008, with a quickly-delisted to Nintendo's DSiWare service in 2010. Set in the futuristic Sunlight City, players control 4 characters on the search for something they've each lost — their memories, their shadow, their identity — and how their fates are intertwined with the mysterious radio DJ "Sepas-chan"; one of the game's notable mechanical features is the "channel" system, which allows you to switch between characters/parties when they are separated, both in and out of battle.

Why should I care? Of all the G-MODE Archives releases so far, this one seemed to generate a ton of buzz in certain circles, and after playing it, I can see why — the game's written with the same aloof, slightly pensive bite as a MOTHER or MOON, and of all the games I've discovered via this reissue label, it's by far the one I can see finding a broader audience outside of Japan, so I'm glad it's made its way to PC so that it can be more easily translated by volunteers.

Useless fact: Perhaps spurred by the reception to this reissue, G-MODE is once again collaborating with Sepas Channel creator Osakana Koda on the upcoming indie game OU, made in partnership with Unreal Life creator room6.

What's this? Kibukawa game the fifth, originally released for Japanese feature phones in the mid-2000s; in this entry, a friend of the traditional series protagonist decides to investigate an urban legend surrounding a haunted elevator and becomes embroiled in a genuine tragedy.

Why should I care? Once again, these games are dropping so quickly that I'm completely unable to keep up, and I'm not confident people are reading these write-ups anyhow.

Useless fact: Renji Mirokuin, the aforementioned friend introduced in this game, is one of the series' more popular characters — he's one of those "extremely lucky dudes who are oblivious to the danger that constantly surrounds them"-type characters, apparently.

What're these? ClayFighter's forgotten side-scroller sibling, the global debut of a formerly Europe-exclusive platformer from Probe Software and a conversion of an overhead (or isometric, whichever you prefer) puzzle game originally released for European microcomputers, as well as a Mario 3 save state that puts you at the final world with a bunch of lives and items. (Japan's NSO update: Bombuzal, the Japanese version of Tuff E Nuff and the highly-requested precursor to Persona, Shin Megami Tensei: if...)

Why should I care? I say we should all continue whining about Earthbound. Eight-hundred-and-nineteenth-time's the charm, eh?

Useless fact: Bombuzal is notable in Japan for two reasons: firstly, it was the first third-party game for the Super Famicom, and secondly, one of the stages is bugged and cannot be cleared by normal means, and rather than fix it, publisher Kemco instead obfuscated the problem by disguising it as a promotion in which players could send in a postcard pointing out the unbeatable stage in order to win a prize

What's this? A port of the most recent arcade revision of Dariusburst, the latest entry in Taito's venerable series of horizontally-scrolling shooting games, originally released for PlayStation Portable in 2009 and subsequently revised in arcades and across smartphones, PlayStation 4, PlayStation Vita and PC across several years. This port, initially released earlier in the year as part of the Darius Cozmic Revelation double-pack, faithfully recreates the 2011 version of the arcade game, ultra-wide 32:9 aspect ratio and all, and also implements several unreleased events that were never available in arcades due to the arcade version's premature termination, complete with new music, on top of replay sharing and ghost data.

Why should I care? Dariusburst Another Chronicle was the last of the dinosaurs — a luxurious, high-spec arcade release in an era where both the shooting game genre and arcades in general were said to be on the path of inexorable decline — and it demands to be commemorated, not just due to its engaging and heavily refined kamehameha-esque "burst" system, cleverly-designed multiplayer, gargantuan bosses and hours of phenomenal music but because the newly-implemented content (which includes an array of score-attack, time-attack, boss rush and marathon routes) scratches certain itches that dedicated players have had for many years. (Just don't even try to play it in handheld mode on Switch.)

Helpful tip: You may be wondering how this version differs from Dariusburst Chronicle Saviors, which has been available on PS4, Vita and PC for several years, so let me break it down: this version is directly and solely based on the original arcade version with added implementation of authentic unreleased arcade-centric content, whereas the focus of Chronicle Saviors is its original CS Mode, which has been adjusted for a standard 16:9 display and boasts a massive amount of missions based primarily on remixed content from the arcade game, as well as paid crossover DLC featuring ships and music from Taito, Capcom, Sega, Cave and Raizing games. I'd argue that Chronicle Saviors' CS Mode is an egregious case of quantity over quality and that the specific restrictions placed on the DLC ships renders them less fun than they could've been, but content is content, and those with no reverence for the authentic arcade experience or desire to compete for scores are probably going to appreciate the 16:9 option over all else. (For what it's worth, Chronicle Saviors does feature an arcade mode that's missing some stuff but will probably satisfy most people.)

What're these? The latest in a long string of retouched ports of the first two Final Fantasy games, as well as the first-ever 2D remake of Final Fantasy III, which before now had only ever been released internationally in 3D form; these versions have completely replaced the previous, widely-criticized versions and promise yet another visual re-interpretation headed up by original dotter Kazuko Shibuya that aims to more closely reflect the illustrations of designer Yoshitaka Amano in pixel art form, as well as newly-arranged music overseen by classic composer Nobuo Uematsu and other features like auto-battle, a bestiary, a music player and a controversial new high-definition UI. (Each of these games is $20% off for a limited time; no, I don't know if or when they're coming to consoles.)

Why should I care? I'm not nearly enough of a Final Fantasy nut to be able to tell you from exactly which prior ports these remasters are derived, whether they contain the additions or tweaks from versions xyz or whether they function as they should (not always a given with recent FF ports, unfortunately). What I can tell you is that I'm morbidly fascinated by Square's insistence on routinely contorting these games into whatever form they believe the current market will find most palatable — irrespective of whether they have any real gauge of what people do or don't want from legacy reissues like these, they're providing a living document in the ever-evolving fads of best and/or worst practices for the curation of pixel art games, and that's a valid service in and of itself.

Released several months ago on iOS, this app — powered by Project EGG, the decades-old Japanese legacy games service for PC — offers a library of dozens of 8-bit games across NES/Famicom, MSX and Game Gear, from EGG's own catalog of Compile games to licensed games from typical cohorts like Data East and Jaleco to deeper cuts like Athena and even modern homebrew titles. The services offers a small handful of free and free-with-ads games (including NES Zanac as a permanent free title), with the full library and feature suite, which includes save states, replay sharing, achievements, online play and more, locked behind a $3.99/month subscription fee. (The price on Android is a little lower due to some missing features over the iOS version; those features will be added eventually, and those who start subscribing at the lower price will be grandfathered into that rate even post-update.) 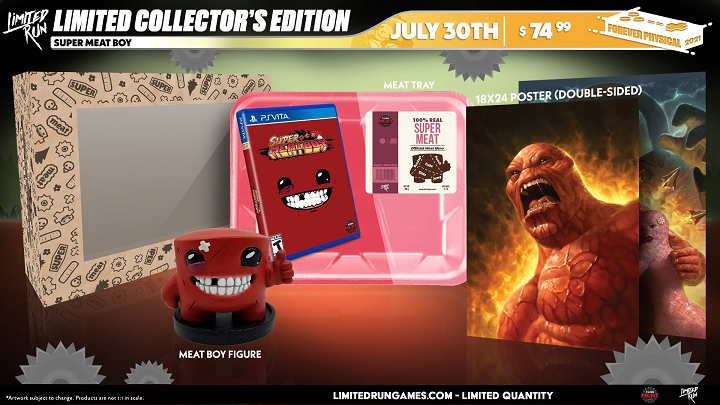 Two points of note about this print of the now-classic checkpoint platformer: firstly, it does not include the original Danny Baronowsky soundtrack and probably never will ever again, and secondly, the Switch version has a two-player race mode that is, to my knowledge, still exclusive to that version, and thus won't be present on any of these physical copies. Oh, and the Vita version's going to sell out in approximately eight nanosecond, but y'all know how it be. 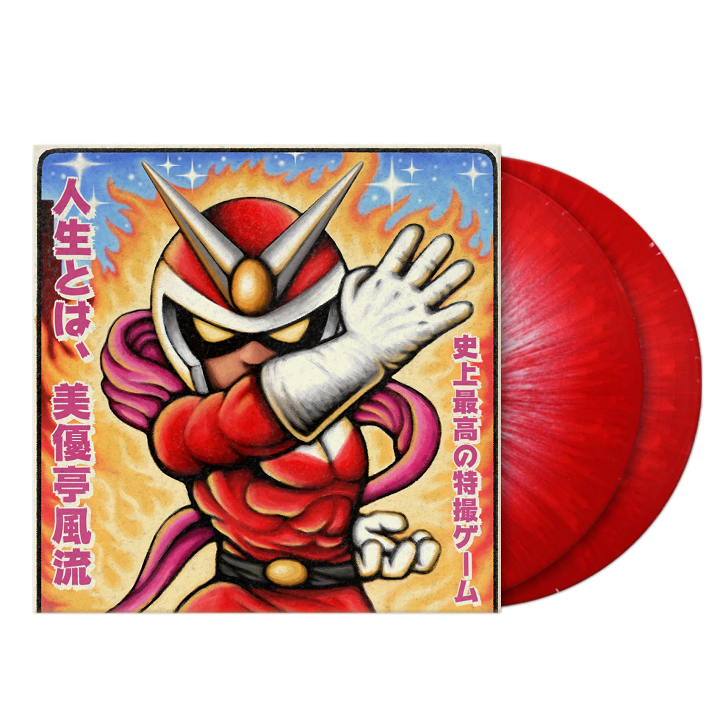 Ya gotta start selling these things earlier in the week, StS.