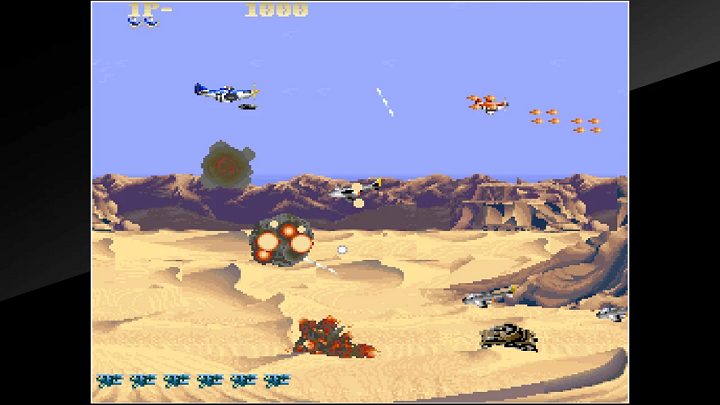 What's this? A US military-themed side-scrolling shooting game, developed by NMK and distributed in arcades by UPL in 1990, with a Mega Drive conversion retitled Fire Mustang released by Taito the following year; the systems are utterly conventional in theory, but as with a lot of later NMK games, the oddities of the particulars will emerge with repeated play (usually to kill or disadvantage you in a very silly way).

Why should I care? You want the stoic charm of P-47 but with the infuriating jank of Hacha Mecha Fighter, and you have an extreme tolerance for strobing bullets.

Useless fact: For many years, this game's (quite catchy) music was not supported by MAME, and so players would often play a bootleg version that was configured to use the audio hardware from Seibu Kaihatsu's Raiden, complete with stolen Raiden music.

El Shaddai: ASCENSION OF THE METATRON

What's this? A visually-arresting third-person action/platformer very loosely themed after the Book of Enoch, originally released by Ignition Entertainment for Xbox 360 and PlayStation 3 in 2011 under extremely strained circumstances: in short, the publisher was bought and the development team disbanded several months before the game was due to be released, and was completed by a skeleton crew who were forced to cut out significant chunks of the game that they were no longer able to finish making. Now under the ownership of director Sawaki Takeyasu after a protracted IP acquisition process, this PC port has been produced by one of the old programmers and is essentially just the console game running on PC, albeit with an expanded and translated version of the post-game novel that serves to illuminate players on what might've been.

Why should I care? El Shaddai is a game that had the potential to be fantastic but, as it currently exists, merely looks cool while offering very little to do before it ends; even if remains as-is forevermore, it ought to be re-circulated as a reminder of how dull most games still look in comparison, but the sales of this re-release may end up directly funding the addition and completion of the game's excised content, or even a sequel, so there's one more excuse to double-dip, should you demand it.

What's this? A double-pack containing ever-so-slightly-remastered ports of two PlayStation 2-era Nippon Ichi strategy-RPGs: Phantom Brave, originally released in 2004 and subsequently ported and expanded for Wii, PlayStation Portable and PC, and Soul Nomad and the World Eaters, originally released in 2007 and never ported until now. Each game is presented with upscaled graphics, higher-quality music and the inclusion of DLC where applicable.

Why should I care? I've never been able to answer this question as it pertains to NIS SRPGs and I never will.

Helpful tip: Phantom Brave's been on PC for a minute, but Soul Nomad was freshly listed on Steam alongside this Switch compilation.

What's this? A side-scrolling run-and-gun with a slight exploratory bent and an each-life-is-a-different-character gimmick, originally developed and published by Mommy's Best Games for the Xbox Live Indie Games service in 2008; this remaster offer upscaled graphical assets with support to up to 4K resolutions, adjustments for widescreen and several adjustments, rebalances and additions including new collectibles in each stage and a "Death Brushing" mechanic that enacts a slo-mo effect immediately before a character takes a hit, allowing players a last-second chance to dodge.

Why should I care? Many of Mommy's Best Games' games live and die by a defining gimmick that one may or may not gel with, but Weapon of Choice is perhaps the most conventional of the lot and a good starting point for someone who wants to dive into their catalog, or just someone looking for a console-style run-and-gun.

Useless fact: This game was a launch title for the XBLIG service and as such, received slightly more media coverage than none at all.