I'd make a joke about a broken, rushed port being the perfect commemorative project for Sonic the Hedgehog but I'm just so tired, Sega. 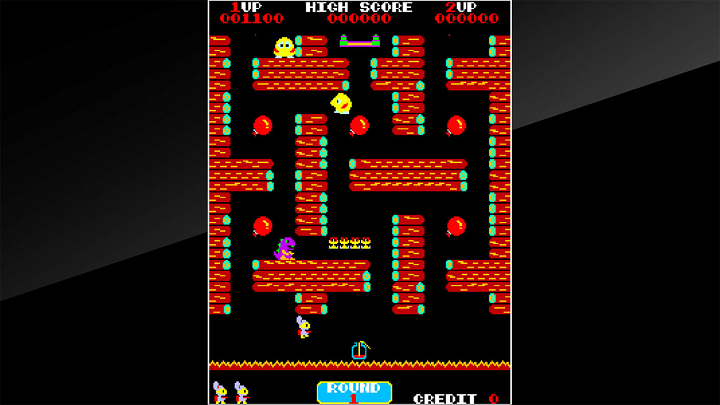 What's this? An overhead action game set in cramped maze-like stages, distributed in arcades by Jaleco in 1982, with a sole port by Sega to the SG-1000 II in 1983. As the title vaguely implies, the player controls a mouse with a flamethrower on a trek to pop all the balloons on each stage, destroying and warding off monsters all the while; the flamethrower becomes successively weaker with each shot and must be restored by popping balloons.

Why should I care? Your kink is extremely specific hit detection and computer-game-circa-1978 control fidelity.

Useless fact: To my knowledge, Pop Flamer is the last game credited to "Japan Leisure Co.", before the Jaleco moniker became the official branding.

What's this? An enhanced port of WayForward's combat-centric, side-view 2D take on Terminal Reality's trashy vampire action series, originally released for Xbox 360 and PlayStation 3 in 2011, with a PC port some years later; this new version offers a newer, more forgiving difficulty setting and utilizes the original full-resolution assets to display at up to 4K resolution and 120FPS depending on platform, with the additional inclusion of full voice acting  by classic Bloodrayne series voice actors Laura Bailey and Troy Baker, among others. (Limited Run Games is offering a physical version right alongside the release of the digital version, should you prefer to own a box and/or an assortment of Bloodrayne-themed doodads.)

Why should I care? Betrayal originally received a somewhat muted reception for several reasons, some fair (a steep difficulty curve and somewhat unintuitive systems for a 2D game) and some less so (many presumed, with absolutely no corroborating evidence, that the game would be a metroidvania when it is in fact a stage-based game with a heavy focus on technical combat); this port directly addresses some of those issues and the others have, hopefully, been mitigated by the passage of time, so one might expect today's audiences to enjoy it more than they once might've. (The core team behind Betrayal also made WayForward's well-regarded Double Dragon Neon and spun off to make Shovel Knight as an independent studio, for whatever that's worth.)

Useless fact: Betrayal was composed by chiptune virtuoso Jake "virt" Kaufman and as such, the soundtrack not only includes the standard fully-orchestrated soundtrack (itself a very direct pastiche of Castlevania: Symphony of the Night) but also features an alternate chiptune version arranged for the same VRC6 expansion chip that powered the music of the Japanese version of Castlevania III and the many soundtracks to Shovel Knight; you can find that soundtrack in authentic .NFSe format here.

What's this? The third and most recent entry in Cave's loose ESP-series of vertically-scrolling bullet hell shooting games, originally released in arcades in 2005; this version is based on the Japan-only Xbox 360 port and consolidates all of that port's extra modes and additional paid features, which include both arcade-quality and HD-resolution modes, a "black label" remix, an arrange mode with fundamentally different game systems and a novice mode for newcomers, as well as a tutorial and the all-important vertical display option.

Why should I care? International players have been blessed with many Cave reissues over the last few years, many of them repeats, but this is one game whose authentic (ie not-smartphone) port has never been released outside of Japan until now, and its unique bullet time-esque "kakusei" system, which lets the player momentarily alter the speed of enemy attacks and cancel on-screen bullets into point items for massive scores, is addictive and unlike most anything else from Cave or their contemporaries. (It's also packed with derivative trance music, if that's your jam.)

Useless fact: The progenitor of the Espgaluda series, ESPRa.De, is partially owned by Atlus, hence Cave's own followups being spiritual and thematic sequels rather than literal ones. ESPRa.De was recently ported to Switch and PS4 in Japan as part of the M2 ShotTriggers series, but the original Espgaluda has not been ported anywhere since the PS2 games; the code for that version is owned by another company, so odds are it won't be ported again anytime soon.

What's this? The latest in a series of "pixel remasters" of the classic pre-3D Final Fantasy titles; this particular entry was originally developed and released for Super Nintendo in 1991 and has been ported, enhanced and re-translated for PlayStation, Game Boy Advance, Nintendo DS, PlayStation Portable and smartphones. This version is ostensibly rooted in the original SNES/Super Famicom version and features redrawn and retouched pixel art and newly-arranged music in supervision with the original artists and composers, a new UI and additional conveniences like an auto-battle feature and a bestiary. (Yes, the font has already been fan-patched.)

Why should I care? As with the prior "pixel remasters", this PC/smartphone release has its share of technical issues and almost seems like a beta test for the inevitable console ports, but should you have faith that they'll be fixed, FFIV is an easy recommendation to any newcomers who want to jump into the series: it's breezy without being patronizing and extremely fast-paced without feeling overly railroaded, and it offers just enough narrative thrust to not feel completely eclipsed by its immediate sequels.

Useless fact: FFIV's localization history is one of edits stacked on top of rewrites stacked on top of more edits, and this new version is no exception: specifically, it seems to be a heavily-revised version of the GBA script, itself a revision of the PlayStation re-translation, and as such retains some of the quirks of that localization, including some but not all of the forced references to early-'00s internet culture.

What's this? A remaster of Sega's 2011 celebrated 2D/3D Sonic platformer, originally released exclusively for the Nintendo Wii (with a companion title for Nintendo 3DS; this version, ported by Blind Squirrel Games, features remade visuals at up to 4K resolution and 60FPS (30FPS on Switch), newly-arranged music, the removal of the lives system and addition of a helper function that assists players who fall off-screen, new game systems like the "Rival Rush" racing mode against Metal Sonic, and the ability to visually customize Sonic via an unlock system.

Why should I care? Upon its original release, Sonic Colors was lauded for being the first 3D Sonic game in years to sensibly iterate on the strong points of the previous title — the wildly fractured Sonic Unleashed — while addressing most of the complaints and even adding a neat new conceit of its own via the wisp power-up system. A decade on, the gloss has certainly worn off somewhat, and this port does very little to meaningfully address Colors' shortcomings (primarily its length and ratio of 2D-to-3D stages) but it remains one of the higher watermarks of the modern Sonic era... or at least, it would if this port wasn't currently malfunctioning in a hundred different ways, including but not limited to violent seizure-inducing graphical bugs. SAYYY-GUHHHH~

Useless fact: This port may currently be broken beyond belief, particularly on Switch, but one of the upsides to it being such a rushed mess is that the developers accidentally left in a ton of development tools and files dating back to the original Wii version that have already proved extremely useful to modders.

After decades, many of the greatest turn-of-the-millennium multiplayer games will finally be playable online at an acceptable standard, with particular early focus given to several classic and cult fighting games including Marvel vs. Capcom 2, Capcom vs. SNK 2, Fist of the North Star, King of Fighters XI and Project Justice. The Flycast Dojo emulator can be used standalone or in conjunction with the ever-popular Fightcade; for a full setup guide, check the website.