At long last, Mr. Driller has ended up where he was destined to be: everywhere. 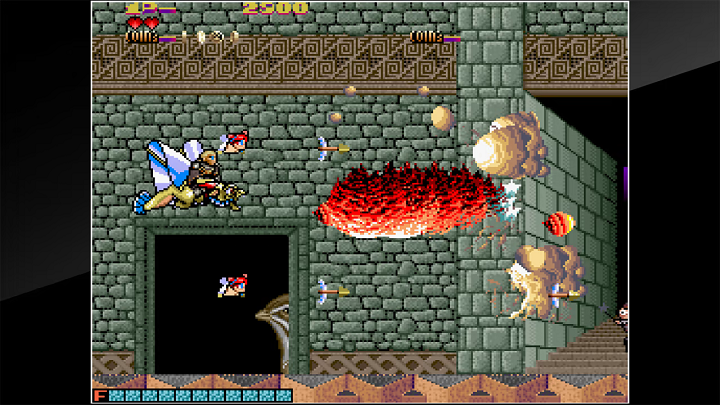 What's this? A horizontally-scrolling shooting game with a dark fantasy motif, originally developed by NMK and distributed in arcades by UPL in 1991; players control a dragon-riding sorcerer, with attacks consisting of both a straightforward forward shot (augmented by fairy options collected along the way) and a fire-breath attack, which is governed by a gauge at the bottom of the screen.

Helpful tip: One of Black Heart's more notorious idiosyncrasies is the ambiguity of the player's hit box and aiming, owing to the fact that the weak point is the rider but the shots themselves originate from the dragon, which itself can clip into walls and floors; the overseas version of the game, included with this release, alleviates that issue somewhat by adding collision to the dragon, allowing it to neutralize any bullets it touches.

What's this? Tantei Kibukawa's mainstream breakout game, originally produced not for feature phones but for the Nintendo DS in 2005 and subsequently ported back to phones with redrawn visuals; the original app version was released in multiple parts, all of which are included here, alongside an independent prequel story app.

Why should I care? This entry is widely considered the ideal starting point for the series — it set a new standard for the series in regards to volume and visual fidelity, even taking into account the cuts that had to be made when porting from DS to feature phones.

Helpful tip: The synopsis of this game (a player killed inside a MMO beta turns up dead in the real world) is extremely similar to that of the very first game in this series, but it's not a remake.

A Boy and his Blob

What's this? A port of WayForward's 2009 puzzle-platformer reimagining of David Crane's non-linear NES boy-blobber, originally released for the Nintendo Wii and subsequently ported to PC, Mac, PlayStation 3/4/Vita, Xbox One and smartphones; to my knowledge, it's a fairly direct port of the Wii game with no meaningful enhancements.

Why should I care? This game marked WayForward's first major foray into hand-animated 2D graphics and it ought to be commemorated for that reason alone, irrespective of how fun it may or may not be to actually play.

Helpful tip: This game's famous hug button isn't entirely superfluous; there's an achievement tied to it, and it's one I imagine nobody is going to fail to get.

Why should I care? This was by no means Apogee's first attempt at a more explicitly console-like sidescroller but it might have been the first one to actually land in that general ballpark, so if you've been looking to dip your toes into the fetid stinkhole that is the early-'90s shareware diaspora, this'd be a good a place to start as any.

Useless fact: This remaster was rushed out at the end of last week to get ahead of Halloween, which also put it ahead of all the last-minute bug fixes the devs had expected to have time to implement — it's patched now but c'mon Apogee, would it really have killed ya to wait a week?

What's this? A port of last year's HD remaster of the final full-calorie entry in Namco's quirky action-puzzle series, originally released exclusively in Japan for the Nintendo Gamecube in 2002; this version retains all the enhancements added for the Switch and PC versions — online leaderboards, HD/wide-screen optimization with 4K resolution support and a new casual difficulty mode — and newly adds online multiplayer (restricted solely to random matches, as far as I'm aware).

Why should I care? Jeremy produced a lengthy video on this very topic, as it happens, but for those who want a briefer answer: it's a surprisingly varied and content-packed action-puzzle game from an era when those games still commanded reasonable budgets, superbly remastered and now playable online for the first time. It also features a lot of very catchy and often completely incongruous music

Helpful tip: The PC and Switch versions will also be getting online play via a free update that may or may not be available by the time of this writing.

A little while after last week's roundup, Brazilian publisher QuByte Interactive formally announced their "QuByte Classics" series of console ports skimmed from the bottomless IP barrel that is Piko Interactive; I was able to ascertain one release ahead of time but I missed another: the 2019 remake of the Ritman/Drummond isometric adventure game Head Over Heels, originally released in 1987 for the European microcomputers of the day as a sequel of sorts to their popular Batman game. This remake was actually a fan-made remake acquired and commercialized by Piko and, to my recollection, they didn't bother to give it any of the extra polish that would've justified charging for it, but I suppose that's a determination best left to someone less judgmental than I 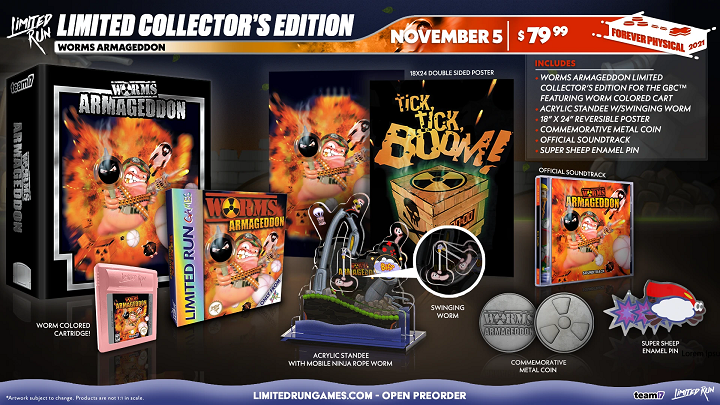 How was the N64 port of Worms Armageddon, dear readers? I ask because I took a bath on the Dreamcast version back in the day — the PAL version, at least, was notoriously faulty and I couldn't get a refund — and for some silly reason I doubled down with the GBC version, which... I mean, okay, it's not like they could've done much better, but y'know where I'm going with this.