How many times does something need to happen before it's tradition? Twice is good, right? I thought so. Anyway, don't forget to partake in the traditional holiday pastime of buying something on itch.io Creator Day this Friday, which will see 100% of your money going directly to an indie developer, without anything being skimmed off the top for the vendor. 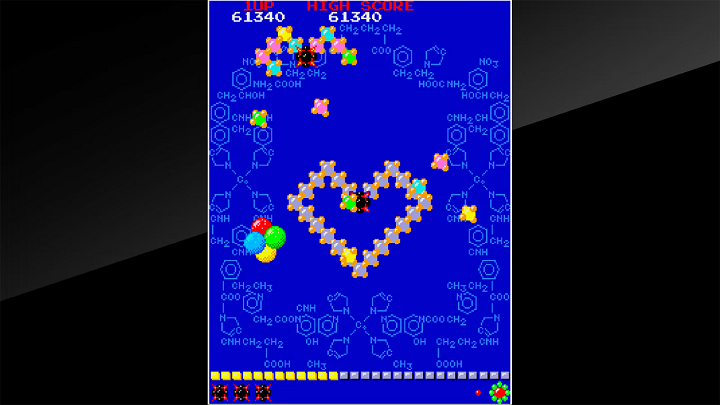 What's this? A little-played shape-matching action game with a chemistry theme, originally developed and distributed in Japanese arcades by Namco in 1983 and ported just twice since: once as part of the third Namco Museum collection for PlayStation, and again in 2012 as one of the launch titles for the Namco Arcade smartphone app. Players control a spiky black atom that can connect itself to the colored molecules floating around each stage by colliding into them at different angles; the player is tasked with combining with the appropriate molecules in order to recreate the specific formations shown in the background of each stage, and they can press a button to discharge the most recently-collected molecule, either as a means of undoing a mistake or to fire it at the writing mass of atoms that serves as the game's primary enemy.

Why should I care? You want to disavow yourself of the notion that everything Namco touched in the early '80s turned to gold (not that it's awful or anything, just... odd.)

Useless fact: I got nothin', sorry. Liquid Kids is up next week!

What's this? The third of three announced ports by publisher Live Wire taken from the catalog of storied arcade shooting game developers CAVE; this title, the fifth game in the seminal DoDonPachi series, was originally released in Japanese arcades in 2008, with an Xbox 360 port and smartphone conversions released in 2010 and a PC port released in 2016. This new Switch version largely conforms to the specs and content of the PC version — which is to say it contains all of the many alternate modes and difficult-to-procure DLC produced for the various iterations of the X360 version — and adds a few tweaks of its own, including more accurate slowdown emulation and some extra training mode features, as well as Switch-specific functionality like vertical display in handheld mode.

Why should I care? First off, this is the first DoDonPachi game released for Switch that isn't a novelty feature phone port, so if you've ever been confused about the validity of one release over another, know that this week's release is the full-fat arcade experience. Beyond that, Resurrection/Daifukkatsu has been the most ported game in the DDP series by far, and with good reason: the standard game is the most approachable and immediately forgiving entry in the series, with the alternate Black Label mode (designed by Battle Garegga mastermind Shinobu Yagawa) offering a truly inventive and thoroughly challenging remix, on top of a bevy of other alternate modes including one themed around sister title Ketsui (and featuring arranged music by Jake Kaufman to boot). Simply put, this package will give you a lot to do once it gets its hooks into you, regardless of how skilled or experienced you may be.

Helpful tip: The dummied-out online leaderboard options for all three of these Live Wire Cave ports will become accessible before long; preparatory patched for the earlier titles will be rolling out soon, and the leaderboard patches will begin rolling out in January, to my knowledge.

What's this? A physical compilation of the three HD remakes of the mainline games in G-MODE's popular minigame series Kuukiyomi, in which players are presented with a rapid-fire assortment of social situations ranging from the mundane to the bizarre and forced to quickly "read the room" and act in the most considerate or gracious manner. In addition to the three HD games, originally produced for the Switch in 2018 and subsequently ported to PlayStation 4 and PC, this collection also includes the very first version of Kuukiyomi, which was originally developed and released for Japanese feature phones in 2008. (The three primary games do feature an English localization.)

Why should I care? I imagine this specific physical release is strictly for people who already care — all three games are already available on international storefronts and are undoubtedly easier and cheaper to acquire that way — but this is the exact kind of quirky, high-concept game that seems agonizingly close to finding a much larger audience outside of Japan, and so any excuse to bring it up again is one I'm happy to take.

What's this? A remake of the first two entries in the handheld-centric "baseball variety" spinoff of Konami's popular super-deformed baseball franchise Powerful Pro Baseball/"Power Pro"., which began on the Game Boy Color in 1998 and saw its last mainline entry on Nintendo DS in 2011; this game recreates all the major scenarios and minigames from the first two "Power Pocket" games using the engine and accompanying system tweaks of the most recent Power Pros games, with new features like the ability to import player data from Power Pros. 2020 and a new "Cyberval" side-game that lets you acquire custom parts for a robo-player by grinding out tank battles online. (A M2-emulated version of the 2004 Game Boy Advance two-pack remake Power Pro-kun Pocket Dash is also included as an early purchase bonus.)

Why should I care? The Power Pocket games found a very loyal audience in Japan due to their absurd and often shockingly dark scenarios and an ever-increasing amount of content that had virtually nothing to do with playing or enjoying baseball, and while Power Pocket R is a remake of the earliest entries in the series and therefore relatively buttoned-down compared to the madness that followed, it's still an enjoyable package and a solid introduction for those who've enjoyed sports-adjacent games in the past, like certain Mario Tennis/Golf games or the more recent Golf Story, and want something in that milieu that goes to another level. (It's entirely in Japanese, unfortunately, but again, this strikes me as a game that could very easily find an audience overseas if it were to be localized, so go yell at Konami and hope they're in the mood to listen.)

Helpful tip: While the tank battle minigame prominently featured in the promotional media does include online play, the vast majority of the game, including the actual baseball portions, are strictly offline-only.

Nighthawk Interactive and Digital Eclipse's early-'90s Disney platformer collection has just been updated with a handful of games that everybody presumed would've been included from the jump: namely, the Super Nintendo, Sega Genesis and Game Boy versions of The Jungle Book and the much-requested Capcom-developed Super Nintendo version of Aladdin. Owners of the original version of the collection can add the new games for a tenner, and those who held out in the hopes of an update can buy a complete version with all the games at retail, should they so desire. 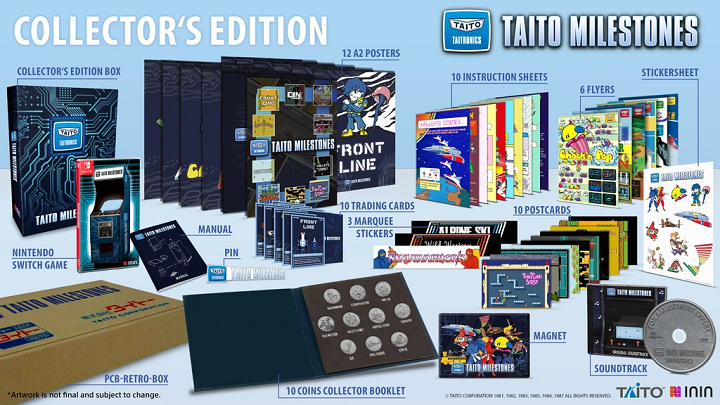 Developed as a joint initiative with Arcade Archives stalwarts Hamster, Taito Milestones seeks to compile handfuls of Taito arcade games, emulated by Hamster collaborators Gotch, into affordable physical packages for those who aren't savvy enough to seek out individual titles, or just want physical options for some of their favorite classic games. As per usual, Taito's frequent international partner ININ/Strictly Limited Games has come quick off the block with their own international packages, including a collectors edition that feature the de rigueur faux-PCB box, a CD soundtrack and a ton of printed replica paraphernalia. (The ten games included in the collection are QIX, Space Seeker, Alpine Ski, Front Line, Wild Western, Chack'n Pop, Elevator Action, The Fairyland Story, Halley's Comet and The Ninja Warriors; most of these games are already available in near-identical form via Arcade Archives, and those that aren't will be made available on ACA in due time.)

THE OTHER ONE TRUE THANKSGIVING TRADITION

I can't imagine any regular readers don't already possess one or all of the Everdrive flash carts by now, but there's certainly no harm in reminding people of the annual sale: 20% off all stock, encompassing NES/Famicom, Game Boy, SNES (including Super FX-compatible options), N64, GBA, Sega Master System, Genesis, Game Gear and TurboGrafx-16.