After all the rumors, the Klonoa remaster two-pack is finally among us. Will this humble series finally catch a break, or is it destined to flop a third time?

What's this? A horizontally-scrolling shooting game starring robotic rabbits, originally developed by strip mahjong aficionados Video System and distributed in arcades in by Video System and Midway in 1987, with later releases including a remixed PC Engine conversion and an emulated reissue via Hamster's Oretachi Gesen series for PlayStation 2. One or two players are tasked with controlling robotic "USAGI" on a quest to rescue the king and princesses of Bunnyland; in addition to conventional systems like a semi-automatic shot and bomb-style missile swarm attack, the ships are able to throw powerful punches by hitting the fire button in close proximity to enemies, as well as jump off flat surfaces by performing the correct command.

Why should I care? Rabio Lepus represents Video System's first big foray out of the strip mahjong market and into the world of more legitimate games, and it was a solid start — it offers a very accommodating level of difficulty and a lot of well-drawn but incongruous stages and enemies that foreshadow the more comical elements of Video System's later, more celebrated Aero Fighters/Sonic Wings series.

Useless fact: A vertically-scrolling sequel to Rabio Lepus was originally planned and advertised under the name Metal Rabbit, but that game was eventually reworked into Turbo Force.

Why should I care? You want to find out if a Genesis-exclusive FPS can be enjoyed outside of the context of being a FPS on the Genesis, while still running and feeling exactly like a FPS being run by a Genesis.

Helpful tip: In case you missed it, both this collection and some Genesis/MD cartridge reissues were made available a few months ago.

What's this? A crowdfunded remaster of Tomomi Sakuba's nightmarish point-and-click adventure game, originally released for Windows PC and Mac in extremely limited quantities in 1999; released for iOS and Android late last year, this remaster is now available on PC and boasts redrawn and/or manually-revised HD graphics, a modern UI and many modern quality-of-life features, rebalanced puzzles, a substantial number of new quests and a voluminous amount of new in-game text, including a new ending, on top of the brand-new localizations.

Why should I care? Garage is part of an unaffiliated trilogy of late-'90s Japanese ADV — the others being Zeque's Kowloon's Gate and Sting's Baroque — that were lumped together by fans due to similarly bleak atmospheres and atypically challenging or inhospitable narrative bents, and while neither game seemed likely to make any sort of comeback, the most obscure game of the bunch has arguably made the biggest leap back into the spotlight, not just via the new multi-language localization but through the bevy of enhancements and changes made to not only make the game less inaccessible but to illuminate returning players on the many, many dead ends and unresolved threads that littered the original game.

Useless fact: The original PC version of Garage was so rare, owing to the withdrawl of the publisher immediately after release, that for many years there was some conjecture about whether it was even officially released or whether the developer simply chose to mail the copies in his possession to those he could proved had placed orders for it.

What's this? A 25th-anniversary remaster of the two mainline games in Namco's whimsical 2.5D platformer series Klonoa, originally released for the PlayStation and PlayStation 2, respectively; in addition to retouched visuals with support for 60FPS and up to 4K resolution, these versions add a two-player assist mode and a handful of new tutorials and optional difficulty settings, as well as support for downloadable cosumes, both via the digital deluxe edition and as additional paid DLC. (OG Klonoa is specifically based on the 2008 Wii remake, altered to more closely resemble the aesthetic and designs of the 1997 PS original.)

Why should I care? When publishers claim reissues like these as a potential interest check for further entries in a series, I don't necessarily take them on their face, but I will say this: Klonoa is a series that has traditionally struggled to find commercial traction due to concerns about being too childish for broader audiences or hewing closer to traditional 2D gameplay during an era when 2D gameplay was falling out of fashion, but today's audiences are not only much wider but far less dogmatic about such antiquated concerns, so these reissues seem me like a perfect opportunity to finally break a series that has until now only seen modest success, both to new generations of players but to older heads whose own prejudices may have kept them from experiencing a pair of expertly-crafted and thoughtfully-written action games (with more than a little classic  Ninja Gaiden DNA, as it happens).

Helpful tip: Klonoa Phantasy Reverie Series does have a demo on most consoles, but only in Japan and Asian regions; similarly, a physical release does exists, but not in North America.

HEADS UP, TAITO'S BACK ON THEIR NONSENSE 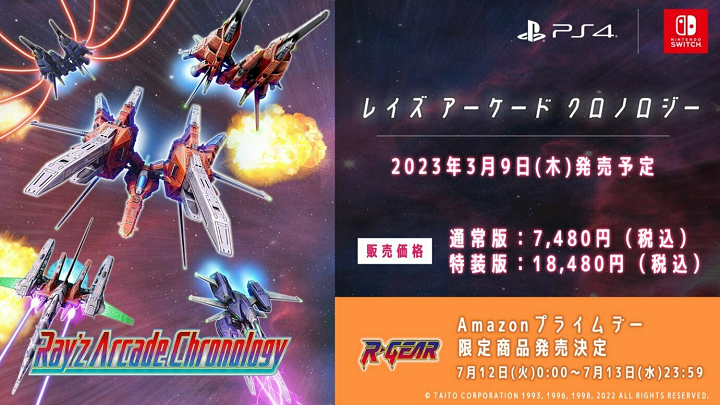 Taito and M2 are teaming up with another shooting collection, this one centered around the RayForce/Storm/Crisis trilogy and scheduled for release in Japan in March of next year. Right on! They're also sticking this new collection with an exclusive bit of content that you will almost certainly never get access to in any region unless you pre-order the collection on Amazon Japan during the 48-hour Prime Day beginning July 12: a copy of R-GEAR, the unfinished follow-up to RayForce that has been hotly investigated by collectors for decades and is being made available here in playable form (albeit just the one stage). Oh goddammit, Taito, stop.