I pushed this week's update back a little in the hopes of at least being able to bring you news on the latest PlayStation Premium classic titles, but it turns out Sony feels no obligation to deliver them consistently or regularly, so, um... hope ya like Gun Frontier! (I feel I also ought to mention the international launch of Shin-chan: Me and the Professor on Summer Vacation, which is not an old game but is a licensed take on a Japan-only "slow life"series, Boku no Natsuyasumi, that Retronaut alum Ray Barnholt has been proselytizing for at least a decade, so give it a looksey.) 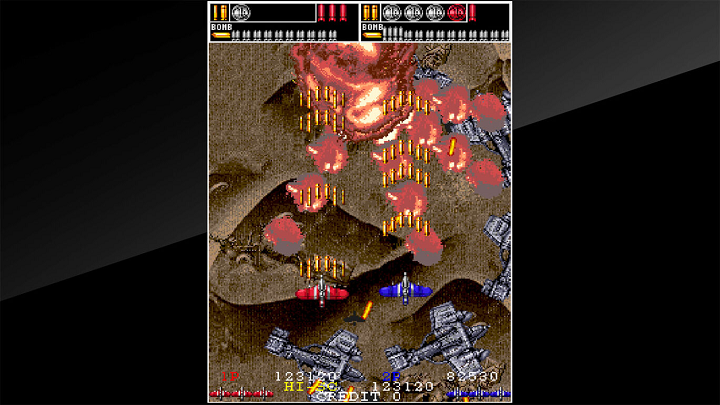 What's this? A vertically-scrolling shooting game with a unique sci-fi/western motif built around gun-shaped aircraft, originally released in arcades by Taito in 1991 and later ported to the Sega Saturn in Japan, with emulated reissues on the PlayStation 2, PC and the recent Egret II Mini. Gun Frontier's game systems are relatively conventional ⁠— it uses a two-button, shot-and-bomb setup, with bombs assembled from collected fragments and fired with a slight direction in the opposite direction of your ship ⁠— but belie a bevy of hidden scoring tricks and many under-the-hood systems designed to jack up the in-game difficulty (rank) in ways that may not be obvious. (Due to a Japanese holiday, you may have to wait a day later than usual for it to appear on the digital store.)

Why should I care? Gun Frontier is a game with an austere aesthetic and a surprising amount of production for a game of its vintage (most notably the very unconventional end-boss sequence, which I won't spoil) that was intended for broad audiences but whose legacy is that of a difficult and somewhat byzantine whose quirks were maximized and extrapolated by Raizing's Battle Garegga; as a single-purchase home game, you can approach it from whichever vector you wish, and you can't go wrong either way. (It's also worth noting that this game is part of an extremely loose trilogy of games that included the extremely dubious dinosaur-themed fighting game Dino Rex, a game that recently received a 128-person tournament that raised thousands of dollars for charity.)

Helpful tip: One of Gun Frontier's more notorious rank systems is tied to autofire, so the Arcade Archives version offers a specific autofire option that's capped just slower than the rate of fire that triggers the rank increase.

Following the OG Phantasy Star vinyl from a few months ago comes Ship to Shore's official soundtrack release for the 16-bit follow-up, Phantasy Star II; specifically, the Genesis version, which features far more subdued and less intrusive percussion. As is customary, the soundtrack is being handled by multiple international vendors, so check the US, Canadian, UK and European sellers for stock on the clear variant, or hope StS themselves still has copies of the blue/magneta swirl variant left in stock.