As can sometimes happen, this is a quieter week for retro re-releases, but for good reason: one, most of you will be too busy with Spatoon 3 to notice anything else, and two, those of you with no interest in Splatoon 3 may want to check out the legacy Playstation Premium updates that I, uh, forgot to mention last week — in my defense, I don't use the service and I've already been conditioned to ignore the updates on account of, y'know, Sony. 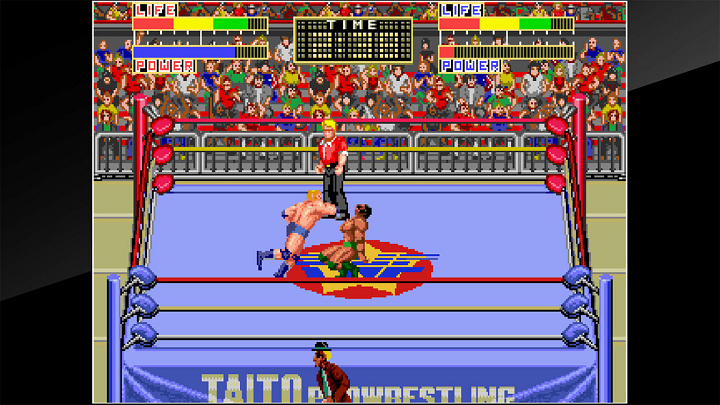 What's this? Taito's crack at making an arcade wrestling game in-house, originally released in arcades in 1989, with a PC Engine port released the following year and sporadic emulated reissues thereafter. Players can choose from one of eight characters and fight for a title, with an occasional cage match along the way; the CPU can be fought solo or as a tag-team duo, and up to four players can fight in a 2v2 multiplayer tag match.

Why should I care? Rastan's in this bad boy. Rastan! Beyond that, this game has a slightly wider variety of wrestling techniques than other games of its vintage, and the visual depictions of your character spending their winnings, and your opponents being made destitute, is a fun touch.

Useless fact: Champion Wrestler was initially designed to be controlled with a trackball, but at the extreme insistence of Taito's sales team, the game was put on location in both trackball and stick-equipped configurations and the joystick version was overwhelmingly more popular, so it became the standard and only version for the game's final release (to the disappointment of the game designer).

Why should I care? Radical Rex splits the difference between a Sonic-style game and the likes of Joe & Mac, so you can have fun being disappointed along a variety of different vectors.

What's this? A remaster of an 2011 Xbox Live Indie game released in by prolific XBLIG dev Mommy's Best Games, oiginally designed to satirize Microsoft's burial XBLIG on the Xbox 360 dashboard; once you get past the dashboard gags, you're confronted with a simple horizontal shooting game, made less simple in this version via a couple additional modes, some system changes, online leaderboards and two-player co-op.

Why should I care? You still harbor a grudge over Microsoft's negligent homocide of XBLIG, or have enough broad awareness to at least understand the general gag. As for the game itself... well, it was so slight on XBLIG that I can't imagine a scenario in which this version isn't more fun.

Helpful tip: Due to Nintendo's many rules about how developers can and cannot reference or mention competing companies and hardware, a lot of Game Type's more pointed or direct references have been changed or watered down for the Switch version, so if you want the true experience, play it elsewhere.

Based on the '90s adaptation of a '70s newspaper manga, Popolocrois Monogatari became a mainstay Sony franchise in Japan for the better part of a decade, but only two of the games in the series made it overseas: a hacked-up amalgamation of several games for PSP, and a Bokujo Monogatari/Story of Seasons crossover game for 3DS. Now, the original entry in the mainline series has been thoroughly translated in its original form, and those who enjoy relaxing, low-stakes RPGs ought to give it a look.

Released a little while after last week's roundup, the collectors' edition and dual packs for the Nintendo-exclusive "chase 'em up" series Go Go Kokopolo! have already sold out, but the individual standard versions of the original 2011 game (which was released exclusively via DSiWare and has been unavailable for years, but has now magically resurfaced on a 3DS card) as well as the not-even-close-to-retro 3DS sequel, are still available while supplies last.