This week's marquee release — Atari 50, the Digital Eclipse-made virtual museum to many things Atari — attempts to chart a new course for commercial video game collections, but irrespective of whether their efforts will prove successful, they've managed to include Tempest 2000, so one cannot possibly argue that positive progress has not been made.

What's this? A sci-fi run-and-gun action game, originally developed and distributed in arcades by Namco in 1985 and ported to the Sharp X68000 computer a decade later, with further reissues for PlayStation, Wii and Xbox 360; players are tasked with infiltrating the Baraduke, the underground base of the aggressive "Octy" race, in order to liberate and rescue the peaceful "Paccets"; each stage is cleared by destroying the various Octy on each map with a recoil-heavy wave gun, with liberated Paccets offering extra shield protection, assistance during boss fight and access to the between-stages roulette.

Why should I care? Baraduke was an early attempt to diversify from Namco's typical friendly pop image with something more harder-edged, and while it's a far cry from the likes of Splatterhouse and Genpei Toumaden released soon after, it still succeeds at offering a tense and relatively tough space-horror experience. (Also, spoiler(?): you play as Mr. Driller's mom.)

Helpful tip: At some point, you'll be expected to use the recoil from firing your weapon to push your character through walls as a means of progression, with no real indication that this is a thing you ought to be doing, so keep that in mind if you run out of ideas on how to progress.

What's this? A second collection of ten emulated Neo Geo Pocket Color games, developed by long-time SNK partner Code Mystics; these games are equipped with local versus multiplayer where relevant (but not other link-cable functionality like item trading) and are enhanced with some basic screen options, button mapping, save states, a variety of Neo Geo Pocket-themed screen borders and a rewind feature, as well as 3D models of the original boxes and cartridges and scans of the original game manuals.

Which games are included? Six new games  — Baseball Stars Color, Neogeo Cup '99 Plus Color, Pocket Tennis Color, Puzzle Link 2, The King of Fighters: Battle de Paradise and Ganbare! Neo Poke-kunI — join the four games released individually on the Switch eShop over the last few months: SNK vs. Capcom: Card Fighters Clash (both versions), Biomotor Unitron, Big Bang Pro Wrestling and Mega Man Battle & Fighters. Each game has both English and Japanese ROMs available where relevant, as well as support for the standalone games' save data and access to content that may have necessitated linking to another NGPC/Dreamcast game.

Why should I care? While it's unfortunate that three of the ten included games remain in Japanese, including one (Battle de Paradise) that's particuarly language-intensive, this second collection offers a wider genre selection than the first and an overall solid assortment of games, including the marquee Card Fighters Clash, that leaves just enough wiggle room for a potential third volume to round up the last of the heavy-hitters.

What's this? An "interactive journey" covering 50 years of Atari, developed by Digital Eclipse; in addition to emulated versions of over 100 games covering the familiar (arcade, 2600) to the more obscure (Jaguar, Lynx), this collection also features an interactive timeline of Atari history, a swathe of archival material and hours of documentary-style interview footage with developers, historians and afficionados on the legacy of Atari.

Which games are included? The full list is far too long to post here, but in short: twenty-five arcade games, four Atari 800 games, forty Atari 2600 games, five Atari 5200 games, seven Atari 7800 games, nine Atari Jaguar games, six Atari Lynx games and the handheld game Touch Me!, as well as six "reimagined" games, ie brand-new remakes, sequels and/or reinterpretations of select Atari classics. (In case you're not aware, the arcade games and IP made and owned by Atari Games are not owned by current-day Atari and are thus not part of this collection: no Marble Madness, no Gauntlet, no Paperboy, etc.)

Why should I care? This entire collection is an exercise in attempting to make people care about a collection of games that are, for the most part, not just "retro" but certifiably antique — every inch of the package has been engineered to foster understanding, curiosity and appreciation for the many historically significant games contained therein, to the extent that might consider the games themselves as ancillary to the larger "digital exhibit", and one has to imagine it represents a new direction for commercial retrospective anthologies. Beyond that, they stuck Fight for Life on this bad boy.

Helpful tip: For those looking to play the paddle games with an increased degree of authenticity, Digital Eclipse's Mike Mika has created a DIY analog paddle adapter for Xbox controllers and Switch  joycon, which can be found here.

What's this? A remaster of the 2010 PlayStation Portable remake of Quest's tactical RPG Tactics Ogre: Let Us Cling Together, originally released for Super Famicom in 1995 as the second entry in the Ogre Battle series; in addition to the many enhancements made for the PSP version, this remaster adds full English and Japanese voice acting, new HD-friendly character portraits, a new live-performance soundtrack overseen by composer Hitoshi Sakimoto, a redesigned UI and control scheme, a double-speed feature and AI macros, significantly improved enemy and partner AI and a swathe of mechanical changes and rebalances, the most major of which being the switch from class-based leveling to individual unit levels.

Why should I care? Tactics Ogre is a series that, due to past choices of platforms and general lack of accessiblity, is rarely discussed outside of Japan beyond the context of being "the other tactics game" by Final Fantasy Tactics creator Yasumi Matsuno, but now that it's being reintroduced to a global audience in an era where nominally similar tactics RPGs like Triangle Strategy are inexplicably successful, and with a fairly comprehensive quality-of-life sweep atop the many accessibility features already present (like the rewind functionality) at that, this might be your chance to finally sink your teeth into what has always been a very thoughtful, narratively dense and extremely replayable and content-rich Japanese tactics RPG.

Useless fact: Tactics Ogre: Reborn's sprites do have a quasi-filtered look that might call to mind some of Square's other, less-flattering pixel art remasters, but they're actually a fairly accurate x4 retake on the PSP version's sprites which had that look to begin with, so there's not necessarily anything one could do to "fix" them. 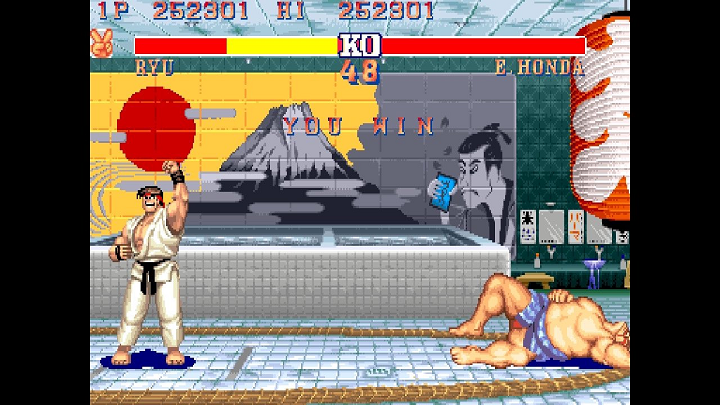 Capcom's two Arcade Stadium collections have just been updates with several small welcome tweaks, like the ability to disable virtual camera movement for the right analogue stick and a more useable rapid-fire options, but perhaps the most conspicious change is yet another edit to E.Honda's classic Street Fighter II series stage background which, while still lacking the contentious rising sun motif, now looks significantly less slapdash than the previous edit, putting it in line with other reissues like the Capcom Fighting Collection.

The last year or so has seen several massive advancements in hacks and technical discoveries pertaining to the original StarFox, and this just-released mod acts as a grab-bag of many of those experimental additions, including five-player multiplayer, enhanced performance, support for multiple periperals, a freely-controllable camera and much more. (This hack's currently playable on real hardware via the FXPAK Pro flashcart, but other popular options like MiSTER and SNES Classic aren't currently supported.) 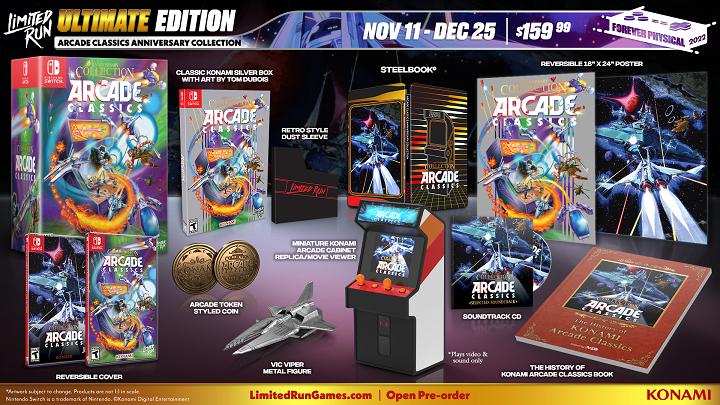 Konami's Arcade Archives-powered collection of arcade shooting games (plus Haunted Castle!) has followed the Contra and Castlevania collections into the physical world, and not just via the collection itself — in addition to the three different physical game tiers, LRG's offering skate decks, t-shirts, vinyl LPs and more. 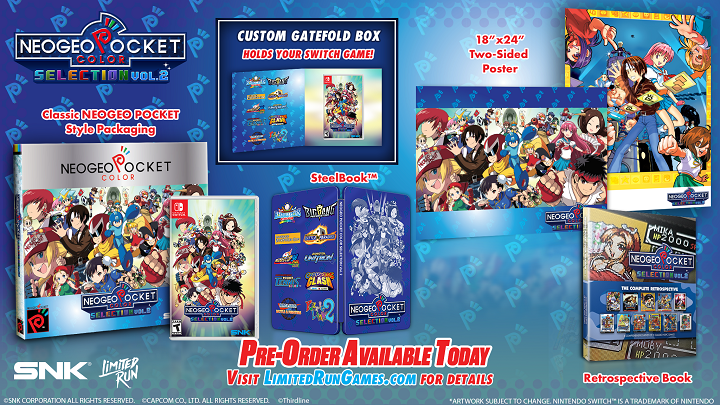 This week's surprise drop for the second Neogeo Pocket Color Selection anthology is accompanied by orders for a physical version which, in LRG's case, includes a second exclusive retrospective book which, to my knowledge, is being authored once more by Retronauts' own Diamond Feit. It also has a big-ass box, but I suppose that's nothin' novel. 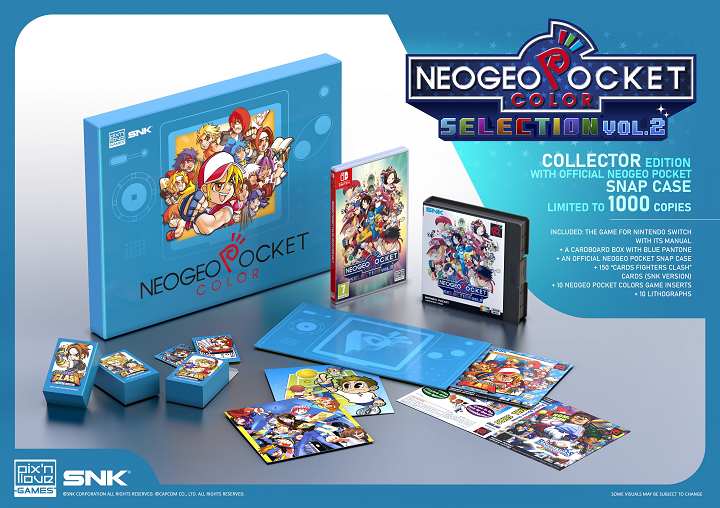 ...and, not to be outdone, the French publisher Pix'n Love is producing their own physical versions of Neogeo Pocket Color Selection vol.2, which includes two distinct SNK- and Capcom-themed variants of the collector's edition that each contain one respective half of a physical Card Fighters Clash deck. Shrewd, innit?