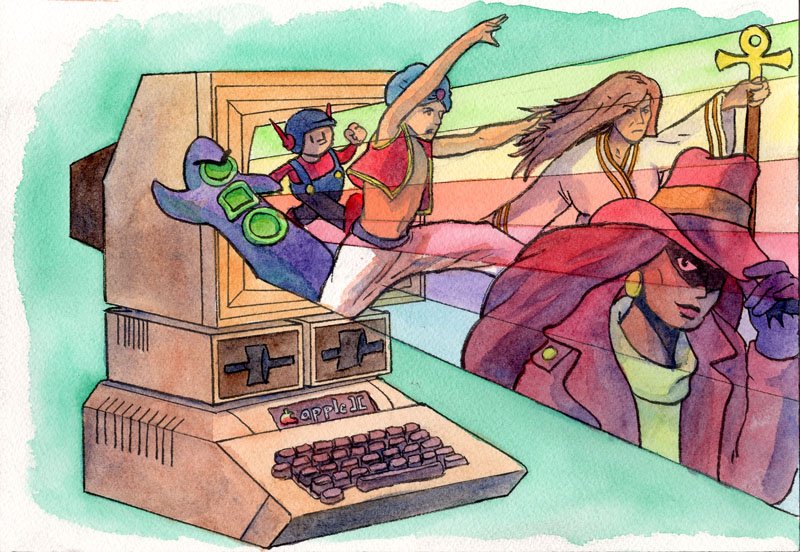 One of our goals with taking Retronauts weekly was to add a "Retronauts East" series to the lineup... which is basically a fancy way of saying that it would be prohibitively expensive and time-consuming for me to travel out to San Francisco frequently enough to record a sufficient number of full weekly episodes with Bob to run one every single week. So rather than make that impossible effort, I'll be recording one episode each month right here in the comfort of my own home in North Carolina. Conveniently, a lot of people with extensive knowledge of and roots in video games happen to live right here in Raleigh, thanks in large part to the presence of several major tech-centric universities, as well as fixtures like a headquarters for IBM, and even some major game studios like Epic.

With this week's episode, you can enjoy the first fruits of these labors. Retronauts episode 87 doubles as Retronauts East episode 1... and while it has a few rough edges we'll be endeavoring to sand down in subsequent entries, I feel it makes for a pretty solid start. A big component of the Retronauts East mission statement is to tap into the potential of bringing in new contributors to the show. Bob and I have many areas of specialization about which we can speak with ease (or else this whole podcast endeavor would be moribund by now), but we also have many areas of game history in which we need to rely on our guests. Retronauts East's fresh new contributors will allow us to expand the show's horizons beyond the areas to which Bob, our regular San Francisco-based contributors, and I can speak.

You'll see that in action right here as we tackle a topic that, to my recollection, has never before been covered in any Retronauts format over the past decade. The Apple II computer is essentially the foundation of PC gaming — it's not only the original mainstream home computer, the hardware was built in part for the express purpose of being able to play games. We've gone far too long without tackling such a critical point of video game history, and thankfully this week's guests — Benj Edwards of Vintage Computing and Ben Elgin of academia — have plenty of experience with and knowledge of the platform to share. It's a fairly general overview of the system, but I feel pretty confident that we'll be circling back to cover some of the topics we touch on here in far greater depth in due time...

Episode description: It's the debut of Retronauts East as East Coast gaming experts Benj Edwards and Ben Elgin join Jeremy to discuss the Apple II computer platform: Its origins, its games, and its legacy.

As I mentioned, there are some rough edges to this episode. Besides the mild awkwardness of forming a new podcast Voltron (it's kind of like going on a first date, except without the nervous flirtation or expectations of a goodnight kiss), this new recording setup has a few quirks that need refinement. Fortunately, the most egregious audio issues — that annoying, disruptive static burst that keeps appearing, and the low fidelity of my mic — have already been attended to. Next time should go far more smoothly, so please bear with us for this pilot effort, and look forward to a second Retronauts East effort in about a month. Thanks! And thanks especially to Ben and Benj for making this show possible. You can follow Ben on Twitter at kirinn, while Benj is at benjedwards, if you'd care to see more of their thoughts on video games, and also not-video games.

And finally, this week's musical interludes come from Wizardry Suite: We Love Wizardry, a 1987 tribute album to the Wizardry games composed by Kentaro Haneda. Seems a fitting choice for a show on the platform that served as host for the RPG franchise that helped inspire not only the dungeon-crawler genre basically the entirety of all Japanese RPGs...