The ZX Spectrum Next Stretches out to 400K on Kickstarter

Following 10 days of campaigning, the ZX Spectrum Next has proven to be something of a big deal on Kickstarter, earning its £250,000 goal in just 24 hours and now standing at over £400,000 with just under 3 weeks still to run on the campaign. It now seems that the project — an FPGA-based attempt to recreate the classic British computer — could well end up creating a much stronger computer than its original inspiration. The project has already breezed through one stretch goal to upgrade the FPGA chip inside the system, and is on course to reach a goal that guarantees the possibility of memory expansion. Other stretch goals are still to be announced.

Reviving the ZX Spectrum is something that a fair few people have either tried to do, or have projects on the go for — there’s a pretty high demand for it in the UK, and as worldwide awareness of the classic games available on the system has grown more people outside of the UK have expressed their desire to get into the system... however, the system can be something of a pain to play for people outside of PAL regions (later, I’ll write a post letting American folks know of the best way to play Speccy games). Most efforts so far have been largely ARM-based system on a chip affairs that concentrate on emulation, but the Spectrum Next is different — because it’s FPGA-based, no emulation is involved at all. That could make the experience that little bit more authentic for some people.

The Spectrum Next, a project led by Brazilian-based retro hackers Victor Trucco and Fabio Belavenuto, original ZX Spectrum designer Rick Dickinson, Jim Bagley — developer of classic ZX Spectrum titles such as the Ocean Software ports of Midnight Resistance and Cabal — and Bossa Studios co-founder Henrique Olifiers, is not something that has just appeared overnight. Public comment on the project dates back to the start of last year, when the system was announced with full specifications and Dickinson’s sleek modern-yet retro design already in place; crowdfunding was always set to be part of the project, and after a year or so of quiet hype, the team’s labours are paying off.

What exactly are the Spectrum Next’s intentions, then? It is aimed to be compatible with most classic pieces of Speccy hardware, so there’s no need to throw away any old Kempston Joysticks, SpecDrums and Currah Microspeeches you have lying around — and it does have the all-important HDMI-out feature, with the help of a Raspberry Pi Zero, so it'll look reet nice on your modern telly. If you wish to have something shiny and snazzy looking to bust out yer 3D Death Chases and Manic Miners on, the new system can do that comfortably with SD Card storage — and if the thought of not waiting at least 3 minutes for a game to load is as troubling to you as it is to me, don’t fret; you can still dust off your old external cassette deck, hook it up to the Next, and load up games the old fashioned way. The board has even been designed so that it’ll fit neatly inside an old ZX Spectrum 48k case.

However, the Spectrum Next is designed with more than just the old classics in mind; it is a continuation of a trend that’s seen hardware hackers and demosceners do things with the old Spectrum that’d make Whistlin’ Rick Wilson’s trousers fall down. The Speccy has always had a popular homebrew scene, one that’s occasionally turned heads with the likes of Castlevania: Spectral Interlude, an excellent fan-made take on the series with a unique Spectrum touch — but away from variations on popular games, a great deal of new Spectrum titles are still being made for the 35 year old computer. The Next is made so that these projects can go even further, with the team openly wondering on their Kickstarter page about what hackers could do with it and thinking that we might see an OpenGL Spectrum in the future... it’ll be a while before the power of this system is truly unleashed, but the Next may well be a good buy if you’re looking for new games with an old computer twist.

At this stage, it seems as though the Spectrum Next is now the clear frontrunner out there when it comes to projects that bring the old system back to life, particularly as the more game-focused Vega+ handheld — a project backed by Sir Clive Sinclair himself — has continued to struggle with delays, controversy, in-house bickering and angry backers demanding news on when the beleaguered system will actually be done.  It helps that Henrique, Jim and company are actually able to show off the board itself, immediately dispelling any notion that the Next would be just another emulator-based system. Backers have the option of pledging for just the board at the cost of £99, while the finished computer is available at the £175 pledge level, with delivery estimated for January 2018. The case design and the board are already there then, and the Next as a computer exists — what remains to be seen now is how the vagaries and difficulties of creating molds, mass production and shipping will affect the product.  But the team have a plan to make the ZX Spectrum relevant well beyond its 35th year, and there’s a definite chance that they will succeed. 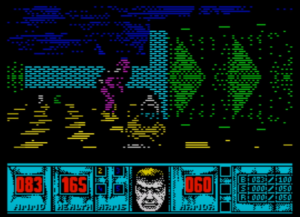 You can even play Doom!