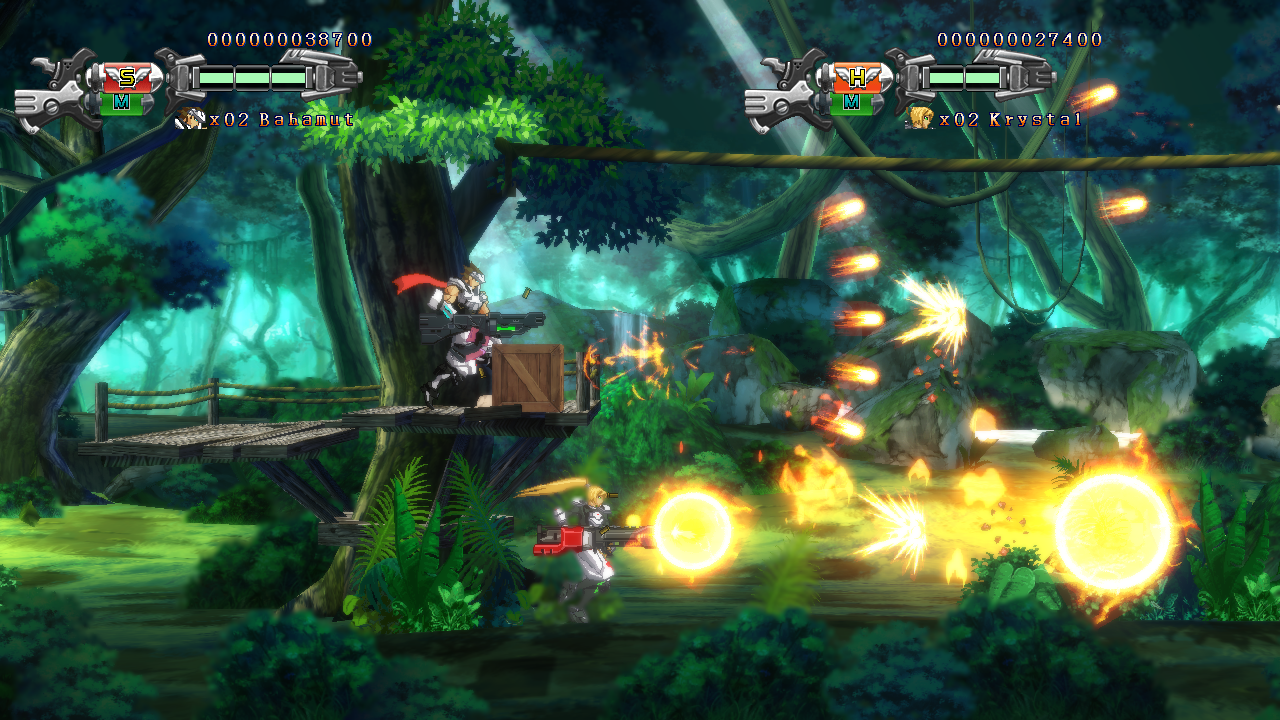 This morning, Microsoft announced that Hard Corps: Uprising has been added to Xbox One Backward Compatibility. First released on both Xbox 360 and PlayStation 3 in 2011, this run-and-gunner was met with equal parts enthusiasm and confusion. And it is, in fairness, quite an odd duck. For one thing...that's Contra, right? Two-player co-op, spread gun, jungle stage... It's even published by Konami, so you know it's not just some knock-off. It reprises the anime aesthetic of 1994's Contra: Hard Corps (courtesy of Guilty Gear developer Arc System Works) and even directly recalls that title—just not, you know, the "Contra" part.

It seems that in an early example of the inexplicable corporate decisions that have come to define them, Konami insisted on disassociating this game from the time-honored series for which it was clearly created. Not that they were fooling anyone—reps struggled to hold the company line when the press grilled them with the obvious questions at trade shows. But the game certainly attracted much less attention than it might have had it borne the familiar brand.

In addition to its art style, Contra: Hard Corps distinguished itself from the rest of the series with a colorful cast of playable characters, each with their own unique weapons. The move set expanded with a slide move, allowing the player to escape damage if they found themselves cornered, and one character could even perform a double-jump. By far, though, the greatest departure from series convention was the three-hit life gauge, such that it only featured in the game's Japanese version. Subsequent Contra titles shied away from all this ambitious complexity, but after seventeen years, Hard Corps: Uprising not only went back to the well but jumped in feet-first.

You'll notice right away that the life gauge is back. Characters generally differ by their agility and the length of their gauges while sharing weapons and abilities, but some offer entirely unique play styles. Leviathan can moonsault across the screen while pelting everything below with bombs, and Sayuri eschews guns in favor of a katana that lacks range but deals unparalleled damage if she can close the distance. Every character has access to a staggering array of acrobatic moves, including a double-jump, an air dash, and a slick maneuver where you slip past an enemy with an opportunity to immediately shoot them in the back. You can vault over obstacles close to the ground, send pieces of the environment flying into enemies, and even reflect bullets.

The breadth of options is downright overwhelming at first, especially compounded with all the over-the-top chaos unfolding in any standard Contra stage. But just as true to form, Uprising is designed to be played again and again. As your skills improve and you grow more accustomed to your surroundings, you can begin to identify the best places to employ each move, until you find yourself speed-running stages with the grace of a ninja commando. If that seems like a bridge too far, replay value also abounds in Rising Mode, where you can upgrade your mobility, weapons, and life gauge to ridiculous excess. Is being able to take three hits not enough? How about eight? Not loving that double-jump? How about a triple-jump?

Despite its ambiguous title, Hard Corps: Uprising is without a doubt a bold evolution of the Contra series, more than worthy of the name. A PlayStation 4 port is probably too much to hope for, so if you own an Xbox One, don't miss this opportunity to give it a go—whether it's your first time or you're still saving up for that seven-way spread gun.