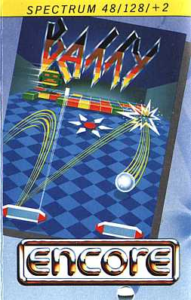 Now that you know how to set up a ZX Spectrum -- or at least have some virtual way to play one -- it’s time to start talking about the best games to play on it. Few libraries are more intimidating than that of the Speccy -- 24,000 released games is not a typo. It’s a big number, and it’s one that’s actually increasing with people making new games for the Spectrum every month. The “commercial” period of the computer lasted between 1982 and 1993, and it’s not like you had to reach out to Sir Clive Sinclair himself to get approval for every piece of software that was released on the machine. And so, you have brilliant and unique games on there, along with some of the worst games. You don’t truly know badness until you play SQIJ.

But I’m not here to talk about bad games -- I’m here to talk about Batty. Hard though it might be to pick a game to start with, this one’s actually ideal...it’s an Arkanoid clone -- or Breakout if you prefer, but it’s closer in spirit to Taito’s game what with all the power-ups, the small balls, big balls, multiple balls, all the balls you can eat and so on. Either way, you smash through all the blocks that you can while trying to stop monsters from mangling your ship or sending your ball off to who knows where, over the course of 15 levels. A simple enough game then -- there isn’t much to make it stand out from other Arkanoid clones aside from the quality of it.

And hoo-boy, is it quality. As you might expect, Breakout clones themselves are a penny for a pound on a computer like the Spectrum -- and lord knows there’s plenty of terrible ones out there. Arkanoids I and II also got ported to the Spectrum courtesy of the almighty Imagine Software label, then run by Ocean Software -- and both ports are actually superb. But Batty outstrips them all -- it’s fast, it’s got a bigger playing field, it’s hard as nails, and the levels are very well done. There’s nice little additions to the classic formula -- such as magnets that can be turned on and off -- that add a little to the smashing of endless blocks to smithereens.

However, Batty isn’t just good because it’s a very well done Arkanoid clone. It’s good because it’s a FREE well done Arkanoid clone that was released by Your Sinclair, on a cover tape, for nought but the cost of the magazine. And so, a lot of people ended up with their eyes on the game -- it was so loved by the Speccy’s userbase that eventually Elite, the software house who somehow ended up giving this game away to the magazines, re-released it themselves as a budget title and made quite a nice little earner out of it.

The cover tapes are a big part of what made owning a Spectrum so exciting -- games were cheap enough in most cases at around three quid a pop from the corner shop, but even the tape on the front of your mag each month could have a classic on it. Not that all cover tape games were of the same quality as Batty -- far, far from it, especially as the tapes expanded to include way more than one game in their later years. But it was a sign of what you could get, and there were plenty more classics that only ever saw release on a magazine; games like Hyper Active, Ceasefire, Egghead and The Bobby Yazz Show. For many though, Batty is the best of them all -- how Elite managed to give it away I do not know, although perhaps an Arkanoid clone like this would get more attention on the mags than out on the shelves. It stands as the most popular Spectrum cover tape game, and one that helped establish the tape as something to watch out for and anticipate every month.  It’s a pretty good game to kick things off with!