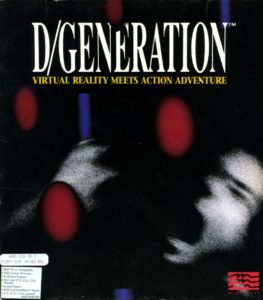 D/Generation always seems to be a game that slips through the cracks somewhat, despite being a thoroughly cyberpunk game that combines a lot of different elements together pretty well -- there's isometric shooting, a decent amount of puzzling, and a lot of good plot and mood setting. It's also one of the legitimately really good games that came out for the CD32, not to mention one of the few CD32 re-releases that actually took advantage of the new platform -- although it's still probably best on the A500 simply for controlling reasons.

Anyway...D/Generation. What is it? You play as a thoroughly oblivious courier who has to deliver a package to the offices of a company called Genoq. Specifically, you must deliver it to a researcher named Jean-Paul Derrida, perhaps the most awesome compound name made up of two famous people in the history of games. In the beginning, you don't really know anything at all -- you're just a lowly courier, until the office doors lock behind you and you're suddenly greeted with lots of dead folk, security systems that have gone haywire, and a ton of biomonsters lurking on the ten floors between you and your delivery point...hey-ho, may as well deliver the package! We don't want our wages docked or anything now, do we?

In D/Generation, just about every room offers something of a different challenge, or some neat little way to use the laser gun which you fortunately find along the way -- more than just blasting enemies, it can bounce off of walls or travel through teleportation devices. You'll need to use these for the puzzle-based rooms, although there's plenty of other rooms where progress is merely a case of turning a bunch of abominations into anti-matter and saving one of the survivors of the attack from a somewhat grisly end. You do also have a quite limited supply of bombs, which can be useful -- simply because you can use them to blast through a door if you need to, thus getting yourself out of a puzzle you can't solve. They don't grow on trees, mind you.

The game was very well received at the time -- it earnt little but 90's and high 80's from most of the big magazines around, and Amiga Power actually rated it as the 40th best game in the whole history of the computer, which is no mean feat. And yet,D/Generation is largely forgotten these days...sometimes the isometrics can cause a few annoyances and it's quite the touch cookie, but it never managed to get too far past the Amiga's boundaries -- there is a PC version, but that's it. It's a surprise that no attempt was ever made to port it to a console, either by Mindscape or someone else -- it'd probably be better than some of the other Amiga ports we did see on the 16-bits, like Onslaught or Sword of Sodan. There is an HD remake of the game available on Steam, although reviews for this version are somewhat middling and thin on the ground. And so, D/Generation remains obscure, which is unfortunate -- as just like the courier in the game itself, most folks have no idea what's actually lurking within. Highly recommended.