What old SEGA games should be brought back from the dead? 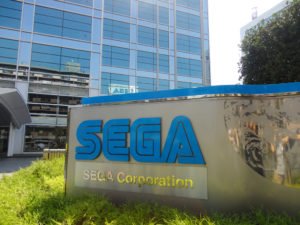 There certainly seems to be a lot of intrigue about what SEGA are up to lately -- there's talk of them bringing back some of their old IP's, for a start, which has certainly got some tongues wagging. Not to mention all the talk about something called SEGA Forever that could be (although we obviously don't know) a subscription-based sort of Games on Demand service for mobiles, which if true could perhaps cover the "bringing old games back" deal, depending on just how old SEGA are talking -- you can find some of the workings of the rumour mill on videos such as this one by Youtuber RGT 85 right here.  As far as anything concrete goes though, nothing is confirmed whatsoever, and chances are nothing will be until E3 at the earliest -- and as a highly distinguished retrogaming website it is quite frankly not cricket, or even baseball, for us to write an article all about this speculation that may well end up being untrue. I, for one, would never allow such things to appear on your computer screen.

With that said, the thought of SEGA digging up some of their old games from the dead is certainly worth having fun with, if only for the purposes of humour and light entertainment. So the question of today is; what old IP's could SEGA bring back? And what, exactly, could they do with them? It's all very well bringing a series back and doing the exact same thing that it originally became famous for -- that would be the sensible thing to do, perhaps -- but some IP's might need a bit of a twist. Let's review a selection from the archives and see how we can, for lack of a better expression, sex them up a bit. 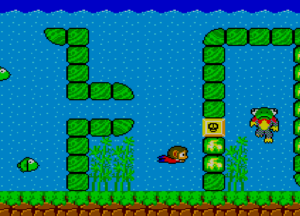 SEGA's pre-Sonic mascot has always had a bit of a raw deal -- we've actually got a fair bit of time for him in Europe due to the Master System's popularity here compared to the rest of the world, but even we just about managed to forget his existence once a certain spiky blue hedgehog came rolling in. It perhaps doesn't help his cause that Alex was pinged around genres a lot in his time -- there's a couple of Mario-esque platform games, a trial biking game, a crossover with Shinobi, a terrible adventure-action hybrid...he struggled to find a consistent identity, which was a bit of a bummer for him really -- however, that's something we can use to our advantage nowadays. SEGA have explored the depressive side of Alex Kidd before, using him as a lowly clerk in their self-referential Dreamcast game Segagaga, and perhaps this can be delved into further with a depressive, noir-esque action sandbox title where an older Alex with a drinking problem finds himself having to combat villains on the crime-infested streets of the Miracle World. Think Max Payne, only with more Janken -- it's a guaranteed hit. There could even be a role for Sonic too as Alex's unwilling, straighter-laced partner. 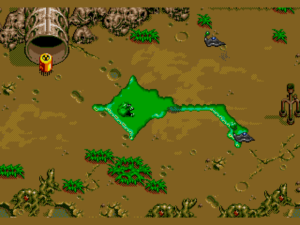 There's a fair few games that folks remember from the days of the SEGA Technical Institute -- those were the people who brought us the likes of Comix Zone, Kid Chameleon and Die Hard Arcade, games that people certainly remember well, and might even want to see make a return...however, everybody forgets about The Ooze.  There are a few reasons for that -- the first being that the game was, put bluntly, not very good. Secondly, it did come out pretty close to the end of the Mega Drive's life and so there weren't a whole lot of eyes on it. The premise was certainly weird enough -- you played as a scientist who had been turned into a giant blob of green goo, and was then tasked with getting revenge on the scum who'd put him in this situation...perhaps more could be done with this title? The roles could be reversed -- you play as one of the human scientists in a survival horror game. It's Alien: Isolation, only instead of a xenomorph you're hiding from a giant cartoony puddle of luminous snot...it might sound somewhat incongruous for a horror title, but people said that about IT back in the day too, and look what happened to them! It's worth looking at. 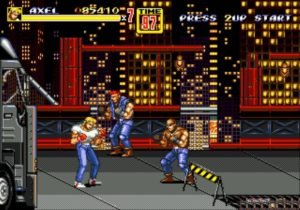 This should be the biggest lay-up of them all really -- as soon as speculation started about Sega reviving old IP's, Streets of Rage was undoubtedly one of the first names on people's lips. SOR used to be one of Sega's biggest franchises, but then it rather inexplicably disappeared, never coming out of the 16-bit era despite numerous failed attempts at a sequel and a bunch of dismissed plans. So just go ahead and make another beat-'em-up, right? Well...let's think outside the box a little. Streets of Rage is a very open title that can be interpreted in a variety of ways -- sure, it can describe a group of friends punching the teeth out of thugs in a battle against a crime syndicate, but what if a string of reality was brought in? Perhaps those streets could represent a city in crisis, possibly because it was invaded by a military force that needs to be repelled by another stronger military force that people like more. With that in mind, the best direction for Streets of Rage is surely an Army-based first-person shooter based in a foreign city, with questionable political content. Besides, everybody knows that beat-'em-ups don't sell anymore. 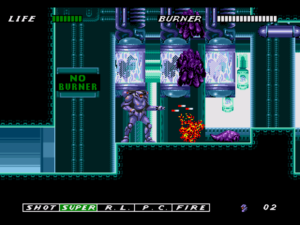 As far as old IP's go, any decision to revive ESWAT would come from right out of leftfield. The series only had 2 games, both of which had the same title, and it was never the most popular of SEGA's '80s arcade side-scrollers -- it was quite a lot like a game version of Robocop, but that itself already had a successful arcade game thanks to Data East...however, there could be something in that Robocop influence. It's something of a shame that there's no such thing as a proper Robocop simulator -- a big open-world city where you preserve the public trust, uphold the law and all that, solving crimes, chasing bad guys...it seems unlikely that we'll get anything like that out of Robocop itself, or a similar franchise like Judge Dredd, but you know what? Maybe ESWAT could be the way to do it. "Robocop simulator" is basically my dream game, so this is a suggestion that I'm actually half-serious about. 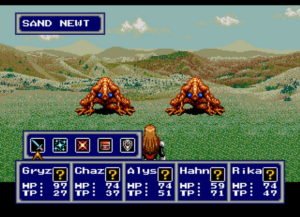 There's no need to be half-serious about this one, or even to make an attempt at being funny. For heaven's sake, folks -- give us another Phantasy Star. As in, a single-player RPG Phantasy Star. Even if it has to be crowdfunded. Please.

This could obviously continue on by looking at all of SEGA's old and discontinued IP's and thinking about ways in which they can be twisted and distorted to meet the demands of the modern gaming world, but it's probably wise to draw the line at five. While nothing here should be taken seriously as such, it is certainly an exciting time to be a SEGA fan -- there's definitely something brewing, and the possibility of games being revived has certainly excited people to a degree that may well end up being too much, but in the meantime is still a positive for a brand that, not too long ago, was often thought to be a bit of a zombie. Whatever happens, whether it's something beyond our wildest expectations or just another way to play those old games that lots of people love, it's good to see people being interested again.