Judge Dredd and the absence of generic licensed fluff on consoles 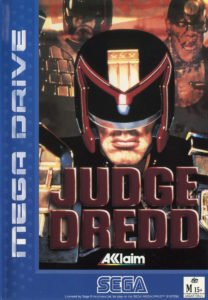 As it often is, Friday is another video day on the Kim Justice channel -- and today's is about Judge Dredd, published by Acclaim and Probe in 1995 for the Mega Drive and SNES. The game is, of course, based primarily on the terrible 1995 movie adaptation of Dredd -- y'know, the one with all the "I AM THE LAW" memes -- and it isn't what anyone would call good. It's a generic piece of licensed rubbish, a side-scrolling affair with generic backgrounds from the movie, average controls, and nothing much interesting for the most part...you don't see too many games like this anymore, which oddly enough is something that I rather miss about gaming these days.

Licensed games that tie-in with some popular star or movie or TV show etc. are one of my favourite subjects in gaming -- even if the quality is often average, some games have their moments (plenty more are legitimately very good) and I love seeing how a studio translates something like a big action flick into a traditional video game. Unfortunately, these sort of games aren't as common as they used to be -- tie-in games do exist still, but they often fit into a couple of categories: There's the well established tie-in series such as the LEGO games, which are very good and working off a strict formula. For less famous IP's, licensed games do exist still but they seem to be making their home more and more on smartphones these days, as opposed to consoles -- which is a bit of a shame. Who wouldn't want to see a proper game of the upcoming Baywatch movie on their PS4? Don't kid yourself -- you'd be curious at the very least. The amount of licensed games potentially starring Dwayne "The Rock" Johnson that we've missed out on is an outrage.

Digression aside, Judge Dredd is one of the more unfortunate IP's out there when it comes to licensed games -- it's had some pretty miserable efforts in the past. This 1995 game is far from the worst - there's a 1991 game by Virgin for home computers that makes this generic maze level-based platformer look like Super Metroid by comparison. Really, Dredd never got anything close to a decent game until the release of Dredd vs Death in 2003 by Rebellion Developments (who actually own the 2000 AD comic outright these days, including the Judge) - an FPS that certainly did the best job so far of capturing the Dredd universe. It's funny, really -- one of the odd things about licensed games seems to be that the simpler an IP should be to adapt to a game, the easier it is to screw up. Judge Dredd is a powerful lawman who goes around shooting and arresting creeps in a post-apocalyptic universe -- is that really difficult to adapt? It turns out that yes, it is.

There are some more intriguing things about this 1995 effort, mind you. With very little in the way of action to work with in the 1995 movie (seriously, it's really bad) the game decides to divert totally from the movie halfway through in terms of plot. The first half takes in all the events from the movie, ending with the corrupt Judge Rico's demise atop the Statue of Liberty, but then the second half has Dredd fight the Dark Judges (Fire, Fear, Mortis and Judge Death), who are more traditional antagonists. This half is not based on the film, nor is it based on anything that happened in the "Lawman of the Future" comic series that spun off from it -- and so naturally is a little more interesting in terms of levels and design as Probe work directly off the comic book...the play's still not very interesting, mind you. Judge Dredd isn't exactly a game that's worth the time to check out on the whole, but it is a good example of a game that, sadly, you simply don't get anymore. It's almost a shame that console games are, on average, too good these days for something like Dredd to exist.