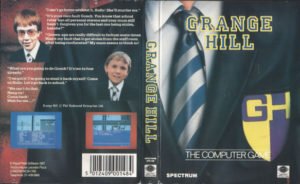 The advent of the point-and-click adventure really changed a lot of things for PC gaming, didn't it? Suddenly there was fancy graphics for the time, interesting stories, annoying puzzles -- all sorts of things that make it a great development. Alas, we didn't have all that much like it on the Spectrum -- although that's not to say we didn't try. Aside from all the text adventures that were released on the system (and could easily be made with programs like Quill), there was the odd side-scrolling adventure, such as Gargoyle Games' celebrated Tir Na Nog and Dun Darach, filled with Ye Olde English and Celtic mythos, or - in the RPG mold - you had Mike Singleton's seminal The Lords of Midnight and Dark Sceptre...these are all great games, none of which I intend to talk about. Instead, I intend to talk about Grange Hill, a side-scrolling adventure based on a BBC kids' show set in a secondary school.

In Grange Hill, you - the wonderfully named Gonch - and your friend Hollo have to go on an epic after-school adventure from your house back to school in order to break in and retrieve your expensive new walkman, which was confiscated during the course of the day. Along the way you will meet some interesting characters -- there's Mr. Griffiths, the curmudgeonly old caretaker who's sick of pupils hanging around the bins, Imelda the somewhat stroppy fellow pupil who wants a word with you, and the mysterious pusher who, if you say "yes" to his offer, is responsible for one of the starkest and most depressing deaths in computer game history -- that can be seen in the picture below.

The game itself isn't without its charm, especially if you so happened to grow up with Grange Hill at any point -- the time that I spent with the long-running BBC series was in the mid '90s, a few years removed from the glory days that this game represented, but it was still a fair enough after-school watch. The game's not without its massive frustrations though - why, there's a box of matches that requires a very specific text string (from an oversensitive keyboard) to obtain! There's a set of false teeth positioned just so that if you walk on the next screen instead of jumping on them, you'll die immediately because they apparently bite you to death. And of course, there's Hollo -- your friend, who always stops following you and says the whole thing's a waste of time, meaning that you have to type in "Come on Hollo" every couple of screens or so as you need him for the walkman...that's kind of annoying.

So...it's a little difficult for me to actually recommend Grange Hill as such -- it's a very flawed and quite basic adventure game, complete with a license and a general style that never caught on...it's still one of my favourite games from the Spectrum era though, if only because it was one that I'd always play with my dad -- we'd spend ages trying to beat it, usually getting stuck on the damn matches which was unbelievably simple in the end...we'd end up typing in all these elaborate strings when the one we needed was "throw plane at matches" (a paper one, obviously). We never beat it then, which perhaps goes to show how rubbish we both were at actually playing games, and while I'd probably give us fair odds on being able to do it now it wouldn't be all that fun. And it's worth it for that ridiculous death alone, to be honest. Just say no, kids!