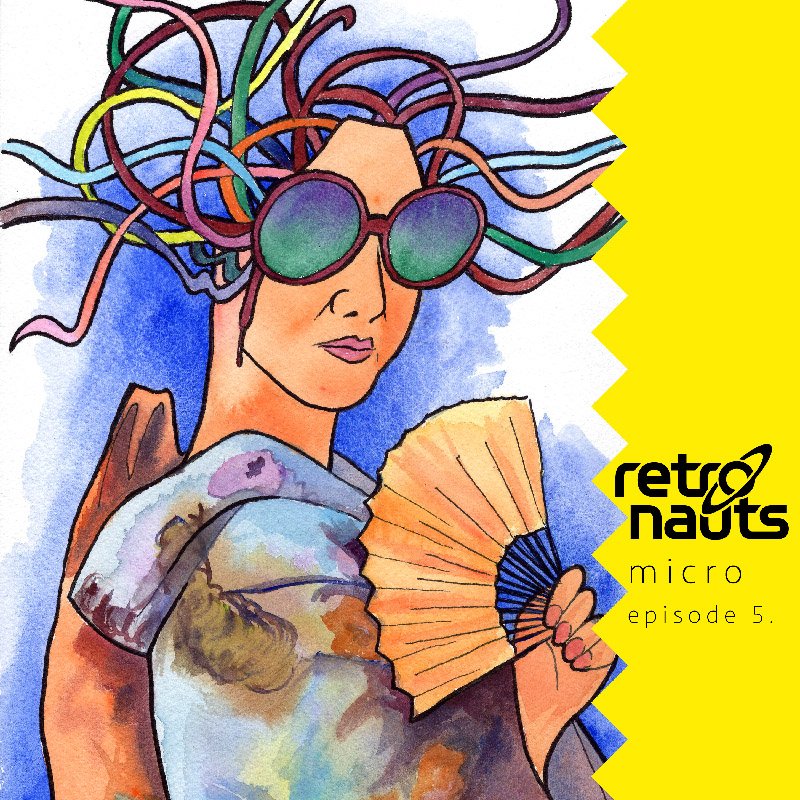 I've talked about pioneering Japanese electronic band Yellow Magic Orchestra on Retronauts before. But never before to the exclusion of all else. But that's what the latest Micro episode is all about: YMO, baby.

As usual, you can read more about this week's episode at USgamer.

(I've also sneakily included the full script for this episode here behind the cut. Hi. You found it!)

Have you ever heard a band for the first time, only to find their music already feels intimately familiar? For me, that experience happened a few years ago when I picked up a couple of albums by Yellow Magic Orchestra.

Fans of Japanese game music probably know the name YMO — they've been a huge influence on several decades of game composers. More recently, they've helped inspire bands like Anamanaguchi and the decidedly referential YMCK. The connection should come as no surprise. While other musical acts had attempted to incorporate video game sounds into their music as a touch of novelty (which, in the late '70s, is basically what video games were seen as), YMO made it their mission to build their entire sound around the essence of video games.

Compare Gentle Giant's "Time to Kill," which began with Pong sounds in what felt like a bungled attempt to reproduce the cash-register effect of Pink Floyd's "Money," to YMO's "Computer Game: Theme from the Circus," the first track on their 1978 debut album. Gentle Giant's was a sort of halfhearted endeavor that tied into the lyrics but nothing to improve the music. YMO's work, on the other hand, made the musical stings and dirges of Exidy's Circus an integral component of the track, building rhythms and melodies around the sounds of the computer chip and treating the game audio as a sort of leitmotif.

With its upbeat electronic melodies and sharp synthetic rhythms, YMO felt like some sort of video game concept band from the very beginning — I'd call it "Tommy meets Tron," except YMO created most of their recordings long before Disney's movie even existed. It didn't hurt that the band came together just as Space Invaders mania swept Japan; their eponymous debut album even included a sample of/homage to Space Invaders in a thematic reiteration of "Computer Game: Theme from the Circus."

It would be easy to write off YMO as a precursor to Western video game novelty acts like Buckner & Garcia but for the fact that the band's three members — Ryuichi Sakamoto, Haruomi Hosono, and Yukihiro Takahashi — were near virtuosos with impressive discographies up their respective sleeves. Rather than simply creating goofy little tunes about video games, the trio instead tapped into the spirit of video games, the blooming computer market, and the future-facing zeitgeist of bubble-era Japan to create music that drew on electronic entertainment and fed back into the medium by influencing those who would follow.

With their heavy use of drum machines, Moogs, and other synthesizers, YMO attempted to give life to tightly structured compositions, removing the unpredictable variances of human performance from their work with early sequencing technology. In many ways, the eight albums they recorded between 1978 and 1983 reflect the rapidly shifting nature of the video games they emulated, as the sound they created grew in complexity and precision with each new release.

The band's first album has an almost brittle sound, while later releases demonstrate greater layering and richness of sound. 1979's "Solid State Survivor" may be the band's definitive work; it lacks the overt game sampling of the band's first album, but at the same time it feels more like what we think of as '80s and '90s game music. "Rydeen" sounds like a lost stage theme from Street Fighter II, while the atmospheric "Castalia" could be mistaken for a late-game dungeon theme in some PlayStation-era RPG. YMO's use of vocoders and similar audio processing technology even resembles the sampling and voice synthesis of '80s video games, from the low-fi pop of SNK's "Psycho Soldier" to the froglike croak of the voice modules for Intellivision and TI-99/4A.

Not surprisingly, Japanese composers are typically quite up-front about their affection for and the influence on their work of YMO. I've only ever heard one person in the games industry speak in less than glowing terms about Yellow Magic Orchestra — former Final Fantasy composer Nobuo Uematsu. When I mentioned them to Uematsu a few years back, he gave one of those "Oh, you amateur" looks and patiently explained that everything YMO did had been done first and possibly better by German band Kraftwerk. He's the original video game music hipster!

But he's not entirely wrong; by most accounts, YMO was influenced heavily by Kraftwerk, and then later by American New Wave bands like Devo and The Talking Heads. Nevertheless, like all great artists, YMO synthesized its disparate influences into something unique, combining synth-pop, video games, and an almost facetious spirit of Orientalism into a memorable mix whose style continues to resonate through countless game soundtracks even today, nearly four decades later.

Yellow Magic Orchestra may never have contributed music directly to a video game, but no lover of classic game music should be without a few YMO albums in their collection.