It's been almost five years since the release of the NES Classic Mini, Nintendo's would-be holiday stopgap turned smash electronic toy, and since that time we've been inundated with a cavalcade of miniature and not-so-miniature playable video game replicas, including competing plug-and-play mini consoles and tabletop arcade cabinets directly from the likes of Sega, Konami and SNK, ever-so-slightly-more-compact replica arcade cabinets from vendors like Arcade1UP, cartridge-based systems like Evercade and even that big ol' Capcom logo with buttons on... and now, a little late but no less welcome, Taito's upping the plug-and-play arms race with the Egret II Mini, a playable miniaturized version of their ubiquitous Egret II arcade chassis with dozens of games, some extravagant new features and that premium price that Taito maniacs have come to tolerate.

At a glance, the Egret II Mini looks remarkably similar to last year's Astro City Mini from Sega: it's a miniature tabletop arcade machine with a working display and stereo speakers, replaceable marquee and micro-switched joystick & six-button control layout, that comes equipped with HDMI out, two USB ports for external controllers (an arcade stick and pad) and a headphone jack alongside the power socket and a SD card slot, which I'll get into later. (The dimensions are 155mm x 200mm x 209mm wide/deep/high, so it's substantially taller and a little girthier than the Astro City Mini.) What sets it apart, however, are some of the extra design touches: the 5-inch screen — genuinely sized at 4:3 ratio — can be twisted and rotated vertically in order to play games that originally displayed on vertical monitors, and the stick can be manually locked to accept 4-or 8-directional inputs for added per-game authenticity. (Much of the Egret II Mini's two-and-a-half-year pre-production phase was spent ensuring these non-negotiable features could be implemented, apparently.)

Of course, the games themselves are the real attraction, and for those of you who are pondering whether a company with a relatively low international profile like Taito could possibly offer enough games to compete with the likes of Nintendo and Sega, rest assured: whether you're familiar or not, the Egret II Mini contains 40 classics, curios and cult cuts spanning the late '70s to the mid-'90s, many of which have never been reissued before. For the complete unfamiliar, I recommend watching the overview trailer:

In essence, they've grabbed a varied and carefully-curated selection of games that focuses on fan favorites, highly-requested reissues and deep cuts that deserve wider accessibility and modern-reappraisal — many of the late-'70s/early-'80s games in particular were chosen not just due to their scarcity but were hand-picked due to their forward-thinking ideas that set them apart from the multitude of other titles Taito released during this era that many would struggle to play today. Several of these games have never been officially reissued and some have never been emulated or even dumped before, and Dan-Ku-Ga — the Champion Edition-style upgrade to Kaiser Knuckle that never made it past location test, and the equivalent to Nintendo's Starfox 2 or Sega's Tetris MD — was never even officially released (but again, like Starfox 2, is something fans have had access to, in one form or another, for quite a while). Even just within this twenty-year window, Taito put out a lot of arcade games, and while they were never going to be able to include every game one might hope for, they've assembled an admirable list of games that puts playability ahead of mere antecedent: sure, there are lots of seminal games here, but damn near every one's a banger, and they've even gone to the lengths of licensing games like Kyuukyoku Tiger and TATSUJIN (which aren't Taito games!) and Lupin III (which may or may not be the first ever officially-licensed video game adaptation of an existing media property, and one that just so happens to currently be part of the Sega corporate family).

...but of course, there's more: should you buy the additional Expansion Set, you'll gain access to an additional 10 games via dedicated SD card:

The Expansion Set includes the external USB controller pictured below — all ten of these games require the use of either a paddle/spinner or a trackball input, hence their exclusivity to this optional bundle. As for additional game expansions via SD card, nothing's been announced or promised, but the producer has suggested they'd like to find a way to make available some of the games that couldn't be cleared in time to be included on the main unit, and one would have to imagine that's how they'd do it. (One such title: Cleopatra Fortune!) 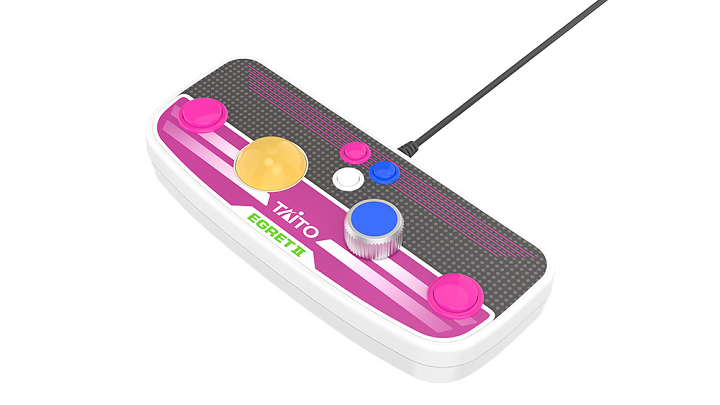 On the software side, we don't know a lot about the feature suite just yet: there are dip-switches per title, pre-set rapid fire buttons for certain games and three save states per game, but Taito has yet to share details on the display settings, or whether it'll include re-mappable controls or selectable ROMs per game, or even an English front-end. The team behind the software hasn't been disclosed, either: we can infer that it's not being handled by frequent collaborator Gotch, as they're busy working on a separate arcade reissue project for Taito, so it may very well be the work of their other frequent collaborator M2, whose work graced the Mega Drive and TurboGrafx-16 Minis, as well as Taito's own recent Darius Cozmic Collection for PS4 and Switch. (The menu music, composed by ZUNTATA alum Yukiharu Urita and played in the above trailer, was written using the sounds of Taito's distinctive late-'90s MSM5232 sound chip,)

At this point in time, the Egret II Mini has only been announced for release in Japan, and it's not cheap: the standard unit will set you back ¥18,678 (~$170 USD). while the system + Expansion Set bundle, and the deluxe bundle with Expansion Set and additional arcade stick and pad cost ¥32,978 (~$300 USD) and 49,478 (~$450 USD), respectively; each bundle also includes a multi-disc CD soundtrack and a set of 50 replica how-to-play cards, and the deluxe bundle also includes a 160-page strategy guide. The Expansion Set, arcade stick and pad can each be purchased individually for ¥12,078 (~$110 USD), ¥8,778 (~$80 USD) and ¥3,278 (~$30 USD), respectively, and you'll need one of those external controllers if you want to play any of these games with two players. (Amazon Japan's exorbitant listed shipping price is, as far as I'm aware, a placeholder that will be reduced to something more realistic once the items are actually ready to ship, but don't quote me on that.)

(Incidentally, that strategy guide has been promoted as promising the answers to a hotly-debated but ultimately inconsequential detail surrounding Taito's mid-'80s arcade hit, Chack'n Pop: while most every Japanese home conversion of the game wrote the title using hiragana, the title of the arcade version was never officially designated in either hiragana nor katakana, and reissues have flip-flopped between either notation, with the hiragana notation being more common; for the Egret II Mini reissue, they're listing the title in katakana, even as a separate upcoming Switch reissue sticks to hiragana, and the Egret II Mini producer has promised to defend and justify this incredibly audacious decision within the pages of the strategy guide included in that $450 deluxe package. Taito's gotta Taito!)

The Egret II Mini is scheduled to go on sale on March 2, 2022, and I have a hunch it'll be announced for official international release well before then, but either way, you have plenty of time to decide whether or not to take the plunge. Are you all mini'd out? Does the rotatable screen and additional input options justify the Taito Tax? Are you as disappointed at the exclusion of Dead Connection as I am? Let us know in the comments.