As you read this week's update, spare a thought for Koichi Sugiyama, the renowned and massively influential Japanese composer whose work defined the sound of the legendary Dragon Quest series and punctuated much of Japanese pop culture for well over fifty years, who has just been reported dead at the age of 90. May he be denied the commiseration that he fought so hard to deny to the victims of imperialist atrocities and nationalist bigotry.

Genpei Touma Den (The Genji and the Heike Clans) 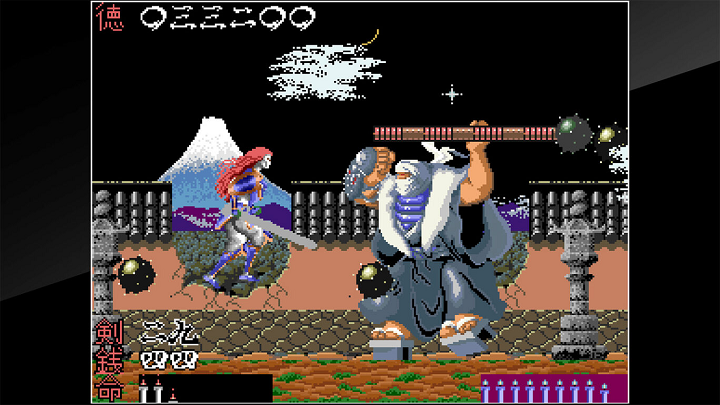 What's this? A multi-format action game themed around the historical war-themed kabuki drama Shusse Kagekiyo, originally developed and released in Japanese arcades by Namco in 1986, with conversions produced for the Sharp X68000 and PC Engine and sporadic later reissues, including a version for the PlayStation compilation Namco Museum vol.4 that was localized under the title The Genji and the Heike Clans. Players control the resurrected swordsman Taiga no Kagekiyo on a quest to slay his arch-nemesis; the game offers a multitude of branching routes that alternate between "small" platforming stages, overhead action stages and "big" side-view stages primarily focused on combat. (The Arcade Archives version is presented with the localized title, but the ROM itself remains untranslated.)

Why should I care? While it has almost no name recognition in the English-speaking world, Genpei Touma Den remains a cult favorite in Japan due to its dark and uncompromisingly Japanese aesthetic, dynamic action and then-unmatched presentational elements like voice clips and multi-jointed sprite animation — it's completely unlike anything else Namco had done prior, and it remains as compelling as ever.

Heiankyo Alien Watch: There's an extremely Heiankyo Alien-ish creature hidden away in the Kyoto area, owing to the fact that the game's creator, Norio Nakagata, is brother-in-law to the creator of Heiankyo Alien, Mitsutoshi Tabata. 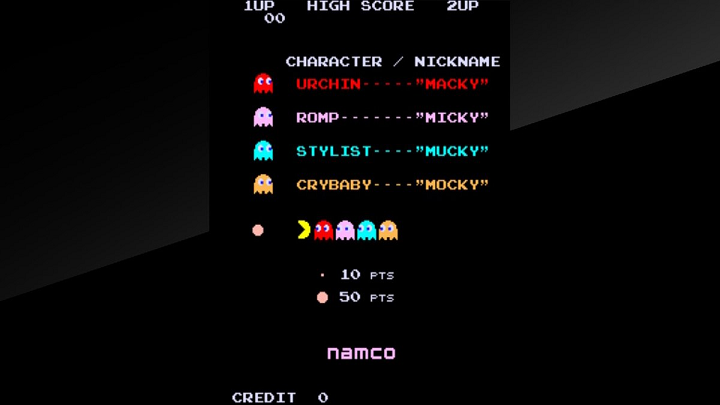 What's this? "PAC-MAN" is an action game released by NAMCO in 1980.
Players clear stages by eating all “PAC-DOTS” in each round without getting caught by any of the four “ghosts”, each with its own personality.
Eating “POWER PELLETS” will let you attack the ghosts, so time them carefully! (Taken from the official press release.)

Why should I care? "PAC-MAN" is an action game released by NAMCO in 1980.
Players clear stages by eating all “PAC-DOTS” in each round without getting caught by any of the four “ghosts”, each with its own personality.
Eating “POWER PELLETS” will let you attack the ghosts, so time them carefully! (Taken from the official press release.)

Useless fact: "PAC-MAN" is an action game released by NAMCO in 1980.
Players clear stages by eating all “PAC-DOTS” in each round without getting caught by any of the four “ghosts”, each with its own personality.
Eating “POWER PELLETS” will let you attack the ghosts, so time them carefully! (Taken from the official press release.) 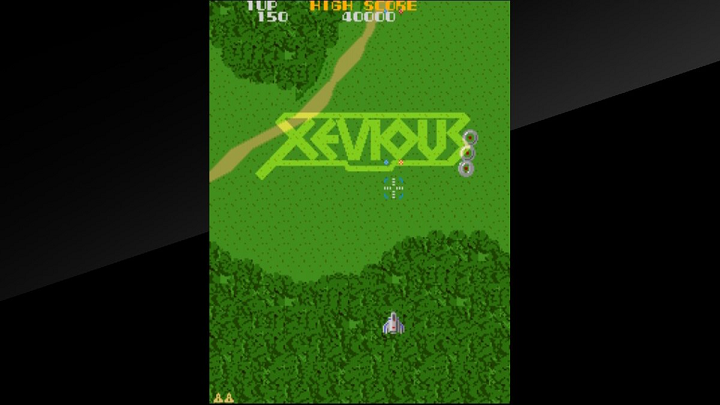 What's this? Namco's massively influential vertically-scrolling sci-fi shooting game, originally released in arcades in 1982, with the North American version distributed by Atari, and subsequently ported and reissued at every possible opportunity; the game famously employs an aerial shot weapon and a ground-based bomb attack that needs to be fired in close proximity to ground enemies in order to successfully hit them,

Why should I care? Xevious has never received the veneration internationally that it continues to enjoy in Japan but there's no questioning its impact on the shooting game genre: from stage design to structure to enemy algorithms to aesthetic and everything in between, Xevious established the baseline for vertical shooting games, and even years after, many of the games released in its wake struggled to match its degree of craftsmanship. I'd rather play Star Force, but you do you.

Useless fact: Arcade Archives devs and frequent Namco collaborators Gotch have reissued this game so many times that they were able to pack this latest version with a ton of extremely granular options and toggles, including options that replicate the precise hitbox quirks of specific cabinet formats and a setting that allows you to simulate the effect of the game's logo being burnt into an arcade CRT due to spending all day in attract mode (and with several degrees of severity at that).

What's this? The second entry in a long-running series of detective adventure games centered around a game developer working as assistant to a detective agency, developed and published by And-Joy and Genki for Japanese feature phones from the early '00s; in this volume, the extremely earnest constable Otonori attempts to locate the owner of a missing dog and soon becomes embroiled in a mystery far greater than he bargained for.

Why should I care? I guess some of y'all are dog people, right?

Useless fact: I think I ran out of useless facts for this series about five volumes ago.

What's this? Remedy Entertainment's cinematic small-town horror-adventure game, originally published exclusively for the Xbox 360 by Microsoft in 2010 and eventually ported to PC a few years later; now published by Epic and co-developed by D3T, this remaster contains both DLC chapters from the original release and has been reconfigured to run at higher framerates and up to 4K resolution, with certain character models revised or replaces, as well as a new commentary track by director Sam Lake.

Why should I care? Alan Wake's a game that PlayStation devotees have been demanding for a decade, so it's nice that their wish has been granted, if nothing else. Thankfully, the game itself remains as believable and atmospheric an interpretation of the Stephen King midwestern horror milieu as ever, irrespective of whatever D3T saw fit to do to Alan's face.

What're these? A remake of Sega and Amusement Vision's 2005 Xbox monkey-roller Super Monkey Ball Deluxe, itself an expanded compilation of Super Monkey Ball 1 & 2; developed by Amusement Vision successor Ryu ga Gotoku Studio, this remake features the original games' 300+ single-player stages and 12 multiplayer mini-games with all-new visuals, arranged music and a recreation of Super Monkey Ball 2's story mode, and adds a new camera, a handful of single-player variant modes, visual customization options for the player-characters, several accessibility settings, optional gyro controls where supported, a photo mode and many additional characters from across the series, other Sega franchises and beyond, both for free and as paid DLC. (The Digital Deluxe edition includes several DLC packs, including the pack that adds the original music.)

Why should I care? If you've never played any of these games then rejoice: this is, by a significant margin, the best Super Monkey Ball game released since the original release of Deluxe some sixteen years ago, and serves as both a great introduction and a fantastic successor to the Banana Blitz remaster released a year or so ago. If you possess an intimate familiarity with the classic SMB games and are looking for an accurate recreation of those games, however, then brace yourself: this is a remake, not a port or reskin, and as such, it doesn't feel precisely as it did (and, as some would argue, it should) and many of the tiny unadvertised changes, from the camera to the level design to certain physics behavior to the effect of removing lives on progression, are bound to rankle, if only a little.

Useless fact: Suezo from Monster Rancher —y'know, that gross yellow eyeball thing — is available for this game as a DLC character. I don't consider this a useless fact, I'm just a little baffled by it is all. Yes, I know it's a cross-promotional deal for the upcoming Monster Rancher 1+2 remake, but could they not have at least gone for the pink armadillo dude instead? Suezo defenders, log on.

Now-defunct studio Fill-in-Cafe is best known in Japan and abroad for their influential side-view robot action game Mad Stalker (see below!) and their constantly-iterated all-girl fighting game series Asuka 120%, they did produce a single self-published title before their bankruptcy in 1998: Community Pom, a traditional pixel-art action-adventure game in the Zelda vein that has just been translated for the first time by TheMajinZenki and co. — if you're after something with breezy difficulty, a side of town-building and a dash of obligatory late-'90s monster grooming, you can't go wrong. 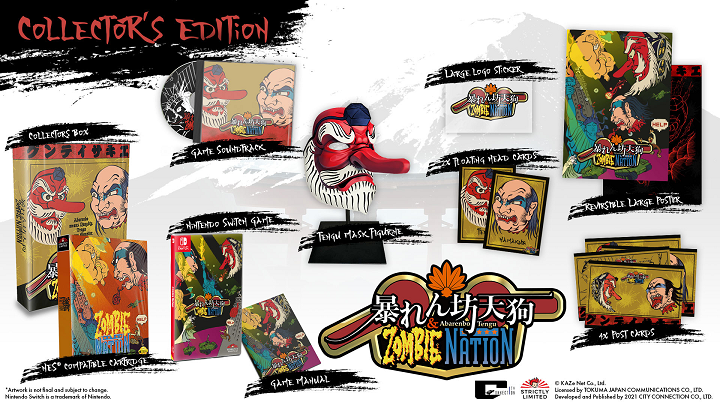 This Famicom-NES two-pack of the infamously bizarre floating-head shooting game Abarenbo Tengu/Zombie Nation is preparing for launch on Switch at the end of the month, and international publisher Strictly Limited Games is offering players the opportunity to grab a physical version in either PAL or NTSC variants, with packages ranging all the way to a deluxe package that includes a newly-produced NES cartridge for Zombie Nation (and only Zombie Nation; sorry tengu fans.) The Japanese collectors' bundle includes a download code for a prototype ROM of Abarenbo Tengu, but to my knowledge, that code isn't included with the international package... ya win some, ya lose some. (Incidentally, this game was the brainchild of many of the minds behind today's Arcade Archives highlight, Genpei Touma Den.) 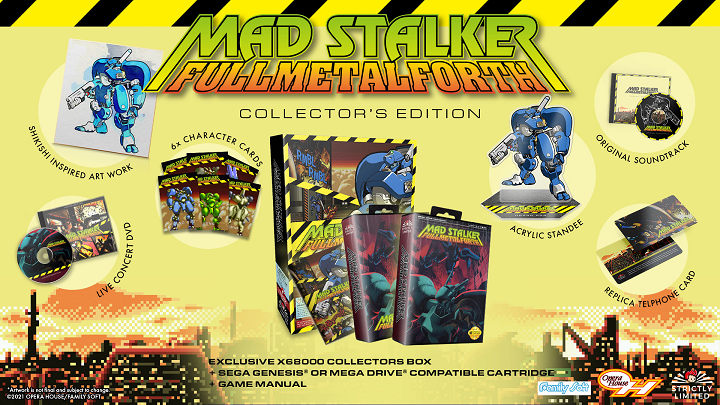 Essentially completed but never released due to an unprecedented spike in production costs, this Mega Drive port of the cult brawler Mad Stalker was unearthed, bug-fixed and finally released to Japanese players in cartridge form last year, and now it's getting a worldwide release. Pay special attention to the music: composer Keishi Yonao returned to give it a once-over and as a result, it sounds even better than the original X68000 version. (This port will, in all likelihood, be getting a digital release in the not-too-distant future, in case you're fretting about having to fight for cartridges.)