It's not my place to declare an unreleased and barely-finished Jaguar CD game more worthy of acknowledgement than a remaster of three of the most popular, critically-lauded and influential games of their era, but fortunately for all of us, ain't none of yall gonna stop me. 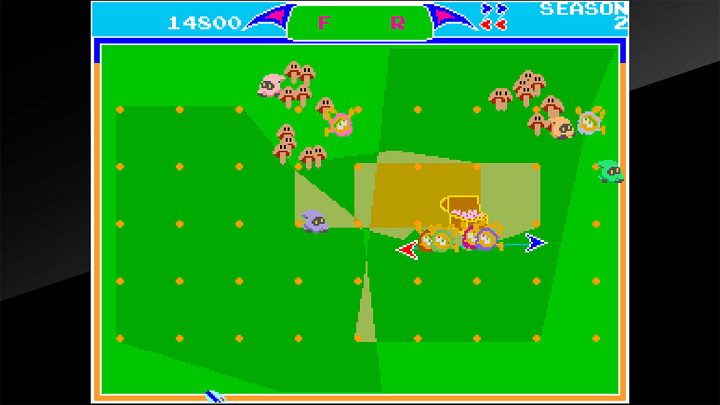 What's this? A somewhat cerebral action game with a novel twin-stick control scheme, originally developed and distributed in Japanese arcades in 1983, with conversions produced for Sharp X68000 and Super Famicom and an emulated versions released for the Japanese Virtual Console Arcade in 2009. The two sticks control Libble and Rabble, respectively, who are connected by a line that the player need to use to encircle the requisite amount of collectibles in each of the peg-filled stages; enemies can also be destroyed or delayed by being circled, and there are also hidden treasures that, when cleanly and accurate circled, will release bonus critters that will allow the player to access a bonus stage,

Why should I care? Libble Rabble is a game whose peculiar control scheme and technically-advanced line-drawing technology made it both a tough sell in arcades and a difficult prospect for contemporary home ports, but it's something modern audiences will have no problem playing or appreciating; it's a genuine unsung classic of the Namco "golden era", and one of the very few post-Pac-Man games designed by Toru Iwatani.

Useless fact: November 11 is colloquially celebrated as "Twin Stick Day" among Japanese gaming dorks, so it's only fitting that Hamster held onto it until today.

What's this? The first modern console release of a canceled FMV game developed by Inter-Active Productions and targeted at the Atari Jaguar CD via an interactive movie format created by Atari called "GameFilm"; the game was scrapped due to the failure of the Jaguar, with a later attempt to release it as a standalone linear movie also aborted due to editing issues and ultimately treated as an insurance write-off. This version boasts new additional voice-overs by original star Timothy Bottoms that aim to plug holes in the script caused by missing or unfilmed scenes.

Why should I care? I should hope the above trailer provides a decisive answer to this question..

Helpful: This game, in both software form and various film cuts, as well as the large majority of the source code for Atari's "GameFilm" format, have been floating around online, commercially and non-commercially, for the better part of twenty years, and you can go watch the whole thing on Youtube right now if you so desire.

What's this? A dual port and HD remake of the original entry in Success' cult shooting game series starring the cute witch Cotton, originally released in arcades via Sega's 16B arcade board and subsequently ported and converted to a variety of platforms, with the most recent reissue being the Astro City Mini. The standard mode of Cotton Reboot is specifically based on the Sharp X68000 version of the original game, which has long been considered a director's cut of sorts, while the arrange mode has been remade and reconfigured for 16:9 widescreen and features brand-new high-resolution 2D visuals, a new modern scoring system, an arranged soundtrack by an all-star assortment of game composers and voice-acted characters and cutscenes.

Why should I care? Of the many, many Cotton-related games released over the last little while, this is the place to start: it's the most conventional, is the least burdened by technical issues (spartan PC-specific options notwithstanding) and offers the most flexibility for players of all skill levels without feeling neutered or otherwise handicapped. (It also benefits from some of the post-launch updates produced for the console versions a few months ago, which include extra playable characters and crucial visibility changes for the arrange mode).

Helpful tip: If you really, really want to narrow down your Cotton-related investments to a single game, there's a brand-new game titled Cotton Fantasy (Cotton Rock'n Roll in Japan) due out at the end of the year, and Strictly Limited Games is taking orders for international physical collectors' versions this weekend.

What's this? The latest "pixel remaster" from the classic Final Fantasy sextet, this one based on the 1992 Super Famicom entry Final Fantasy V, which was officially localized for the first time as part of the PlayStation Final Fantasy Anthology in 1999 and subsequently for Game Boy Advance and a later mobile port; this version, based on the contents of the SFC original, features a newly-arranged soundtrack, a new UI, an auto-battle feature, a bestiary and art/music galleries and, of course, remastered pixel art supervised by long-time Square pixel artisan Kazuko Shibuya.

Why should I care? FFV is easily the most systemically ambitious and flexible game of the 16-bit FF trilogy while also being the first game in the series to firmly establish the narrative cadences that would come to define the team's output for the better part of the next decade — in many ways, it's the perfect bridging point between what FF was and what it mostly continues to be.

Square-Enix Bug Report: Oh, there are bugs, but they're mostly confined to the intricacies of certain battle abilities and not the constant crashing one might've expected from releases of years past.

What's this? A collection of "definitive" remasters of Rockstar Games' generation-defining 3D open-world mayhem playsets, originally released for the PlayStation 2 and Xbox across the early-to-mid '00s and later updated for smartphones, PlayStation consoles and PC; these versions promise modern high-resolution textures, shaders and lighting at up to 60FPS and 4K resolution, with a revised control scheme based on that of the omnipopular GTAV, a revised mini-map and UI, changes to mission structure (instant restarts!) and platform-specific enhancements like gyro and touch-screen options on Switch.

Why should I care? Eh, I was more of a True Crime dude.

Helpful tip: If your evaluation of "definitive" hinges solely on whether these versions retain certain licensed tunes then I urge you to check this list of missing tunes, because they've left off a whole bunch of 'em.

What's this? A horizontal shooting game with a heaven-versus-hell motif, originally developed and published for the Sega Mega Drive/Genesis in 1991 and reissued on the Japanese Wii Virtual Console in 2008; this version comes courtesy of Ratalaika Games, whose recent emulated reissues include Turrican Flashback and Gleylancer, includes some robust shaders and screen filters, a rewind feature, save states and toggles for various cheat modes including invincibility. (You Genesis kiddies might remember this game as Wings of Wor.)

Why should I care? You have a hankering for some grotesque and unabashedly phallic boss designs, and you're curious to experience what passed for cutting-edge bullet patterns in 1991.

Useless fact: Gynoug features increasingly brusque congratulation messages for clearing the game on successive difficulties and loops, and I can only presume this version no longer yells FUCK YOU at those who clear the second loop of the highest difficulty setting... but, I haven't tested it, so I may very well be wrong.

What's this? A port of Bioware's lauded Star Wars role-playing game, originally released for Xbox and PC in 2003 and ported to Mac and smartphones a decade later; to my knowledge, this Switch port is essentially identical to those smartphones ports and doesn't add much in the way of new features, save for improved controller support over the source PC version.

Why should I care? Presuming this port launches in an adequate state (and given previous Aspyr console ports, this is far from a given), this version offers the most complete package in terms of content and console-tailored playability while (ideally, at least) allowing players to sidestep the notorious technical hurdles required to play the PC version with any degree of security. As for the game itself, it continues to be lauded as perhaps the most substantial and credible exploration of the Star Wars mythos in videogame form and, from what I understand, it's unique in that the contents of the series are gradually being reintroduced into canon, as opposed to other excised extended-universe media that continues to be relegated to footnotes on fan wikis.

I'll probably forget to mention these next week, so... any North American Star Wars fans may want to pick up the retail double-packs of recent Star Wars Switch game ports that are due out next week: there's a Jedi Knight double-pack and a Star Wars Racer/Republic Commando bundle.

Sega's Sakura Taisen was such a hit on Sega Saturn that their ambitions for the series quickly eclipsed any sort of commitment to their own hardware, and after some courting by one-time Nintendo go-between Marigul, the series saw not one but two handheld entries for the Game Boy Color; this first one, released alongside a limited sakura-pink GBC, admirably adapts the original game's LIPS dialogue system for 8-bit hardware, and this new patch not only translates the game but adds several quality-of-life features and implements certain dialog branches and endings that were present in the ROM but, for whatever reason, not present in the released game.

OH YEAH, THEY'RE STILL DOING THESE

Hot(?) off the heels of the Mario-themed pretend-G&W unit comes this Zelda-themed unit which contains playable, multi-region versions of OG Zelda, Zelda II and Link's Awakening (the original black-and-white version, not the colorized DX version), on top of a Link-ified recreation of the Game & Watch game Vermin and interactive clock and timer apps, as well as some as-yet-unrevealed button commands to unlock hidden features in the included games. Cute, I guess, but shouldn't it be themed after the actual Zelda Game & Watch? Y'all can afford to pony up for the multi-screen, Nintendo.