Moreso than the usual roundup, this week's update is packed with games that are bound to strike a chord with a specific generation of crate-diggers who stared longingly at untranslated screenshots of games they were all but convinced they'd never get to see running, let alone play... and what's even more amazing is that most of them actually live up to expectations, and the ones that doesn't still offers Shinichi Sakamoto music, so it's far from a bust. 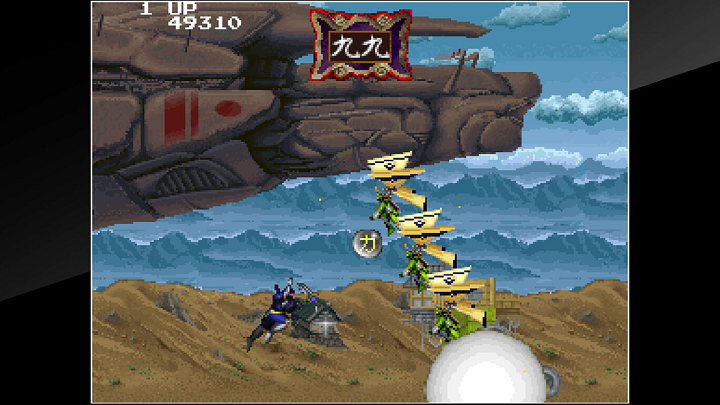 What's this? A side-scrolling ninja action game developed in conjunction with a live-action special effects film by Namco and released exclusively in Japanese arcades in late 1988; set in a world that merges the near future with motifs from the warring states era, players are tasked with slashing, hurling shurikens and running at high speed through each stage in order to rescue a princess for reasons that probably won't be evident to anyone who didn't watch the movie.

Why should I care? This is a first-ever home port that demonstrates Hamster's commitment to honoring the breadth of Namco's arcade catalog and not just the usual hits, and while the game itself doesn't offer much to people who don't like hammering the hell out of a shot button, there's enough residual Genpei Toumaden-esque charm to warrant at least one playthrough.

Useless fact: Despite the game never leaving Japan, the movie did in fact get an overseas release under a few different titles, most notably Cyber Ninja. Incidentally, this work was the directorial debut of the now-renowned tokusatsu director Keita Amemiya, and his cult film Zeiram was produced as a super low-budget backup when his plans to make a Mirai Ninja sequel fell through.

What's this? The first official release of a cancelled mid-'90s arcade game by Wonder Boy/Monster World creators Westone, developed for Sega's System 18 arcade hardware but scrapped after numerous fruitless revisions and location tests; restored from barely-functioning binaries by Steve Snake and Ratalaika Games in consultation with the original developers, this release presents the game in as authentic a state as possible, with the addition of an optional arranged soundtrack, access to the arcade board settings and a gallery of original promotional and production art.

Why should I care? You're looking to experience the absolute pinnacle of character animation and pop visuals possible on Sega's then-humble System 18 hardware, and you're comfortable evaluating it in its current context of "breezy console game you can play through in one sitting every so often" and not as the undercooked arcade experience it would've offered in a '90s game center.

Useless fact: An earlier version of this game had originally been designed for a proposed three-player cabinet that ended up being canned, which forced the game's most major revision into the title available today.

What's this? A two-and-a-bit-pack containing Cave's popular gothic horizontal bullet hell shooting game Deathsmiles, originally released in arcades in 2007 and subsequently ported to Xbox 360, iOS and PC, the Mega Black Label revision and the lesser-played, Christmas-themed Deathsmiles II, originally released in 2010 with an Xbox 360 port released the following year in Japan and in North America in 2012 as a digital exclusive. This collection includes authentic ports of all three games and their attendant arrange modes and promises further accuracy to the arcade versions over the somewhat maligned X360 and PC ports, and also boasts a new training mode feature and online leaderboards. Additionally, this version exclusively offers five additional playable characters from Deathsmiles' sister game, the shockingly popular Japan-only mobile shooting game Gothic wa Mahou Otome, as paid DLC. (A Switch port was also released in Japan today but it was hit with last-minute delays overseas; it'll be out worldwide on December 30.)

Why should I care? Deathsmiles is far and away the most widely played game in Cave's catalog, so odds are it's the only one many people even recognize, let alone enjoy (and I'd wager that just as many people have no idea that there was ever a sequel), and while it's not without some small discrepancies, it seems like the ports themselves acquit themselves respectably. As for the extra DLC, it represents the first introduction of Gothic wa Mahou Otome to an international audience, which is significant given that the game has singlehandedly kept Cave afloat for the better part of the last decade, but without any of that context, you're just getting a bunch of fun and slightly overpowered characters that you probably wouldn't realize were from another game if they weren't telling you so..

Useless fact: One of the more notorious issues with the North American version of the X360 Deathsmiles port was the complete absence of slowdown, which was removed at the request of the publisher, who didn't understand that not all slowdown was a technical deficiency and that suddenly allowing a very hectic game to play at a much higher speed made it incredibly difficult to play in any capacity, much less in accordance with the original version.

What's this? The latest ports of Love-de-Lic's incredibly influential "anti-RPG" adventure game, originally released exclusively in Japan for the Sony PlayStation in 1997 and finally localized for international audiences via last year's Switch port, produced by several of the original developers at Onion Games; the Switch version offered a fairly direct conversion of the original PS game and these new ports are almost identical, save for a new display toggle for unfiltered pixels.

Why should I care? Putting aside the fact that this was one of the most heavily-demanded yet unrequited fan translations for a good two decades, this is the missing link between a bunch of quirky old adventure-esque games you've probably played (Chulip, Chibi-Robo and Freshly-Picked Tingle's Rosy Rupeeland, to name a few) and a handful of newer ones that, in some cases, were influenced by the game by conceit alone (Undertale!) and it hold up admirably, provided that you understand from the jump that it's not an RPG.

Useless fact: The original version of moon contained a scrapped additional ending that had been uncovered and extensively discussed by fans and the creators in the years following the game's release, and Onion Games went as far as implementing that game in the new port before deciding against it and pulling it out again... but who knows, now that it's on PC, someone might dig it back out again. 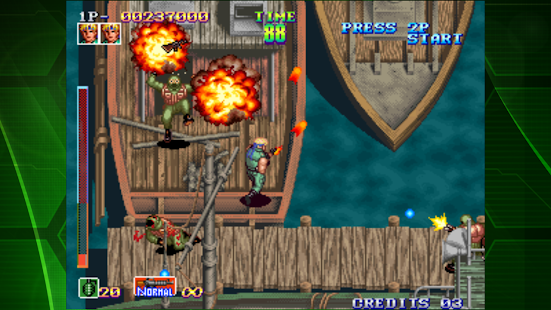 The Neogeo's finest run-and-gun (sorry, whichever Metal Slug you like) is now available to play on your telephone. Note: "available", not "advisable".

The obscure turn-of-the-millennium PC adventure game Garage: Bad Dream Adventure has long been a particular point of interest for a variety of enthusiasts, not just as a Japan-only curio or a prominent entry in a short-lived milieu of opaque, idiosyncratic adventure games that includes Kowloon's Gate and Baroque but as a prominent target for lost media aficionados due to its extreme scarcity, and thanks to a successful crowdfunding campaign by original creator Tomomi Sakuba, Garage has not only been made available to the broader public once more but in a fully localized and completely remastered form that adds heavily revised and re-rendered visuals, completely retuned difficulty, a modern UI and many, many quality-of-life features (like a map! oh, a map!), as well as a massively expanded script that includes multiple new quests and an additional ending — it's not only literally playable but practically, too. (Ports to other, non-telephonic platforms will require a UI redesign and are contingent on the financial success of these mobile ports, apparently.)