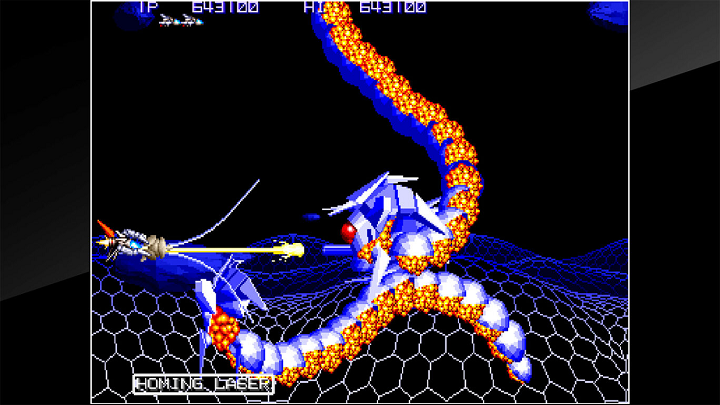 What's this? A horizontally-scrolling shooter from the team behind Gradius II, originally released in arcades in 1991 and reissued just once as part of the Japan-only Salamander Portable compilation for PlayStation Portable in 2007; developed for a one-off, relatively hi-spec arcade board, this game distinguished itself from Konami's other high-profile horizontal shooters with advanced graphical effects, voiced interstitial cutscenes and, most notably, a game system centered around a detachable "Flint" that operates in a broadly similar fashion to that of rival series R-Type. (Also included as part of this package is the overseas revision, titled Orius, which features substantially reworked stage design and broadly increased difficulty, a life bar instead of lives, large changes to the weapon power-up system and a simultaneous two-player option, among other changes.)

Why should I care? Xexex is a game with a very fractured identity — there's zero cohesion from stage to stage, the craftsmanship of the sprites and environments clashes with the amateurish cinematic illustrations and the dissonance of the Irem-esque gameplay never quite fades — but despite that "student project shooting way above its weight" vibe, the core game design is as solid as any of Konami's better arcade shooters, and it's full of little visual flourishes that are just plain neat, lacking in context as they may be.

Useless fact: A certain line from Xexex's antagonist Klaus went on to become something of an in-joke within Konami, with references appearing not only in various Parodius games but also Metal Gear Solid 2 and, by way of former Konami alum, Nintendo's StreetPass shooting game Streetpass Squad/Mii Force.

Why should I care? As far as I can tell, the majority of the graphics are recycled from the arcade games and the AI cheats as blatantly as ever, so this seems like as authentic a Suchie-Pai experience as could be expected from a feature phone.

Useless fact: This is the first Idol Janshi Suchie-Pai series reissue on consoles, off the top of my head, but a HD remaster of the second arcade game has been in the works for some time.

What's this? Part 9 of this popular detective adventure series, originally released for Japanese feature phones in the mid-'00s; this episode's a prequel set eight years before the death (not a spoiler) of one-time detective assistant Ryoji Sagashima.

Why should I care? My understanding is that this episode fills in a lot of the back-story of many of the series' antagonists... but I'm way too backlogged to be able to state that with any degree of certainty.

Useless fact: There's, like, a dozen more of these games.

What're these? A trio of Genesis stalwarts — the notorious American pack-in, AM2's beguiling fantasy RPG and Treasure's inventive toy-themed action-platformer — as well as Johnson & Voorsanger's impossibly '90s roguelike and, as a relatively new addition to the commercial Mega Drive legacy catalog, the first console entry in Technosoft's beloved shooting game series, Thunder Force. (The Japanese app received all the same games, but it should be noted that the Japanese version of Dynamite Headdy is far easier and more forgiving than its overseas counterparts and better reflects the designers' intended level of challenge.)

Why should I care? Contrary to the claims that follow every Genesis-centric reissue, these games aren't all rehashes of things you've been given a hundred other ways over the last decade or two: Thunder Force II hasn't been re-released since the Saturn days (and only in Japan at that), and ToeJam & Earl isn't outright owned by Sega, so it's only included in some of the ubiquitous compilations, as opposed to all of them.

Useless fact: The Mega Drive received less than a dozen games during its first year of sale in Japan, and of those game, Thunder Force II MD was the sole third-party offering.

What's this? A remaster of an obscure, cartoonish 2D fighting game, originally developed by a small group of Italian teenagers dubbed "Nasty Team" and barely released in 1997. Helmed by the original programmer, this new version updates the game with many bug fixes and glitches, including the re-implementation of moves that went unfinished or simply didn't work properly in the original release. (A wider release for PC, Switch and PlayStation is scheduled for early next year.)

Why should I care? Fight'N'Jokes' visuals far exceed the standard of the typical '90s European PC fighting game (and not just because they clear the ankle-high bar of not being Capcom/SNK sprite edits), and by many accounts it's actually reasonably playable to boot.

Helpful tip: The developer intends to update the game with GGPO rollback netcode in the near future; for context, this is the high watermark for freely-available netcode and one that many commercial games with drastically bigger budgets and potential audience still aren't able to match.

Since the very first Game Boy entry in 1991, the Wizardry Gaiden sub-series cemented itself as the premier Japanese strain of the beloved dungeon-crawling RPG series, and now international audiences are finally getting their first official taste of Wizardry Gaiden with this remaster of the final entry in the series, originally released for PC in 2006; the current version features English menus but does not currently feature translated scenarios or other text, so bear that in mind. (The heart of this particular game is its very extensive campaign/scenario editor, for which hundreds of custom campaigns have been created, all of which will be made compatible with this remaster; unfortunately, due to inferred rights issues with the owners of certain early Wizardry games, the scenario editor has been cut from the current build and will eventually be distributed separate from the Steam executable, if and when it's made available.) 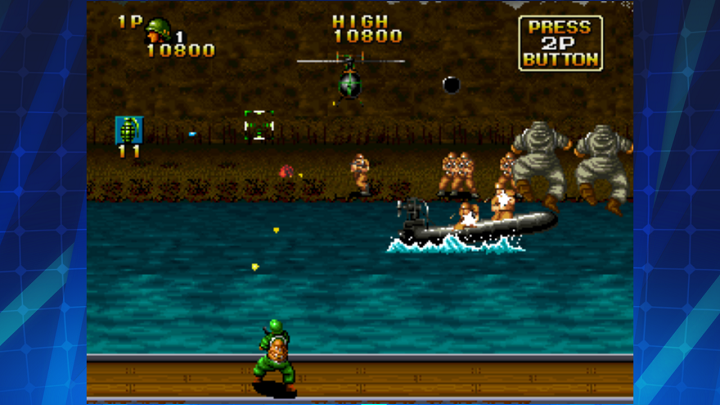 It's only been five or six games and I've already become a broken record about this but I really struggle to believe this game in particular — a game with manual crosshair aiming that already felt somewhat disconnected on joystick — being the slightest bit comfortable to play with virtual controls, but if you feel otherwise, by all means, speak up.